by JPRetana
posted on 9/17/22
in
Above Suspicion 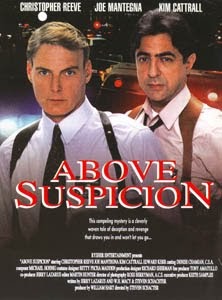 Life imitates art and art imitates itself. Above Suspicion is a Double Indemnity variation in which Christopher Reeve plays a cop who ends up in a wheelchair after a bust goes wrong; “Ironically, it was filmed a year before the tragic accident that would make him a quadriplegic” (according to an All Movie.com writer whose definition of irony comes from the Alanis Morissette Dictionary).

Dempsey Cain (Reeve) is an exemplary detective, unlike his younger brother Nick (Edward Kerr), the sound of whose beeper during a raid results in a near fatal shooting for Dempsey, who survives but is paralyzed from the waist down. Nonetheless, Dempsey lies and says it was his beeper that caused the commotion. Why? “You are my brother… You would do it for me.” I wouldn’t be so sure. What Nick does do, without Dempsey having to ask him, is satisfy his sister-in-law Gail’s (Kim Cattrall) sexual needs — or, to be exact, continue to satisfy them as he had been doing since before Dempsey’s accident.

Depressed at the prospect of being a half-husband and half-father to his son, Dempsey takes out a $1 million insurance policy that "pays double if I die an accidental death" (as in... Double Indemnity??? Coincidentally, Fred MacMurray also appearead in a film titled Above Suspicion, of which this one isn’t a remake), and orchestrates a plan wherein Nick and Gail will pose as burglars who break into the house and dispatch Dempsey to the afterlife, putting him out of his (meta)physical misery and them out of any possible economic misery.

The question is, why would Dempsey trust good-for-nothing Nick with something so important? And the short answer is that he doesn't; screenwriter William H. Macy (yep, good ol' Bill Macy) throws us a curveball, all the more diabolical thanks to Reeve's surprisingly counterintuitive casting.

Sadly, this is where it all starts to go downhill, even with the ever-effective Joe Mantegna in the Edward G. Robinson role. Loose ends are not only forgivable, but practically mandatory in (neo) noir — which is undoubtedly the genre that Macy was aiming for (it had to be; in any other context the name Dempsey Cain would just sound ridiculous) —, and Above Suspicion certainly doesn't stand up to close scrutiny.

That said, what I really have a problem with is the ending, or lack thereof; rather than end, the movie simply stops with an abrupt anticlimax which makes me think that either Macy didn't bother to write a conclusion, or director Steven Schachter didn't bother to shoot it. Instead we get a hackneyed courtroom scene, complete with a key witness (except for the 'key' part). Even the awesome image of Mantegna stabbing Reeve in the thigh to prove his point results in disappointment.

It's a shame, because Macy at the very least hints at the potential to be as interesting a writer as he is an actor. Even without his and Mantegna’s pal David Mamet's ear for dialogue, Macy has a gift for taking familiar themes and putting an unexpected spin on them; on the other hand, we expect a third act in a film, and just because the protagonist can’t feel his feet doesn’t mean it’s okay to leave us waiting for the other shoe to drop.
» More about Above Suspicion
» More reviews of Above Suspicion
» More reviews by JPRetana