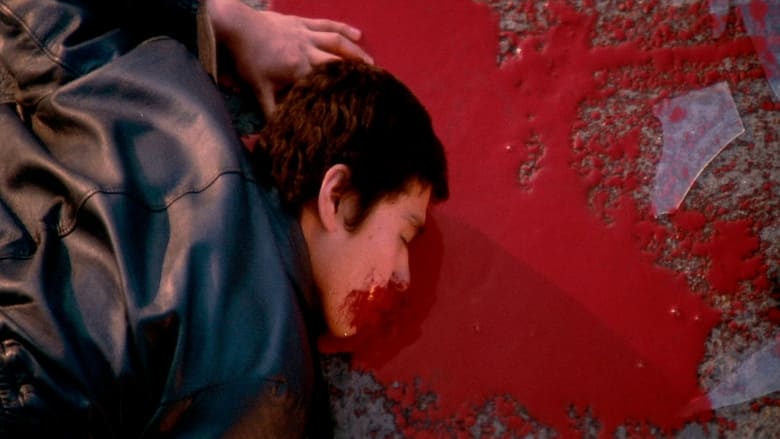 After the death of Bruce Lee, there was an attempt to market Sonny Chiba as his successor, yet comparing Lee's work to The Street Fighter and its sequels, their presences couldn't be more different. Lee's characters carried themselves with a certain dignity and swagger. Chiba's protagonist is brusque at the best of times, animalistic when he goes to work. Lee as a fighter was graceful, measured. Chiba, as the American poster for The Street Fighter suggests, fights dirty. When you see Lee in the climaxes of Enter the Dragon and The Way of the Dragon, you can see how storytelling, mise en scene, philosophy and choreography come together. Chiba in combat is a man possessed, an instrument of violence. If Klaus Kinski could do karate, one expects it would look like this. Both of their films have their share of blood, but Chiba relishes any opportunity for additional brutality.

And I think that gets to the fundamental difference between the characters they played. Lee's heroes are just that: heroes. There's a reason he's been an aspirational figure for decades. In these movies, Chiba's character is at best morally compromised and at times capable of evil. When The Street Fighter opens, Chiba rescues a death row inmate from execution. But after the inmate's brother and sister are unable to pay up, Chiba gets in a fight that leads to the brother's gruesome death (Chiba's culpability is questionable as the brother accidentally leaps out the window) and then sells the sister into sexual slavery (Chiba's culpability is undeniable in this case). This is supposed to be our hero? But as the movie progresses, we learn that Chiba himself was once the victim of great cruelty, his father having killed by Japanese occupying forces in China after being suspected of espionage. The movie brings this up not to excuse him but to frame him as an arguably tragic figure. He metes out cruelty because it is all he knows.

All of this creates a certain amount of poignancy in his efforts to do noble deeds, which frequently end in tragedy, although a certain patronizing quality does emerge in Chiba's treatment of the female characters. The second movie, The Return of the Street Fighter, has him warm up to a denim-clad orphan whom he tries to keep at an arm's length, while the last movie, The Street Fighter's Last Revenge, has him pushing away an interested suitor, telling her "You're not the girl for Dracula." (He then puts on a mask with fangs, and at several other points dramatically removes his mask Mission: Impossible style.) He also turns down a request to take another mercenary played by Etsuko Shihomi under his wing, with this amusing but also offensive exchange.


"You fight well for a woman."

"So what if I'm a woman? I'm Huo Fong, a fire bird from Taiwan. A lone wolf killer like you."

"I don't care if you're a fire bird or a grilled chicken."

"You're ten years too early to fight against me. Put on your makeup and start husband hunting. You're not too bad actually."
Shihomi also played the woman who was sold into sexual slavery in the first movie, and no, this isn't the same character. Shihomi and Chiba reunite in Sister Street Fighter, and while I don't recall their character names, I'd wager they played different ones there too, because if they were the same, Shihomi's character would have had a superhuman ability to turn the other cheek.

I think a political dimension can be read into the movies as well. The first movie has Chiba face off against an international crime syndicate, the second one brings in a sort of non-aligned movement of karate clubs in different countries, and the third has a political corruption plot. How coherent this is in terms of a left-right spectrum I cannot say, but it evoke a certain disaffection that might have been felt in Japan at that time. In that context, Chiba's perverse professional code comes into focus. If you pay him, he will do the job, no matter how dirty. If you try to rip him off, watch out!

But ultimately these movies are an excuse to watch Chiba **** people's shit up, and in that sense, they're quite diverting. These are '70s Toei productions and as a result feature some very handsome widescreen cinematography, which makes the violence more startling. Chiba throws his opponents against the cramped edges of the frame in the rough and tumble fight scenes, which are punctuated with bursts of ultraviolence (an x-ray shot of a crushed skull, eyes popped out by a punch to the back of the head, other assorted Fulcian eye trauma, castration, ripped throats and more). In that sense, the first film is the best as it metes out the gore with the most frequency and gusto. (It was famously slapped with an X rating for violence alone.) The climax, drenched in rain for added dramatic flair, has Chiba tearing out his opponent's throat and holding it up to the camera in a flourish that imitates 3-D. Folks, this is what we go to the movies for.