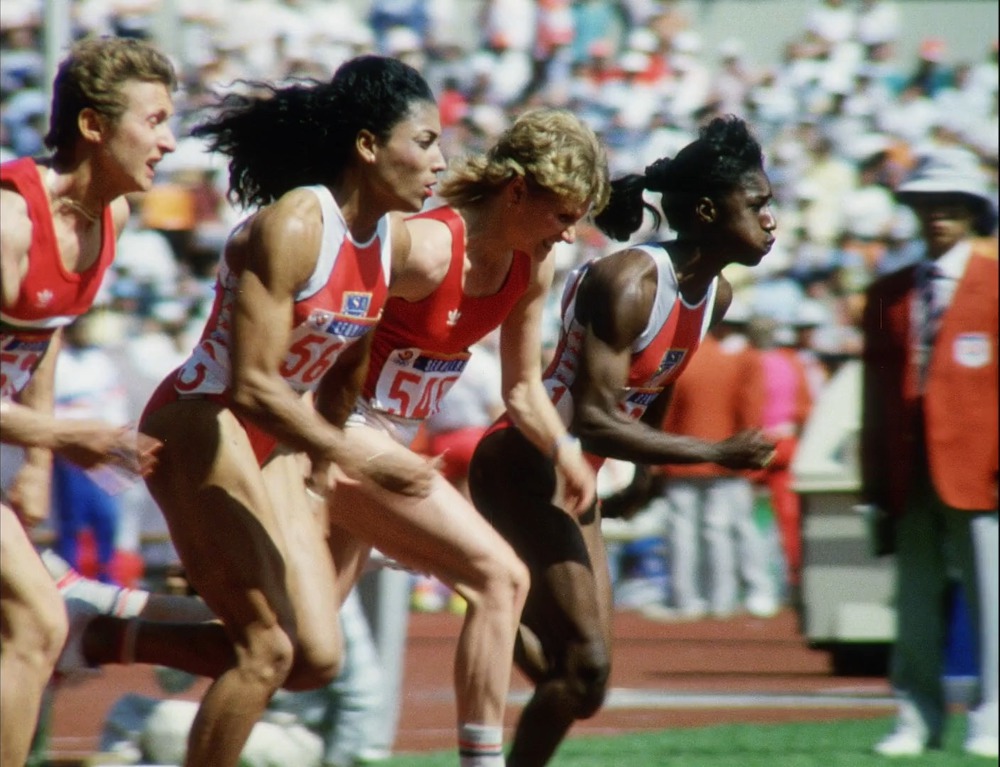 This documentary covers the events of the 1989 Olympic games, with special emphasis on some of the more hard-fought events.

Now THIS is more like it, for me. Opening with historical footage of the conflicts that have shaped Korea for the last several decades, the film acknowledges the Olympics as a place where the East and the West can meet peacefully in the spirit of sport. From there, the film zooms in to examine the accomplishments of certain athletes or teams.

One thing that I loved about White Rock was the way that it made us feel the sport. This took the form of host James Coburn trying out the luge and other events. While Hand in Hand doesn't quite go to that ground level, it heightens the sensory details of the competition. We hear the loud splash of swimmers entering the water. We hear the grunts and screams of the men and women throwing javelins and shot puts.

The film also doesn't feel the need to go in for propaganda and make everything all "rah rah". The documentary explicitly calls out the doping that took place among certain athletes. If there are unsavory things that were part of the games, it doesn't feel here like they are being swept under the rug.

But really the exceptional part of this documentary is the way that it seems to have been built specifically to withstand the passing of time. There's no assumption that you'll know who the different people are, or even the political context of the time. I really appreciate the explanation that two of the female sprinters were rivals, but that political pressure on South Africa over apartheid meant that one of them was not able to compete at Seoul. We see flashback footage explaining that the two women had an incident in a previous race that meant people were really looking forward to the rematch that just never came to be.

The narration gets you up to speed on what is at steak for different individuals or groups. We learn that before the USA basketball team lost to Russia in an upset, they gave medical assistance to a Russian player. The USA coach made a remark at the time about how helping him was sabotaging themselves, and he was proved right. These little nuggets of background add weight and interest.

This movie really felt like watching a truly expertly crafted highlight reel. We see certain people set records in various sports. Before Greg Louganis dives, we are shown previous footage of a serious head injury he sustained during the preliminary rounds of the competition. As Louganis prepares his competitive dive, the camera lingers on him for a good long while. It's this mix of giving us an overview and then sometimes slowing down to savor a moment--either before or after an event--that makes the film feel dynamic.