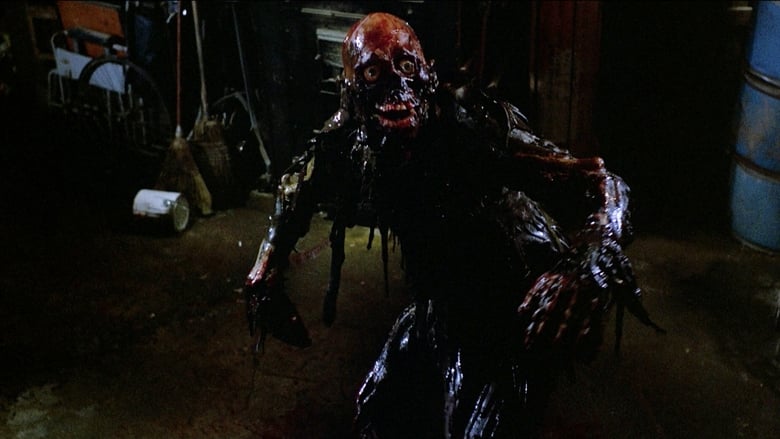 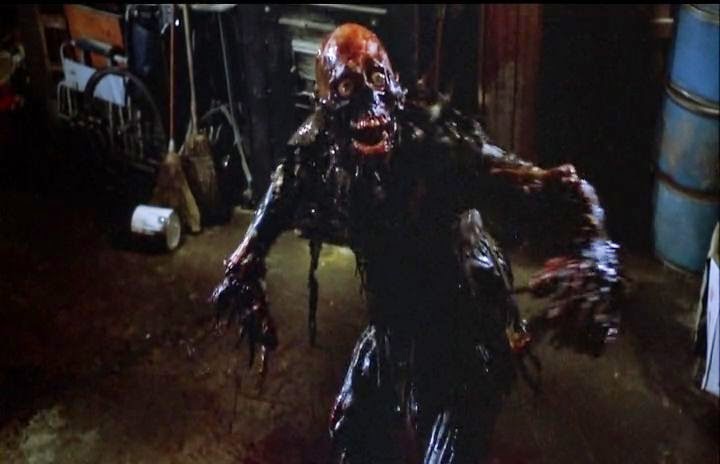 Freddy (Thom Mathews) has just started a new job at a sketchy medical supply company. When his co-worker Frank (James Karen) tells him about living dead creatures kept in the basement, Freddy is intrigued. But when the men accidentally crack a storage container filled with a mysterious gas, the dead begin to come back to life. Soon a squad of Freddy's punk friends, his girlfriend Tina (Beverly Randolph), and a local mortician (Don Calfa) are up against a whole gaggle of reanimated corpses.

Okay, yes, thank you. THIS is a horror worthy of October!

You know, it's really rare that horror films are able to balance heart, scares, and comedy, and it's such a delight when it works out as well as this.

To start with the comedy, the film scores on multiple levels. The practical effects are gruesome, but also comedic. Early on we see a reanimated half-dog. Zombie heads are knocked off with aplomb. The characters rely on their knowledge of other zombie films--Night of the Living Dead is repeatedly and explicitly referenced--to survive, and express annoyance when the zombies don't follow the "rules".

The comedy also works as the film develops an entire host of weird, engaging characters. Freddy, the dopey young man. Ernie, the local mortician who might also be a Nazi? Frank, who responds to the effects of the gas with a mix of world-weary "of course" vibes and middle-aged grumpiness. Tina, the "nice girl" who tries to stand by her man, even as the gas begins to take a serious toll on him. Clu Gulager is also a standout as the owner of the medical supply company who will do anything to avoid involving the authorities. Heck, even the two unnamed paramedics who show up halfway through the film make an impression as they have a whispered conversation to discuss a disturbing lack of vital signs in a patient.

On the scares front, the film hits just the right pitch. The creature in the image at the top of the review is called Tarman, and his lurching-but-intentional movements are at once comedic and frightening. This film takes the novel approach of having the zombie move quickly and actually be intelligent. They can speak and reason, leading to some shocking sequences where the monsters we expect to be lumbering blank slates turn out to have personalities and some devious plans. There is something particularly horrifying about the progression of Freddy's reaction to the gas, and several characters face horrible demises.

But mostly the film has heart, and that's what really makes it stand out. Yes, on one level it is very cynical. Yes, there are several "throwaway" deaths of characters. But there are also several deaths that are tragedies--and the film isn't afraid to linger an extra moment or two for us to mourn and appreciate this. We see it in the way that Tina holds Freddy as he breaks down over what is happening to him. We see it in little moments, like a character pondering a mercy killing when things begin to look particularly bleak. The characters might in some cases be caricatures, but their interactions and personalities (over the top though they may be) make you care about them.

This film is what I was hoping Night of the Demons would be. It has great momentum and it balances absurd deaths and set-pieces with a genuine affection for its characters. This was a lot of fun, and a real pick-me-up.