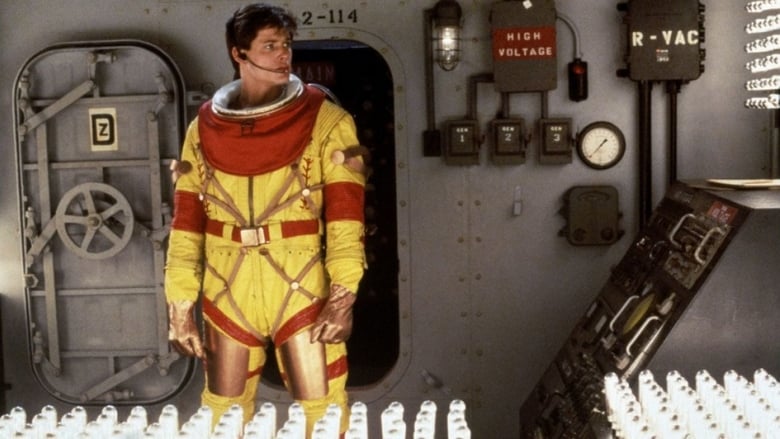 by Torgo
posted on 9/10/21
in
The Philadelphia Experiment -

A movie that could be described as Back to the Future before Back to the Future - it even has a joke about Ronald Reagan being the president - The Philadelphia Experiment is not the classic that that movie is, but it has enough going for it to make it worth checking out. It is based on a myth about World War II battleship U.S.S. Eldridge, which may or may not have been equipped with experimental radar-deflecting technology. Once activated, crewmen David Herdeg (Michael Paré) and Jim Parker (Bobby Di Cicco) find themselves in 1984. With the help of unwilling accomplice Allison (Nancy Allen), they look for a way to return, all the while dealing with the future shock of everything from television to pop-top cans of Coke.

Much of what makes this movie work and worth watching is Paré's performance. He is very convincing as a man who is out of place, looking for answers and unwilling to become a pawn of scientists and the government, all of whom pursue Jim, Allison, and himself pretty much as soon as he arrives in the future. His bemused reactions to modern conveniences also made me laugh while his more grieved ones, like seeing pictures of himself on a wall in his father's mechanic business, became my own. The special effects are not half bad either, especially the all-consuming vortex in the sky which is an unfortunate byproduct of the Eldridge's failed experiment. The high-contrast lighting that accompanies the time shifts, on the other hand, has not aged well, but it at least gets its purpose across.

What prevents this movie from being a classic time travel story? In spite of its real-life inspirations and relatively unique vehicle, it's a pretty standard entry in this subgenre. It also doesn't help that much of the science, ramifications of going to the future, etc. are sidelined in favor of David and Allison's romance. Despite not totally coming across like a Stockholm Syndrome case as well as Paré and Allen's chemistry and strong acting, I felt that it marginalized a lot of the technical mumbo jumbo, which to me is the "good stuff" that is a perk to movies like this one. Also, while I've praised the effects and some of the acting - Steven Tobolowsky also impresses in an early role as a scientist - it often resembles a TV movie from its era and the general performance is of average quality at best. I still enjoyed it and it scratched my itch for good sci-fi, but if you somehow haven't seen that other time travel movie that came out the following year yet, watch it first.
» More about The Philadelphia Experiment
» More reviews of The Philadelphia Experiment
» More reviews by Torgo