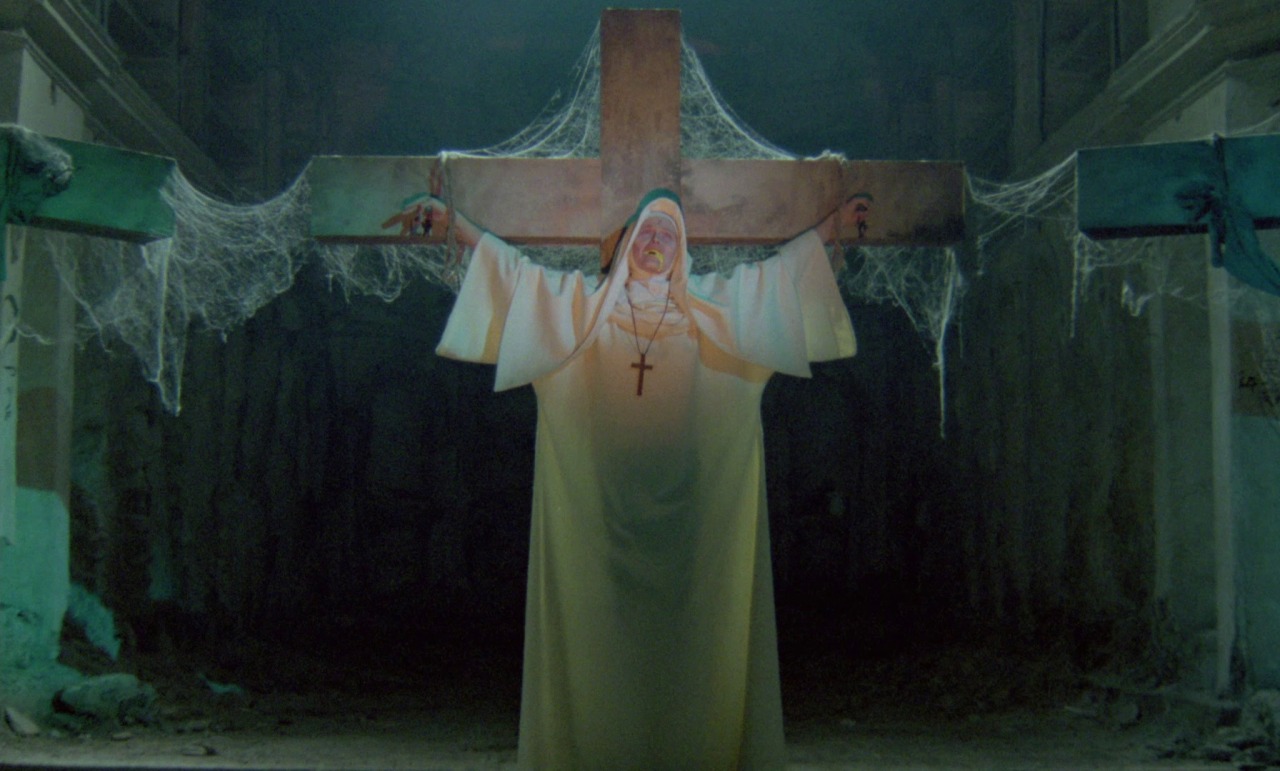 I recently watched a documentary called Fulci for Fake, which, as you can guess, is about the life and career of Lucio Fulci. While the movie is light on clips and features an ungainly framing device, it is fairly illuminating in showing how personal tragedies tied to his work. The death of his wife preceded his move into violent thrillers in the early ‘70s. An accident left his daughter paralyzed right before he made The New York Ripper, which gives what I’d initially considered an unrelentingly vicious movie a certain level of poignancy. Fulci’s career is generally considered to have gone into decline by the latter half of the ‘80s (during which time his health also suffered), with Cat in the Brain representing a sort of last hurrah. I’d perhaps been a bit condescending towards the movie when I saw it a few years ago, but I do admit to having been charmed by its reflexivity and playfulness, and it’s a movie that I think gets better in the context of his career than on its own. But even movies like Aenigma and Touch of Death, which I don’t think are especially beloved, I managed to enjoy, perhaps due to lowered expectations, but the fact was that the technical command and sense of raw terror of his best work was not entirely present in those films.

Now the reason I bring those up is that Demonia, which from what I gather most Fulci fans have no special love for, has certain qualities that are muted in its finished form but are brought into focus when viewed in the context of his career. Perhaps feeling a bit re-energized after Cat in the Brain, Fulci invites comparisons to his two best films with the opening sequences. A flashback to the crucifixion of nuns brings to mind the brutal opening to The Beyond, while a seance recalls the almost cheeky introduction to City of the Living Dead. But where those movies start at the same place and build to an apocalyptic level of dread, Demonia kind of stays at this level all the way through. Individual acts of violence basically remain as individual acts of violence, lacking the energy in presentation or almost free-associative delivery of those earlier films to develop into any kind of atmosphere. Fulci at his best combines a sense of high and low horror in a way that compounds the power of both, but the horror here seems unfortunately literal minded, especially as a decent amount of the kills are basically accidents (two characters are lured by the sound of the nuns’ spirits and fall to their deaths in some already dangerous-looking ruins). Still, there is at least one memorably nasty kill, presented with delivery that should seem clumsy but comes across the film tripping over itself to gross you out, and another that’s endearingly goofy and brings to mind The Black Cat.

The movie was supposed to be a comeback of sorts for Fulci into the theatrical big leagues but alas was banished to direct-to-video, and the generally cheaper looking but not hackish cinematography supports this. Framing is not as razor-sharp as his best work, and the much of the film has that gauzy look that figured prominently during the ‘80s. Yet seeing it in a nice, restored high definition transfer, the nighttime scenes are evocatively lit and give the film a respectable level of atmosphere. The film benefits greatly from being set in a coastal town and what could very well be or at least pass quite convincingly for actual ruins, which add to the film’s ambience and compensate for other weaknesses. As a Torontonian, I can’t help but give it points for featuring characters from a real local university (not my alma mater, but I’ll forgive it) and having one character wear the beloved Canadian brand Roots. And while the lead actress wasn’t particularly good (although she does nail that squinty, curious look necessary for this kind of movie), late Fulci collaborator Brett Halsey makes his character feel convincingly lived in, and it was nice seeing Demons punk Lino Salemme, Fulci regular Al Cliver and Fulci himself make appearances. I often think of the comfort I get from Italian horror movies and their distinct feel, and despite Demonia’s shortcomings, it has those qualities I find endearing in spades.