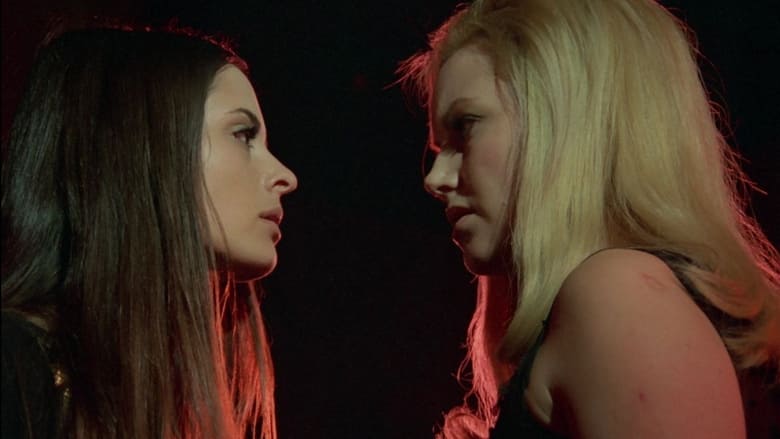 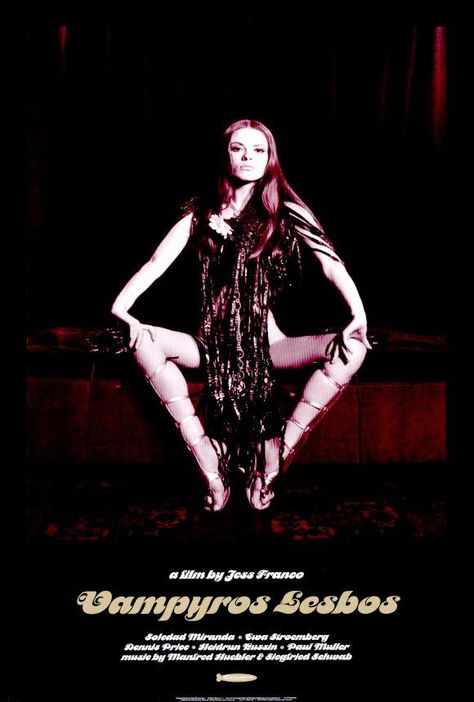 Just a couple days ago after watching yet another MST3K episode: The Castle of Fu Manchu, I found my new choice for the worst movie I had ever seen, a dishonor previously held by a movie I reviewed earlier: Santa and the Ice Cream Bunny. Because of this, I decided to check out other movies by this same director: Jesus Franco, a.k.a. Jess Franco. And every time I look up a new director, I check out the best, the worst, and the most popular. In the eyes of some fans, the best and most popular seem to be the same movie: Vampyros Lesbos.

This movie gives you exactly what the title advertises. A woman and her boyfriend are checking out a nightclub act, and the woman, Linda, is hypnotised by one of the women, who turns out to be a vampire seducing her in order to feast on her blood. A relationship sparks between the two, if not a forbidden hypnotic one. But this goes far beyond a simple cheesy romance. Another woman has been seduced by her, and now she's under the care of a psychiatrist who wants to enter the world of the supernatural and contact this mysterious vampire lady for that purpose! And if that doesn't make things bad enough, the patient's husband has gone mad, too!

I feel that to best review this movie, I'll have to dig right into the four questions I ask myself with every movie. However, I need to admit this. I'm also writing this review to prove a point. About a half-an-hour in, I got invested in a conversation and paused every five to ten minutes to reply (I don't like keeping people waiting for replies). Of course, the revalation stemmed a pointless argument which ended in me being belittled for my decision. I'm gonna prove that it's possible to watch a movie in parts and get the full experience.

Now for the four questions:

Well, it's a pretty simple movie by a simple director who makes B-movies, indie movies, nudie movies, you know, the guy who doesn't put that much effort into his movies because he feels like he doesn't need them. In the case of this movie, it's a combo of all three. It's a horror-infused LGBT romance movie with Gothic style to it, and it's supposed to get you a little horny now and then, even though this aspect is largely forgotten by the last twenty minutes. So I'd say the goal is basically to be a cashgrab for the sellouts who don't like big-budget sellouts. Indie fans, B-Movie fans, nudie fans, etc.

Ummmmm by technicality it did based on the fact that any cashgrab or simple movie could meet its goal by default. But I felt like the movie could have been so much more, and done more with its combination of genres. It's a fairly unique premise which could have done something big for a movie coming out at a time when homosexuality was becoming much more mainstream. I mean, for combining three scenes at once, it shouldn't be so easy to make, should it? So I'd say it partly succeeded based on merit, but not based on the art of cinema itself. I know that sounds pretentious, but even really simple movies can succeed, like the plotless Halloween which I found to be an effortless success in less effort. I can't say that effect was apparent in Vampyros Lesbos.

3: What did it neglect or sacrifice to meet its goal?

Well, considering that Franco made like three movies a year (not kidding, he has roughly 180 movies in a 54-year career), I'd say the big sacrifice is that he didn't put in enough effort. Most of the scenes in the first half are acted in a half-assed manner. The nightclub scenes are supposed to be really sexy, right? This does have nudie scenes, after all. But the acting was so underperformed that I didn't really feel anything. I mean, I'm straight, and I really do prefer the boobs on a sexual level. But this didn't to anything with that. For a "sexy" movie, ithad decent scenes and meh scenes. Not to mention, this so-called "horror" movie wasn't scary. I'll always take that into account. Sexy scary can be a really effective thing, much like Bram Stoker's Dracula, but Franco didn't even try...

I will say this in its defense. Most of the Jess Franco movies I've seen have a garbage plot with terrible editing and no consistency, if that constitutes as a plot. But this time, there were some attempts to bring out a decent plot, and although it failed in some ways, I was really engrossed in the last half-hour of the movie. Mad psychiatrists reigning a looney-bin, kidnappings, murders, and it all felt right in tune. So even though the plot wasn't great, it was PERFECTLY CONSISTENT with the mood and the atmosphere set, and this has a stronger atmosphere than some Franco films. So I respect it for that.

4. Were the sacrifices and neglected aspects made up for by other aspects of the movie.

No. This was a really simple movie that didn't even try to be a five-star movie, so I'm not even gonna consider that it's "proper cinema" or that it's trying to be. It's a sellout for hipsters, and that's all I'm gonna judge it as.

Well, Vampyros Lesbos isn't my favorite of the select few Jesus Franco movies I've seen (although the number will increse), but I understand if you like it. It's a dumb fun movie for people who want something really simple, like somebody who looks for an obscure pop album on Bandcamp.com (which I've done so I can understand the appeal). But I'm not gonna neglect that every aspect of the movie felt beaten by some of my favorite romance and horror movies, including Bram Stoker's Dracula and Blue Velvet.

Well, I think I was very thorough for a guy who had to pause every ten minutes.