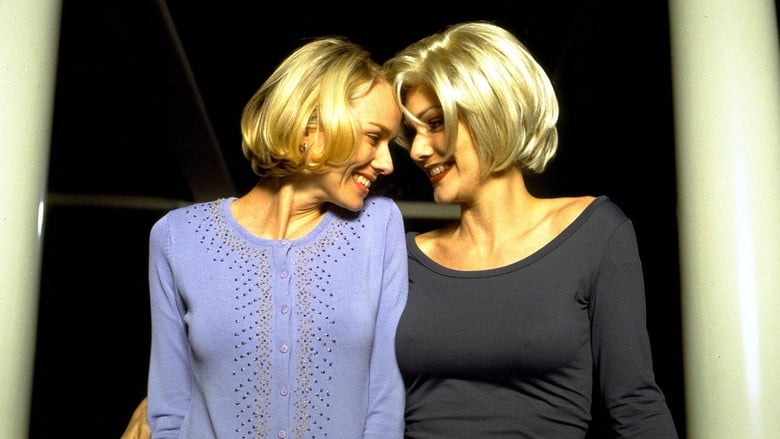 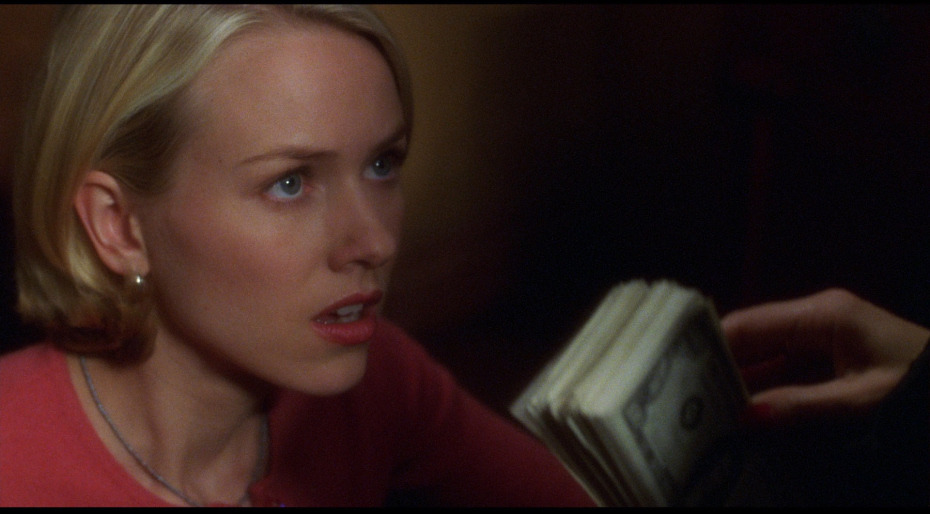 This review contains spoilers.
David Lynch's Mulholland Drive was released in recent years by the Criterion Collection, that great home video company that's probably the OG of boutique labels, known for putting out acclaimed, significant or otherwise interesting films in really nice packages. (For some reason I had been thinking they put this out only last year until I actually looked it up. I guess my sense of time has been a little warped as of late, and as much as I'd like to tie this review into pandemic-era life, the fact is other labels have captured my attention lately, as can be evidenced by my embarrassingly large and extremely shameful Vinegar Syndrome haul from their Halfway to Black Friday sale from a few months ago.) Now, nobody in 2021 is going into this movie truly blind, but if I happened to pick up the Criterion cover and perused the back, aside from the list of special features and disc specs, you'd see the below (which I grabbed off their website):


Blonde Betty Elms (Naomi Watts) has only just arrived in Hollywood to become a movie star when she meets an enigmatic brunette with amnesia (Laura Harring). Meanwhile, as the two set off to solve the second woman’s identity, filmmaker Adam Kesher (Justin Theroux) runs into ominous trouble while casting his latest project. David Lynch’s seductive and scary vision of Los Angeles’s dream factory is one of the true masterpieces of the new millennium, a tale of love, jealousy, and revenge like no other.
Now, this is a tough movie to evoke with only a blurb, but I'd say that does a pretty respectable job. I however do not own this release. What I do own is the barebones Universal DVD that was released a few months after the movie, back when going into the movie blind would have been far more likely. This is the description on the back:

Now I suppose I should say something about the movie itself, but it might be a challenge given how elusive it is in certain respects (Lynch is notoriously cagey about offering interpretations of his movies) and, as a result, how heavily it's been scrutinized over the years. No doubt any analysis I offer as to the movie's overarching meaning will come off extremely dumbassed. What I will note however, is that for whatever reason, the scene I remembered most vividly is where Justin Theroux walks in on his wife with Billy Ray Cyrus, particularly the candy pink paint he dumps on her jewellery as revenge. We've been following Theroux, a movie director, as he's been having a terrible, horrible, no good, very bad day, having had control over casting his lead actress taken from him, which he proceeds to process by taking a golf club to a windshield of his producers' car and then reacting as above when he finds his wife with the singer of "Achy Breaky Heart".

With his Dune having been notoriously tampered with by producers, I suspect there's a bit of Lynch's own experience in the scene with the producers, which plays like an entirely arbitrary set of rituals deciding the fate of his movie with no regard for his opinion or even basic logic. While I don't know how particular Dino DeLaurentiis was about his espresso, I did laugh. Now, taking the reading that the first two acts of the movie are a fantasy of Naomi Watts' character, who is revealed to be miserable and ridden with jealousy in the third act, the amount of time we spend with Theroux is maybe hard to justify. Is this perhaps her "revenge" on him, his romantic and professional success having been flushed away while he flounders in search of greater meaning to his arc? Aside from possible autobiographical interest, these scenes do play like a riff on the idea that everyone is the main character in their own story, and if the Watts and Laura Harring characters can be thought of as having merged or swap identities, then perhaps Theroux's arc is the remainder of that quotient. (Now, it's worth noting that aside from being insecure and arrogant, Theroux in this movie is a less stylish than the real Lynch. If Watts conjures the best version of herself in her dream, Lynch maybe doesn't want his dream avatar outshining him.)

Now why did the Cyrus scene stick with me all these years when other details had slipped? Mostly because I'd found it amusing, partly because of the extra specific image Lynch produces, and somewhat because of the casting of Billy Ray Cyrus. Now, I don't have any special relationship to the Cyrus' body of work, but Lynch's casting of him, with his distinct mix of bozo, dudebro and hunk, results in a very specific comedic effect. This is something Lynch does elsewhere in the movie, like when he has Robert Forster show up as a detective for a single scene. The Forster role is likely in part a leftover from the movie's origins as a TV pilot, but the effect is similar (albeit less comedic). Melissa George appears as a woman who may or may not be a replacement for Watts in some realm of reality. Other directors obviously cast actors for their screen presence and the audience's relationship to their career, but the way Lynch does it feels particularly pointed, as if he's reshaping them entirely into iconography. The effect is particularly sinister with the presence of Michael J. Anderson, with whom he worked previously on Twin Peaks, and Monty Montgomery as a mysterious cowboy who dangles the secret of the movie over Theroux's character.

Cowboys in movies are frequently heroic presences (see any number of westerns) and are otherwise innocuously stylish (I confess I've come dangerously close to ordering a Stetson hat and a pair of cowboy boots), but the presence of one here feels like a ripple in the movie's reality. A dreamy, brightly lit mystery set in Los Angeles should have no place for a cowboy. It ain't right. (It's worth noting that Lynch at one point copped to admiring Ronald Reagan for reminding him of a cowboy. Is this his expression of a changed opinion? I have no idea, but Lynch has never struck me as all that politically minded.) Neither is the hobo that appears behind the diner. Certainly hobos have made their homes behind diners, but this one's presence and the way Lynch produces him feel again like a ripple in the the movie's narrative. Jump scares are frequently knocked for being lazy and cheap devices to generate shocks, but the one here gets under your skin.

Now about the movie's look. This starts off like a noir, and the mystery plot on paper would lead you to think that's how the whole movie plays, but the cinematography is a lot brighter, with almost confection-like colours, than that would lead you to believe, at least during the daytime scenes. This is another element that likely comes from its TV origins, but it does give the movie a distinctly dreamlike, fantastical quality that a more overtly cinematic look, like the one Lynch used in Lost Highway a few years earlier, might not capture. This is one of the reasons I think this movie works better than that one, and there's also the fact that the amateur sleuthing that drives the bulk of the plot here serves as a more pleasing audience vantage point than the male anxieties that fuel the other film. I also would much rather hang out with Naomi Watts and Laura Harring than a charisma void like Balthazar Getty.

The manufactured warmth of the daytime scenes also results, like in Blue Velvet, in the nighttime scenes feeling like they're in a completely different setting, one which perhaps offers the key to unlocking the mystery, or at least revealing the phoniness of the movie's surfaces. I think of the evocative Club Silencio sequence, which comes as close as anything in the movie to laying its illusions bare. ("No hay banda.") But at times Lynch will throw in disarmingly childlike, inexplicable imagery, like the dancing couples against a purple screen in the opening, something that would seem tacky and amateurish elsewhere but feels oddly cohesive here. There are a number of directors whose work I admire for being "dreamlike", and putting them side by side they all feel quite distinct (you would never mistake a Lucio Fulci film for a Lynch), but they have the unifying idea of imbuing the tactile qualities of film with the truly irrational to really burrow into your subconscious. Other directors have made movies with some of the same elements as Mulholland Drive, but none have put them together in quite the same way.