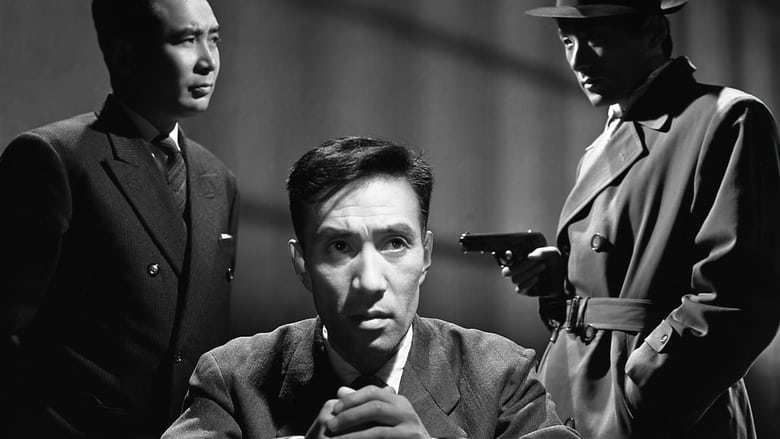 A bank worker named Takita (Nobuo Kaneko) is blackmailed by his mistress's pimp and decides to rob his own bank. Taking advantage of night guard Nakaike (Ko Nishimura) who believes the two are friends, Takita sets up the robbery with Nakaike as the fall guy.

The Criterion Channel describes this film as a "pocket-sized" noir, and that's just about right. Barely clocking in over an hour, the story unfolds with streamline efficiency, though it does take a moment here or there to let you catch your breath.

Kaneko is solid as the weaselly Takita, a man who has a trapped, feral look for much of the film. Takita is the victim of a blackmail plot, but he more than deserves a bit of comeuppance. It is an interesting sensation to watch him commit his crime, both wanting him to succeed and also being put off by the position in which he puts Nakaike.

Nishimura, as Nakaike, is his own kind of miserable. Teased and looked down upon by the other bank workers, he is an uncomfortable character to watch. When he becomes more important later in the film, the dynamic between him and Takita--two miserable, trapped men--is both compelling and uncomfortable.

This is a straight-ahead thriller that manages to pack in several twists and turns through its short run time. There isn't a lot of character development, but the momentum of this film is in the plot and so betrayals and reversals more than make up for the lack of character depth.