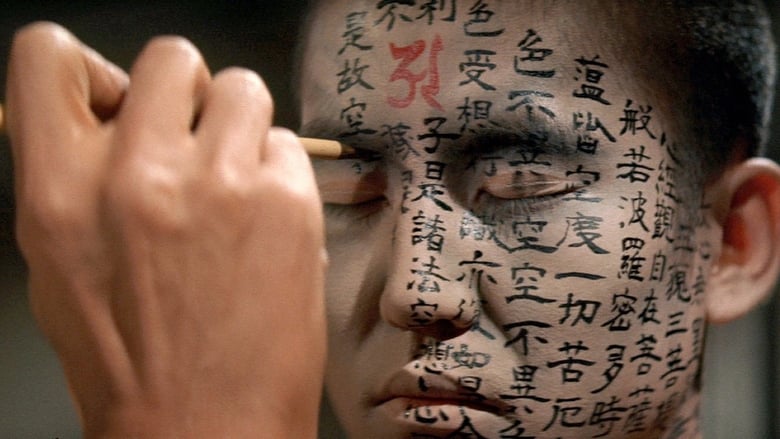 
"A collection of four Japanese folk tales with supernatural themes."

I don't know why but I always expect to see old Japanese films in b&w. So when Kwaidan first starts with those blue and red blobs of artistry, I kinda thought I had the wrong film. Nope, I had the right film...I ended up liking the use of color along with the stylized backdrops for the studio sets. At times I swear I eyed eyeballs in those backdrops...or were they just color globules and the sheer terror of the film made me image them? OK, the film wasn't really terrifying at all. Actually it felt very relaxing and meditative...and had an unhurried pacing where we get to spend time reflecting on what we're seeing. That seems appropriate to me for a Japanese cultural film that brings to 'life' the spirit stories of their ancestors. I enjoyed it for those reasons.

The Black Hair
This one was effective as the sheer guilt that a human can feel is enormous, and when that guilt doesn't subside but grows and festers over the years, that guilt can be utterly devastating. The most effective scene was when the beleaguered man returns to his first wife and they talk of grief and forgiveness. That love bond between them was strong and we see that the man has made a horrible mistake by leaving her. A mistake that will haunt him forever.

The Woman of the Snow
This segment goes very surrealistic in the set's backdrops and lighting, which adds to the other worldliness of it. While not emotionally charged like The Black Hair was, it's story is more fleshed with more set pieces. I don't why but snow covered scenes are always cool.

Hoichi the Earless
This by far was the most elaborate of the stories, it functions as a show piece for the entire movie. We're treated to a retelling of a famous sea battle between two clans, where the defeated end up committing suicide by jumping overboard into the blood filled sea. Their spirits haunt the land, with their faces appearing on the backs of crabs. I loved the music that was played on the string instrument and singing the tale was creative. But what I really liked was the monastery setting. Were the priest sure that the spirits would really rip Hoichi apart? The spirits didn't seem to be a threat. But I guess they were as witnessed by Hoichi's poor ears! When the spirit Samurai approached him and seen his ears, I thought for sure he'd slice them off with his sword...but yikes he pulled them right off. How horrible for the poor guy!