The Living Dead at Manchester Morgue 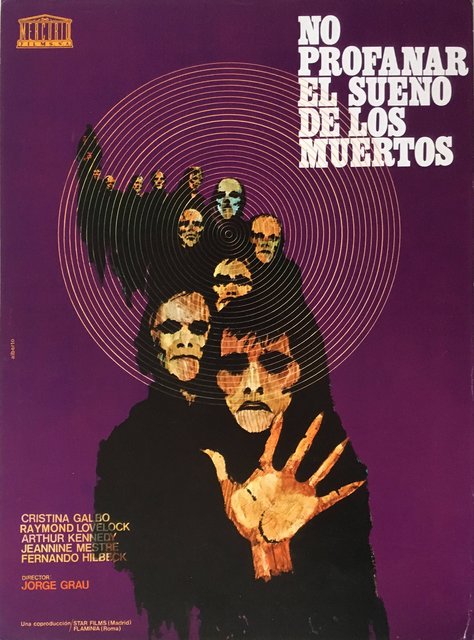 Any effective horror film should know the importance of keeping some of its mysteries to itself. To never give us the option of rationalizing our unease away. It should hope to leave something inexplicable stuck in the teeth of the viewer, something they weren’t sure they even ate in the first place. Some fleshy substance their tongue does not recognize the taste of, or even appreciate the sensation of brushing up against. It will be an important element of this kind of intrusive horror that we don’t know how it got stuck there in the first place or why it won’t come out. Its persistence should defy both logic and toothpicks.

In the case of Living Dead at Manchester Morgue though, I’ve found it extraordinarily difficult to discover exactly what mystery it’s keeping from me. What about it keeps me up at night puzzling over it. There is nothing elusive about the films structure that can explain its mysterious effect. Its narrative is both simple and familiar. It’s characters relatable and behave sensibly. Even all of its supernatural elements come with explanations provided by the best science an Italian Zombie film could possibly provide. Nothing is left unresolved to pester me. And yet it lingers, like the smell of something turning rancid in my mouth. I suck on my teeth and can still taste this film.

Because of this, I’ve been thinking about this movie a lot recently. They are the kind of thoughts that have led me to the same place over and over again; a dark room in the middle of the afternoon, where I can watch it yet again. Each time it will be upon a television situated a little further from humanity, where no one familiar with this new prison of mine can dare ask “Weren’t you watching that this morning...and last night...and a few days ago”? I hardly see how it’s anyone's business. If they truly cared about my well-being, maybe they would have mentioned the fact I am growing a little smaller with each viewing, as if my inability to find any unresolved mystery inside of the film is causing something to shrivel inside of me. It’s possible they don’t understand what is at stake here. So, as I crawl beneath a lonesome sand dune out in some desert wasteland, I will watch it yet again in complete solitude, then pick at my teeth a little and hope I will finally figure out this trick it has played upon me.

I am by now, of course, delirious. Maybe this is why upon my fifth viewing I am so struck by a moment of such irrelevance I have completely discarded it from my memory until now. The small wood carving, after all, has nothing of any particular importance to add to the film. It just pointlessly sits upon a table as the film opens, a man walking around it as he gets ready to close his antique shop for the weekend. As we leave with him through the door and watch him ride away on a motorcycle, there seems no reason we should be cutting back to an interior shot to check in on it. But this will be exactly what happens, and as the camera draws attention to the fact that it is now missing, we are left to wonder why we needed to come back in here to learn this.

As it turns out the missing statuette is not why we have come back inside at all. Instead, the cameras gaze will carry on past the empty place it once sat, and venture further into the shop, creeping ever nearer to a painting that sits overlooked on the floor. It is a portrait of an old man standing in shadows, and there is a decayed and grizzled quality to his face, although the darkness that surrounds him makes it hard to see any of his features clearly. As we draw closer to it, an unearthly sound will begin to rise up from the silence. It is like the sonar blip some haunted submarine might make as it brings its ghostly passengers up to the surface. This noise, while incongruent with the antiquated surroundings, continues to grow ever louder. It sets us on edge as our attention now becomes completely consumed by the painted image. Unlike the wooden figure, we begin to accept the fact that, yes, of course this is what we should be looking at. Concentric neon green circles begin to radiate from the center of the screen towards us. It’s becoming clearer and clearer that we are being hypnotized. That if there ever was any point to the hidden figurine, it was only to keep us off guard for the coming mind control. The film now has us in its grips.

What comes next may have been imagined, possibly only seen by those who are susceptible to the influence of these strange sounds and hypnotizing spirals. An image of a frightening looking man becomes superimposed over the film. He seems to be staring directly back at those of us in the audience. Is this the same man from the painting? It will never be made clear what the connection between the two will be, only that we will eventually meet him later in the film, wandering through the Manchester countryside and clearly a member of the undead. We will see him from a distance at first, but there is no doubt about who it is. He brings with him those strange sci-fi noises. This time it will be an electronic burbling not unlike what Dr Who’s Tardis might sound like if it had been an underwater coffin instead of a telephone booth. It grows louder and louder as the camera grows ever closer to him standing there, once again looking back at us.

With the peculiarity of its soundtrack now haunting the film, no matter how rationally the rest of Manchester Morgue depicts its zombie invasion as being, there will be an ever-present link to some subliminal influence the film has over us. Maybe everything we see, in some way, is coming from that antique shop we took one last peek into. From that painting we have already forgotten about. That we never would have looked at in the first place if the camera didn’t pretend to be so interested in that god forsaken pointless wood carving.
As the movie continues, it will prove to have all manner of these strange Pavlovian triggers tingling at our ears, maybe hoping for some kind of response from us. Sometimes it will be a high-pitched drone that overwhelms every other sound like radioactive tinnitus. Other times, it seems to have even gotten right inside of the quaint and pastoral murmurs of the surrounding environment. The cries of birds in trees, the rustling of wind, the splash of creek water running over wet stones, all seem to shiver with some kind of distortion. It turns what could seem peaceful into yet another reminder that something is wrong here. That there must be a world that can only be hinted at living just beneath the surface of this film. It’s possibly down below, where the dead are coming back to life. But it feels as if it is reverberating in our pineal glands, and as I take another mouthful of this psychedelic dune sand, I start the film over and find myself back inside an antique shop. Yes, this is where I’m meant to stay. Picking my teeth, forever