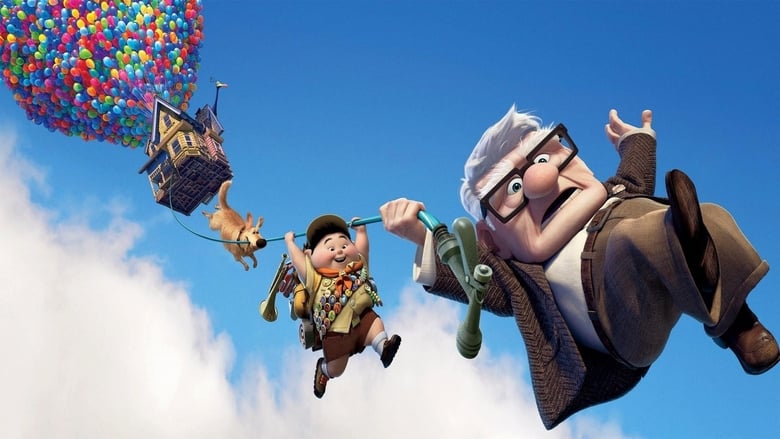 Remember when Pixar was the greatest animation studio around? Almost every Pixar movie released during their golden age pushed the envelope for animation, both artistically and narratively, and wound up some of the best works in the medium. Of course, I'm referring to the period from Toy Story up to (and not including) Toy Story 3. Pixar had gone from mastery to mediocrity, but it wasn't as sudden as it seems. The film we're talking about, Up, can be thought of as both their last good and first mediocre film. To explain what I mean, I must lay out the 3 basic things that made peak Pixar films so special:

...so let me examine how Up fares in those three aspects.

1) It knocks it out of the park. Up is one of the best-looking computer-animated movies of all time. I'd definitely put it in the top 5. It was directed by Pete Docter, who also directed one of my favourite Pixar movies, Monsters Inc, and his geometric, brightly-coloured art style is on full display here. Roger Ebert compared it to Miyazaki, and I think that's a good comparison. The characters are cute and the environments warm, but not overbearingly so. Each design tells you a lot about the character's personality, in a way that feels so natural you don't even notice it. I love the animation on the bird, and Paradise Falls is beautifully rendered, with sights of the clouds hovering above the jungle. Overall, Up is a visual treat.

2) It works well enough. The opening montage depicting Carl and Ellie's married life has become legendary, and for good reason. It's touching, elegantly told, and backed by an excellent score. It also sets up Carl as a vulnerable character, and the house as a symbol of his attachment to Ellie. I love all the parts about them, how the gradual construction and disassemblement of the house is used as a storytelling device, and how even in death, she continues to be his emotional crutch. It's all so ''Pixar''. The other parts, though, not so much. They try to get some pathos out of Russel and how he comes from a dysfunctional family, and Charles Muntz and how all these years in the wilderness have made him into a lunatic, but it all feels tacked on.

3) This is where it drops the ball. Up is the first Pixar movie to, even for a second, feel pandering and childish. I'm not talking about the dialogue - it is still capable of getting its point across organically - I'm talking about the humour. There's a scene which perfectly embodies the comedy of Up: Charles Muntz takes in Carl and Russel as guests, they all sit down at the dinner table, Charles comments what a treat it is to have guests over after all this time, to which all his dogs start jumping up and down yelling ''Treat! Treat! Treat!'', which makes Charles groan and rephrase ''treat'' to ''delight''. This isn't just an isolated incident, almost all the jokes rely on the ''annoying idiot'' formula driven into cliche by all the Spongebob knockoffs of the time. To call back to Monsters Inc, it did have what you might call ''kid jokes'', but they weren't just clever, they were always there to maintain the pace of the story, never to interrupt it. A joke in Monsters Inc is like another chord in a song, while a joke in Up is like an unskippable ad. You can't help but to get that sinking feeling, like you're witnessing the Pixar that made Toy Story transition into the Pixar that made Toy Story 4.

To be clear, I still recommend Up. Half of it is up to peak Pixar standards, and that's more than enough, just don't go in expecting to be knocked out of your socks.