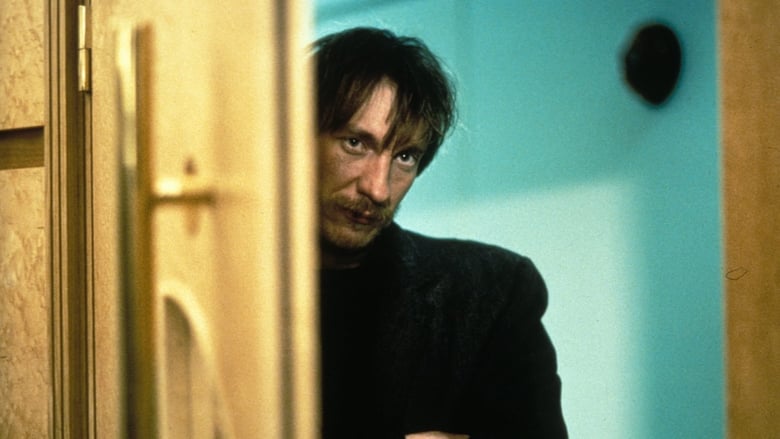 
For all the adjectives typically thrown at Naked -- "bleak," "unpleasant," various other synonyms that describe the film's seedy nature -- rarely do I see "hilarious" used as a descriptor, yet the humor is what stood out to me the most on this first viewing. I might not care to spend much time with Johnny in the real world, but with a screen to serve as a barrier like glass at a zoo, he makes for a fascinating, entertaining animal of a human being. Loquacious, well-read, philosophical, gifted with a sharp intellect and acerbic wit, yet appearing as if he was birthed in a gutter and nourished on the teat of a homeless woman. He's an enigma hiding behind an unkempt mustache, hopping from street corners to couches depending on the charity of others, a bag of books slung over his shoulder because he has no bookcase on which to place them. I turned on subtitles partly because of the strong accents, but mostly so I wouldn't miss any of the brilliant dialogue from laughing at Johnny's lengthy tirades and sardonic quips. I'm amazed to read that much of the script was improvised. David Thewlis is brilliant as Johnny, delivering one of the most memorable performances of the Nineties. Rarely have I seen an actor dive so deeply and convincingly into the mindset of a character.

In the very first scene we witness possible sexual assault. I hesitate to call it rape since such a violent act doesn't fit with the character we come to know. Sexual liaisons with Johnny quickly turn rough, as he seeks to mentally and physically dominate his partners, but his sexual encounters throughout the rest of the film are consensual. (If not for Johnny's ability to opportunistically switch on the charm, I'd call bulls**t that such a haggard individual meets multiple women willing to open their legs for him, despite the fact that he reeks of mildew, sweat and urine, his hair and coat a likely omnibus for fleas.) However, since we join that opening scene in progress devoid of context, audiences can only assume the worst. For viewers reliant on likable characters, this introduction confronts them with an immediate ultimatum: Prepare yourself for an unsavory ride or hop off now.

Johnny is not a good person. He's lazy; he's lecherous; he's a thief; he abuses charity; he views everyone around him with contempt; he openly derides anyone who ventures within his stratosphere. And yet I find him strangely sympathetic. Part of that might be his aforementioned wit and charm. Part of it might be the juxtaposition of the "Landlord," a truly despicable, monstrous human being who makes Johnny appear saintly in comparison. Much of it is likely Johnny's self-inflicted impoverishment. Here is a man capable of great accomplishments based purely on his enormous intellect, yet he so loathes humanity and himself that he willingly pisses away all ambitions to drift aimlessly through life while leeching off others. Some have speculated that Johnny is terminally ill due to his chronic cough. That's irrelevant, since mankind itself is terminally ill in Johnny's eyes. The end is nigh, and while the rest of society scurries on top of each other like nescient vermin, Johnny will ring in the apocalypse with a smoke and a sneer.