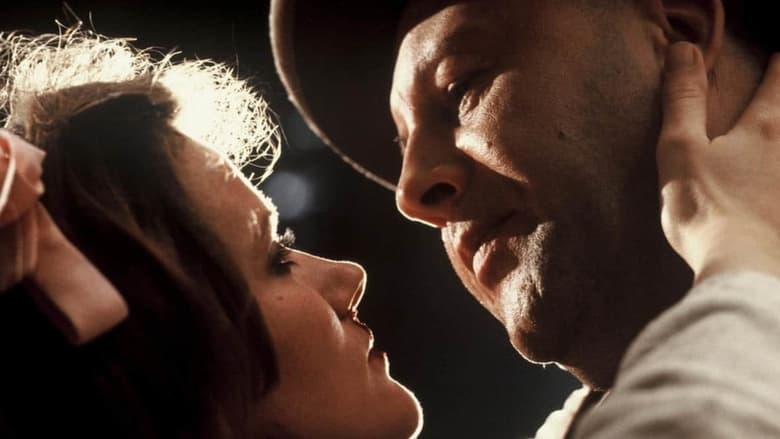 Having watched the first six episodes twice, I can now see the true genius of what Fassbinder has done. He adapted Alfred Döblin's novel, directed and narrated, but it took me a second viewing to actually realize that each individual episode is told in a different style and from a different perspective. From what I've seen so far, I'd say that Fassbinder made the first six (out of 14) all individual films, all about one character, Franz Biberkopf (the incredible Günter Lamprecht), the man who gets out of prison in 1928 after serving four years for manslaughter and finds Berlin and Germany in the midst of a horrible depression and a subtle political uprising. The miraculous thing is that each new episode picks up exactly where the previous one left off, in the middle of the very same scene.

The richness of the myriad characters is matched by two key contributors. Peer Raben's musical score is used wall-to-wall in this film. There is a haunting theme, often played on harmonica, but sometimes the music is very avant-garde and creates a sense of dread or anxiety in the viewer. I'm seriously telling you that I've watched six-and-one-half hours of film and I've heard six-and-one-half hours of music, and damn fine music at that. The other major contributor is cinematographer Xaver Schwarzenberger who liberally use filters and flashing lights at times, but shoots totally naturalistically at others. Apparently, Schwarzenberger took over for Fassbinder's regular DP Michael Ballhaus when Ballhaus quit because Fassbinder was giving him the cold shoulder and not even talking to him anymore (allegedly for working with a different director). Although it would be interesting to see what Ballhaus would have done, what's on the screen is eye-catching.

The film certainly qualifies as a masterpiece in many regards. First off, even though it's certainly a melodrama, it is extremely subtle in how it ties together what happens in it to what happened in what became Nazi Germany. I can only recall the Nazis in one of the 13 episodes (Episode 2), but the way Fassbinder builds the film (probably due to the novel itself) into an exploration of how the Depression, and the general amorality of a defeated country needing to prop itself up in any way that it can, explains why Germany would find solace and salvation in a few short years in someone who supports the notion of "Us Against the World" and that it's OK to kill women and weaker people if it allows "Men to do what they do". 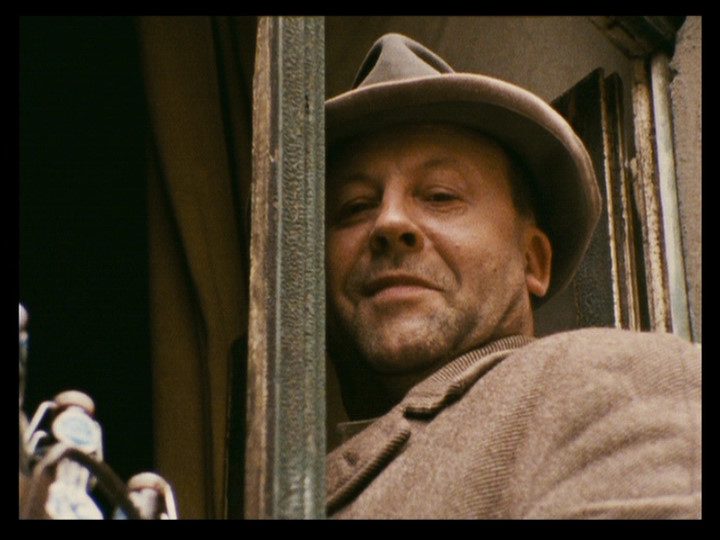 Franz Biberkopf (Günter Lamprecht) is truly one of the most complex characters in cinema. He loves women, yet commits brutality to them when not thinking. He understands the idiosyncrocies of politics, yet cannot fathom his own heart. He laughs when he reads about a family murdered by the father, but cries when he feels someone betrays him in matters of the heart. On the other hand, he'll protect a scumbag who causes him to become deformed and won't tell the story to all those who love him and could possibly be saved in the future from said scumbag.

The scumbag in question is the pathetic Reinhold (Gottfried John), another candidate for most complex character ever. In fact, there is a symbiosis between Franz and Reinhold which makes the film far more tragic, but adds to its power as a cautionary tale about the rise of Naziism. Reinhold seems to have to change women every few months and he gets Franz to "take them off his hands". Franz is very friendly and loving and agrees at first, never really understanding how emotionally immature Reinhold is. But, then again, Franz is terribly immature too, and this all folds in upon itself as the film implies that atrocities are accomplished by emotionally-immature men who feel they have a right to inflict their own desires on those "weaker" than themselves.

By far, the brightest part of the film is the angelic presence of Mieze (Barbara Sukowa) who comes to love and worship Franz. The character of Mieze allows the possibility of redemption to all the characters, and in fact, the entire nation of Germany, but her sweetness and beauty aren't allowed to overcome "the way things are". I have to first explain that Mieze is already a streetwalker before she even meets Franz, but she retains an innocence and, yes, purity, which is undeniable to all who see her. She immediately falls madly in love with Franz, and the audience falls in love with her. Peer Raben's music, which has already given Franz one of the greatest character themes in film history, gives Mieze one of the prettiest themes I've ever heard. I basically cry every time I hear her theme and see the wide-eyed love which Barbara Sukowa conveys. The fact that she becomes the ultimate conflict and tragedy present in the film only adds to its power.

One other thing I want to share about Fassbinder is that I believe he was a kindred spirit to John Cassavetes. They both worked at approximately the same time, and they both made highly personal films with naked emotions and extremely long takes. I couldn't actually time them all, but I wouldn't be surprised if there weren't at least a dozen scenes in Berlin Alexanderplatz which lasted at least 10 minutes, and if they all didn't, it's only because of a very brief edit. The actors obviously had to be prepared to film such scenes, along with the cinematographers.

I can't wait to watch the epilogue. From what I understand, it's totally bananas stuff inside Franz's head and something along the lines of the Book of Revelation. At the end of Episode 13, Franz is laughing like a Madman, and I feel sorry for him, but since he is an "innocent" who represents how Germany turned towards Naziism, I can only imagine what his sorry mind can hallucinate. I've heard different reactions about this epilogue. I just hope it blows my mind and still has something pertinent to say about the actual story, characters and meaning of Berlin Alexanderplatz

I'm mostly concentrating on the two-hour epilogue here. I will admit that even taken in the context of the previous 13 1/2 hours, the epilogue is disappointing, and I can't give it any more than , which may be generous. It just seems more pretentious and intentionally over-the-top than the film proper, which doesn't overly concern itself with symbolism and surrealism. It also seems far too long for what it's trying to convey, so it suffers from overkill by rubbing the viewer's nose in some things which were better left implied in the first 13 episodes. I mean, when Franz is being crucified, and his mother Mary (Brigitte Mira, Franz's landlady) is holding a doll of Baby Franz wearing a swastika, and then an atomic bomb goes off in the background, it's a strange combo of bravura filmmaking and incredible vulgarity. 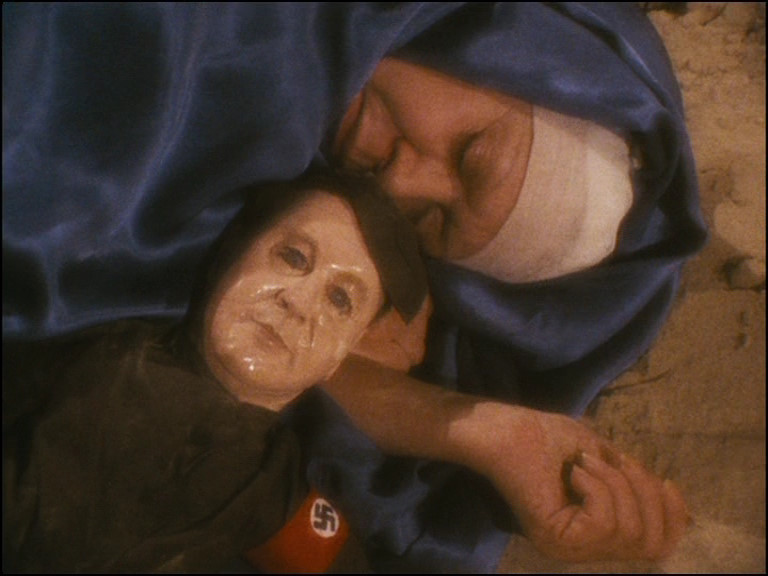 There is still much to be impressed about in this epilogue. At the end of the 13th episode, Franz was on the verge of a nervous breakdown, and the gist of this epilogue is that Franz is taken to a mental hospital and appears to have dreams involving all the characters from the earlier part of the film. There are also two Angels (Helmut Griem and Margit Carstensen) who are following Franz around, discussing whether he is worth saving, considering his ordinariness. The first 15 minutes of the epilogue are very stylish with dead and living characters interacting with Franz in a Twilight Zone version of Alexanderplatz. The camerawork, staging and art direction are all quite striking here. There is also an original use of a spinning camera projected onto a background in a boxing ring during a later scene involving a fight between Franz and Reinhold which should not only have your head spinning, but maybe your mind being blown. The middle part of the epilogue is where the brutality and sex seem to take over and result in scenes which go on far after their potency has ceased. However, it's also in this part that Fassbinder does introduce anachronistic use of modern music, and I believe that this does work. Along with appropriate period music and some older classical and opera pieces, you will hear songs by the Velvet Underground, Elvis Presley, Kraftwerk, Janis Joplin, Donovan, Leonard Cohen and Dean Martin.

Overall, the epilogue cannot dilute the power of the first 13 episodes, plus there are enough scenes which actually add to its meaning that I can take the overblown stuff. For every scene set in a slaughterhouse with humans as the slaughtered, there is a thoughtful scene such as the one where Reinhold explains his relationships with women to his prison cellmate. Reinhold has formed a deep love for this man and cannot understand his feelings although he certainly acts on them. When Reinhold says that he'll be lost when the man is released in two days, it's just about the first time that he reveals any warmth or love for anyone in the entire movie, and it definitely adds to the already complex nature of his character.