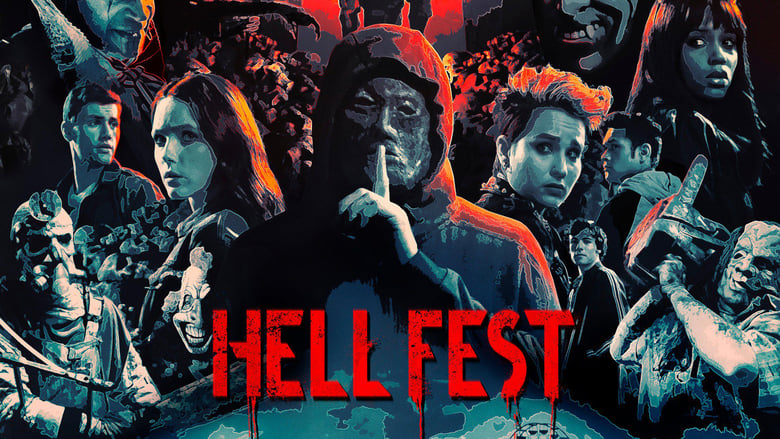 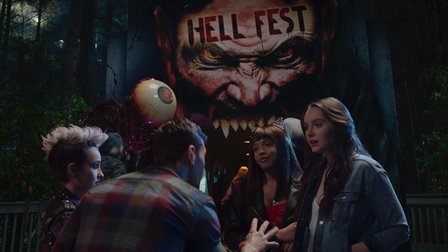 A group of friends attend a horror-themed amusement park on Halloween only to be stalked by an actual masked killer.

I'm not sure how many horror movies I've seen that take place on the grounds of amusement parks (whether of the "haunted house" variety or not), but I don't think it was enough that I expected any clichés specifically related to the setting. However, for all the lurid colours and grotesque setpieces that the eponymous festival foists upon its customers, Hell Fest can't help but play like a decidedly standard excuse for a slasher. The ambiguity of being unsure what's a real threat or just part of the show is fairly constant, though maybe too constant as the park's staff seem to jump out at our lead characters every few seconds. The same goes for the linear progression through the festival as they are made to descend further into increasingly hellish mazes and rides, though even those struggle to come up with much variation after a while (but hey, gotta dig that funky lighting). Actual moments of horror tend to be few and far between as there's the odd moment of tension but only two truly noteworthy kills, so it's fairly disappointing on that front. There's not much else to be said for the killer's prospective targets either with seemingly all of their characterisation being centred around how horned-up they are for a) each other and b) setting up the final girl with a date. However many amusement park horrors I have (or haven't) seen doesn't seem to make much difference to how much I enjoyed (or didn't enjoy) Hell Fest, which wastes a significant amount of its potential and just proves a vaguely enjoyable slasher throwback that at least gives you a nice-looking haunted house vibe even without any of the associated fear.