by mattiasflgrtll6
posted on 9/06/19
in
Man Trouble 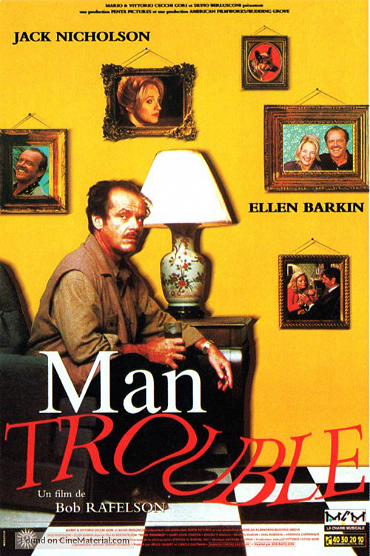 Harry Bliss isn't at the top of his game. He's stuck in an unhappy marriage where the arguing never seems to end and he's got his ass up in debt. He seems to find some meaning when he gives one of his clients a dog to protect her home and forms a connection, but things start to go awry when someone blackmails him into stealing a manuscript from her friend.

Man Trouble is a weird beast of a production. There are all the right ingredients to make something good. You've got a talented director (Bob Rafelson), an excellent cast (Jack Nicholson, Ellen Barkin, Beverly D'Angelo, Michael McKean, Harry Dean Stanton, Veronica Cartwright, Lauren Tom) and a good screenwriter (Carole Eastman)... and yet somehow, it doesn't quite work.

It's not all bad. Jack Nicholson is enjoyable in the main role of Harry, playing him with his usual natural charisma, where even when the script is not the best he makes the most of it. Ellen Barkin is decent as Joan Spruance (until the third act, which I'll get to later). She doesn't have the same lustful aura of Sea Of Love, but gives her character enough credibility you buy into the romance between her and Harry. She's best in the quieter scenes where Joan and Harry get to know each other and share some interests and details from their lives.

There are some amusing lines and moments here and there. Nothing laugh-out-loud funny, but Nicholson's affable dry wit (particularly in the marriage counsel scenes with him and Adele, amusingly portrayed by Lauren Tom), some slightly absurd moments and most of all, the cameo from Harry Dean Stanton provide some smiles and chuckles. Even Barkin gets a few in.

The animated opening sequence is cool.


The first problem with this movie is that it has no idea what it wants to be. Is it a romantic comedy or a thriller? It goes back and forth between the two all the time, undecided what to settle on. The tone shift in the third act is so inconsistent with what came before that it's jarring. If you want to inject some suspense into your romantic comedy you have to set it up much earlier. Even though you see Harry get blackmailed, it doesn't become a major plotpoint until much later on. You do hear about someone breaking into Joan's house, but it's treated too lightly to make you fearful for her life (with the exception of the break-in at the garage, which I admit actually rattled me a bit).
And although there is humor, it becomes more infrequent as it goes on. Harry Dean Stanton's cameo when he showed up was such a relief since I finally got something to chuckle at again.

I brought up earlier how for the first two acts, Ellen Barkin is decent. In the third however, she's... honestly pretty awful. She screams at the top of her lungs and seems like she's mad at the director for not giving her something better to work with rather than Nicholson's character himself. Veronica Cartwright is sadly also bad in her small role as Helen Dextra. In one scene she's just flailing her arms around and sounds like she's coughing up a hairball.

The aforementioned suspense which comes into full force in the third act is not very suspenseful. Instead it's very boring and halfbaked, with only Stanton lightning up the mood a little.

It's an okay watch if you're a fan of Jack Nicholson. It's definitely not the carcrashing disaster reviews make it out to be, but set your expectations low.