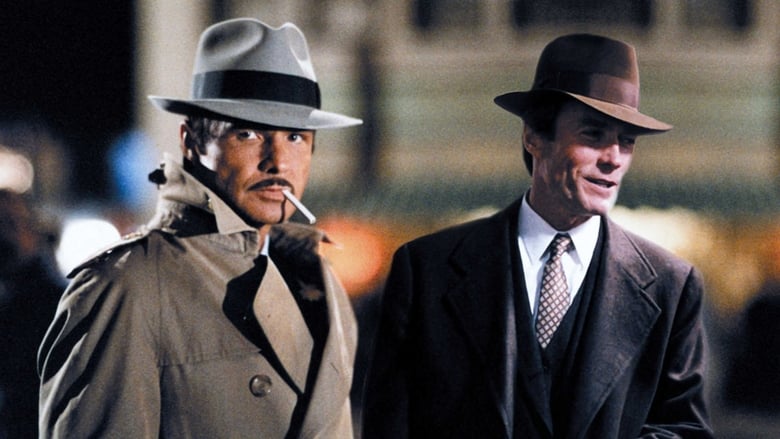 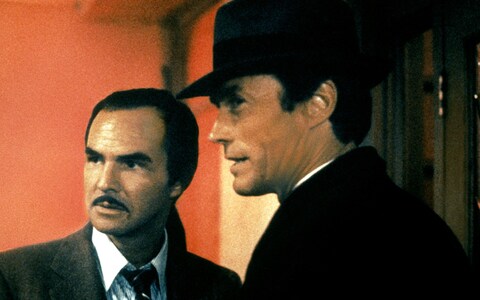 Mike Murphy's partner Dehl Swift tries to blackmail a mobster with his secret accounting records... with unfortunate consequences. A rival gang goes after the missing records, so Murphy has to team up with his old partner Lieutenant Speer to fight both gangs before it erupts into one giant mob war.

Before I start talking about what I thought, let me just get this straight: I love Clint Eastwood. I will see just about anything he does, no matter what it is. In every movie I've seen him, he commands the screen, whether it be an emotional role like Honkytonk Man or the gritty Dirty Harry. And Burt Reynolds, although I haven't actually seen him in that much, he always makes a great impression on me. Switching Channels is a clever and underrated news satire, and who can forget the remarkably tragic Deliverance?

So naturally I looked forward to seeing them paired together. After all, the odd pairing of Eastwood and Charlie Sheen worked surprisingly well in The Rookie.

Now... This is not a bad movie. At times there are lines which make me chuckle, and I really like the old-fashioned 1930's setting, with the nice-looking cars, the classy clothes and fancy jazz clubs.
Clint also seems to have a lot of fun. He never takes himself too seriously, and his deadpan delivery and subtle facial expressions makes even the silliest one-liners work (for the most part). Burt is more uneven, but his classic charm definitely shows in some scenes, and works as a good companion piece to his more straightfaced screen partner.
I liked Jane Alexander as the secretary and love interest Addy. She has a cockiness to her character that's not too obvious, and serves as the voice of reason when Mike and Speers get a bit too crazy.
Richard Roundtree as the con man Dehl is sadly not there for that long, but he's good for the small time he gets.
Rip Torn similiarly doesn't get nearly enough screentime, but is a joy to watch as the villain Primo Pritt.

The jazzy soundtrack featured occasionally is nice to listen to, most notably the title track City Heat.

Those who've heard about the movie might know about the scene where Reynolds' character fends off crooks dressed in a Big Bad Wolf costume. And yes, it's just as gloriously ridiculous as it sounds. I'm not really sure what the thought process behind that was, but all that matters is it made me laugh.

Unfortunately, City Heat stumbles over itself so often that it never really quite comes together. The opening scene with our two main characters at a diner was very promising. Speers is just trying his best to enjoy his coffee as two mobsters are looking for a guy named Mike Murphy, who enters only minutes later. Seeing Mike fight for his life with Speers not giving a shít at all until someone spills his coffee made me snicker, and I couldn't wait to see what else the two of them would be up to.
But it doesn't take long before something starts to feel off. Initially I can't quite figure out why, but I struggle feeling engaged in any scenes playing out. Then I realize it's the dialogue that's at fault. Usually if a movie contains great actors, you can forgive some of the more glaring script flaws, but some of the lines that come out of the characters' mouths just doesn't feel believable, at times even kinda embarrassing. Why does Mike have to say "snotball" so much? Come to think of it, the insults in general are just weirdly placed. Really, "ape face"? That's the best you could think of?
I mentioned before I thought Burt was uneven. In some sections he's good while other times he doesn't look very comfortable, especially with some of the more questionable lines he has to deliver.

The characterization is the biggest problem. We're supposed to believe two things. First that Mike and Speers have known each other for years. Secondly that they used to be best friends, but now are worst enemies. It never gets explained why exactly they hate each other, not even with the simplest most basic explanation. Not to mention if you thought Clint and Burt would share a lot of screentime, you're sadly mistaken. At most they probably share half an hour, which gives the movie nowhere near enough time to develop a real relationship between the two. It's a shame, since the actors have a good repertoire when they share a scene together. There simply isn't enough of it.

The one weak link in the cast is Madeline Kahn. If I didn't know she was an experienced comedic actor I'd mistake her for an awkward first-timer. She was pretty bad.

There are enough memorable moments to stay until the end, but disappointing by the genre's standards.