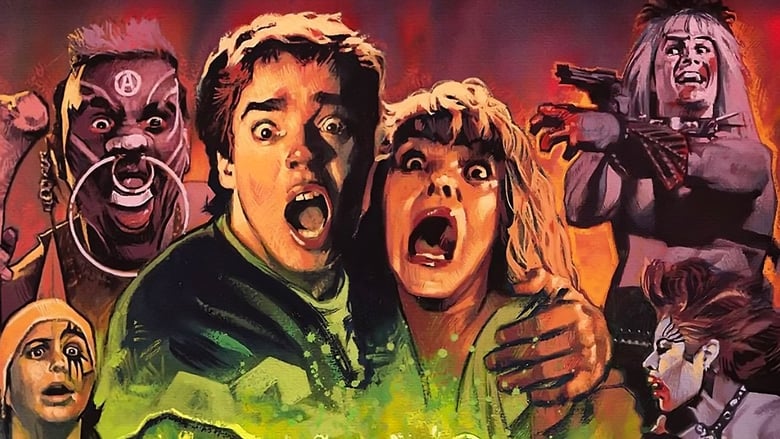 by mattiasflgrtll6
posted on 3/30/19
in
THIS REVIEW CONTAINS SPOILERS THROUGHOUT. 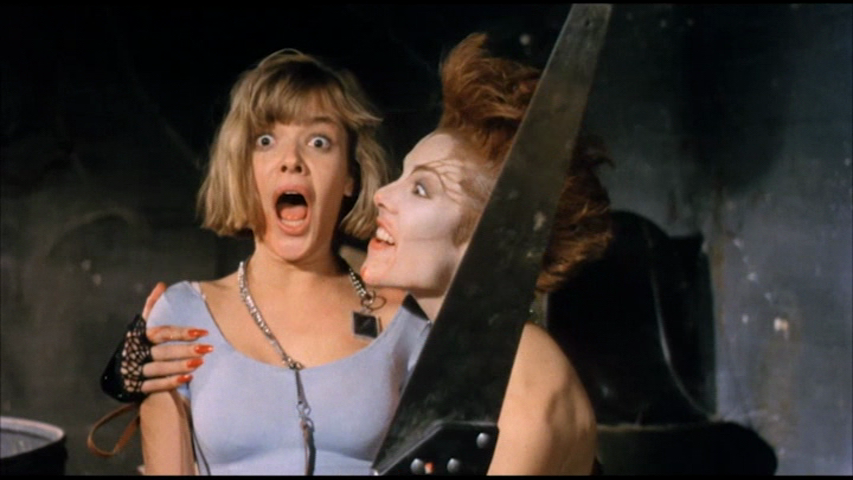 Tromaville's high school is a messy one. Most of the students only give a damn about smoking weed, fooling around and generally causing mayhem. And none are worse than The Cretins. But things get even nuttier when a nuclear power plant nearby starts leaking radioactive waste, which makes it into the schoolgrounds.

The film's opening scene is very welldone. You get a shot of the power plant, and how due to a pipe leakage, the nuclear waste seeps out. Then we cut to the high school. It's the usual stuff, a nard gets picked on by bullies in the bathroom. He washes himself and notices the water is green. He gets mildly disgusted, but other than that doesn't think much of it. Already now it's evident he's doomed. As the first lesson of the day starts, we see a classroom right out of hell. The teacher berates the unruly students and states that the only one who cares about learning anything at all is Dewy. We see him smile when he gets the compliment, but that smile turns to fear as he suddenly starts to twitch and make weird sounds. And before you know it, starts vomiting up green goo and have his face melt! It's an impressive demonstration of the wonders you can achieve with practical effects, especially when keeping in mind how low the budget was. This movie's no Raiders Of The Lost Ark, yet the melting face is just as convincing here.

After that the catchy title song Nuke 'Em High plays, which gives off a really fun vibe and sets the tone for a zany gorefest. And just like the thing as a whole, it's unabashedly 80's.
The main characters are the couple Chrissy and Warren. Unlike the rest of the school, they take their studies seriously, and are even shown to be fans of classic film. They discuss going to the Fellini festival). And as a result, also end up becoming the most likable characters. But due to group pressure, they're forced to smoke a joint. And just any joint, but a ”nuclear high”, made up of radioactive waste! You expect them to turn into mutants, but instead they become really horny and have sex. Believe it or not though, this scene is actually important to the plot. I like the look on Warren's taunting friends' faces when they talk about how there's no way in hell he's losing her virginity to Chrissy, only to discover them going at it like animals.

Gil Brenton is very over-the-top as Warren. He either delivers every line from the top of his lungs, or as awkwardly as he can. But it makes him entertaining to watch, that's for sure. Janelle Brady does a great job as Chrissy. She pulls off the charming ordinarity of her character, and plays seductive like no one else when she pines for Warren's body after smoking the toxic joint. In the scenes of terror, her facial expressions feel very genuine, yet they are kinda adorable at the same time. I don't know how to best describe it. Am I starting to crush on Janelle Brady???

And this part... this part is the most hilariously disturbing in the whole movie. They leave the party for a good night's sleep at home. Happy afte the wonderful sex they had. And they start to see all kinds of weird things. Chrissy's stomach starts growing like there's something inside waiting to come out, and Warren gets the BIGGEST boner EVER. It was so unbelievable I had to think twice about what I was seeing. ”Is that really his... oh dear God.” It's even more ****ed up with the derviously menacing grin his face makes. When they wake up after falling back asleep though, everything looks normal again (aside from the fact that they feel sick), so it gets passed off as nothing more than a hallucination.

Before I get into what happens next, let's take a look at the rest of the characters. Eddie, the most prominent of Warren's friends, pretty much goes around embarrassing himself by acting sleazy around girls, and is the one who forced him to smoke a joint. Maybe not the most charming guy, but the real monsters in the movie are The Cretins. I'm generally mixed on bully characters. Sometimes they have real depth while other times they just annoy the hell out of me. Here's the thing though: the Cretins are so ridiculously sadistic and horrible to everyone around them it becomes hilarious. One standout scene is when a poor school nerd gets ganged up on since he hasn't paid back their money. He says he can't get it that soon, but Judy aggressively grabs his dick so it almost gets crunched, so he relents and promises to get it by 12 'o clock. But it doesn't end there. He continues to gets punched and kicked in the dick and stomped on by all the Cretins. It goes on for so long I started laughing in shock at how they pointlessly harrass the guy even after he gives into their demands. My favorite performance out of them comes from Brad Dunker as Gonzo. He plays him like a real beast, grunting after every sentence and speaking with a loud, gruff voice. Appearance-wise he also stands out the most, with the various marks on his face, weird hairstyle and gigantic nosering.

And while not quite as evil, I really hated the power plant manager Mr. Minley. He's neccessary in order for the plot to progress, but god-damn he's a thickheaded, greedy moron. Instead of admitting it's their fault the nuclear waste leaked into the school no matter how obvious it is, he does nothing but lie about how everything just fine and doesn't even close the plant to prevent more nuclear waste from leaking out. Pat Ryan plays him with an effectively obnoxious dopeyness and drives home the message how big corporations care more about the money than the safety of their own customers.

The climax at the school is a joy to behold. Classrooms get completely demolished, The Cretins holler in the corridors and terrorize those still left in the building (which... are only Chrissy and Warren actually) and there are some really cool monster kill scenes.
One such involves a classically frustrating scenario where someone gets the job of checking for nuclear spillings at the school. He goes down in the cellar, but still finds zit. However, he hears a sound and constantly hesitates between turning back to check what where it comes from and returning to base. After the fourth time you're simply screaming ”Come on, dude! You've had so many shots already!”. Deep down though, we're all waiting for that wacky slasher killing. And before you can report ”One man down”, he gets dragged into a keg full of nuclear acid by one of the mutant offspring. For being a safety inspector he's incredibly stupid. Sticking your hand into that **** without gloves?

It gets very intense when Spike and Taru kidnap Chrissy and threaten to cut her těts off. Luckily he does get saved, as an image that disturbing would feel tonally out-of-place in a fun-spirited flick like this. It's very satisfying seeing these cretins (see what I did there) get there comeuppance. Especially Spike when War comes up with a remarkably creative solution. I won't spoil what it is, but once you see it you will nod your head approvingly the same way I did.
In the conclusion, most oft he students are safe, but only Warren and Chrissy seem to give a **** about the horrifying crazy events that have transpired.

Even with all the fun I had, there's something that doesn't quite add up for me. Everyone who gets exposed to the nuclear waste rather than killed right away turn into mutant murder freaks, right? Well, this seems to happen to everyone except Chrissy. Of course, a baby growing inside inside of her is still pretty damn rad (the look on her face when she vomits up a monster into the toilet says it all), but there doesn't seem to be a clear explanation to why she doesnt turn into a mutant herself.

With that aside, Class Of Nuke 'Em High is a Duke Nukem of a rollercoaster you'll want a ticket to.