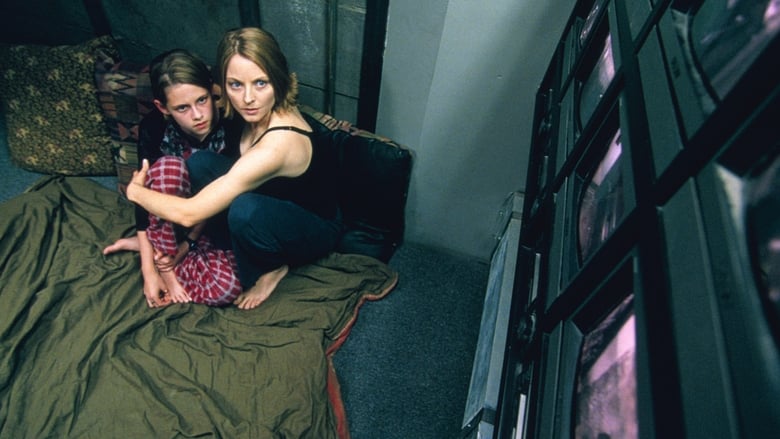 A single mom and her daughter move into a posh suburban house. On the first day at the new house they become subjects of a home invasion and robbery. The twist is they have an impenetrable panic room in the house.


It's a david fincher movie. So you know the kind of aesthetics and atmosphere that will be in the movie. Right from the title cards the movie is very much easing audience into its urban setting. Cast and crew names are displayed graphically across buildings in the city. Its a cool neat trick that works. Fincher's focuses mainly on the house for the whole movie. Pretty much from the first minute till the end of the movie it mostly takes place in the house. The advantage of doing that is to make audience feel the sense of home and a home invasion in the movie can feel immersive to the audience. The main objective of the robbers is to get stuff from a safe that is in the panic room and get out unnoticed. It has been there long before the new tenants moved in. One key mistake they make is they miscalculate when the new tenants are going to movie in. So a theft turns into a potential home invasion. In Addition to that fluid element in the plan there is also a new unpredictable member in the team who was invited to assist in the robbery by the leader.

The way to dissect this movie is to start talking about the two parties on the opposite ends of this conflict. First is the robbers. We don't get explicit background about them but we get insight into who they are by their actions and how they fit into robbery. Jared Leto is the cocky inexperienced member but since he planned the robbery, he is their self appointed leader. Forest Whitaker is the brains of the operation. He works for the security company that built the panic room in the house. Last but not least Dwight Yoakam. He is the most menacing of them all. Their dynamic is quite unique. It has shades of Breaking bad. Usually good/conflicted people resort to crimes out of desperation. But deep down these are good people. They are incapable to committing heinous crimes. But once in a while in the criminal world you find true evil and there are some people who are capable of horrible crimes and even the people who know them don't know how much they are capable of. It proves the saying that if you hand around in the wrong places long enough you will find what you are looking for. Throughout the movie we see Forest Whitaker opposing to the idea of committing any murders and just want to take the money and leave. Jared Leto to some extent is in a similar mindset. But Dwight Yoakam talks like them but he is a new level of evil and is capable of horrible crimes. So when the family locks themselves inside the panic room. His true evil progressively comes out.

The second team is the family consisting of Jodie Foster and her daughter. She is divorcee and is in mourning phase. But make no mistake , she is resourceful and strong. Throughout the movie she shows extraordinary courage and her actions feel true to her character.The movie revolves around the idea of who is in the panic room and who is outside. For most part the owners are in the room but two thirds of the way, the robbers get in there. How they get in and how they get out is the major part of the movie. The goal of the movie is to squeeze every bit of tension and thrill and scares from home invasion subgenre. The movie is unapologetic about that. The home owners are set up in such a way that they are fighters.
Every interaction with outside world is filled with thriller genre filmmaking elements. The movie is not going for any big ideas.

Speaking of how the movie is put together and the directorial style the main question would be , is it the work of an auteur or is it a well made high quality commercial movie. I would say it is a commercial movie. One of the reasons why Fincher didn't win best director for social network is because his style of filmmaking is highly stylized and heavily influenced by his music video directing background. Through his background he was able to develop a style that is designed to keep audience engaging. But the way he used this skill is to make movies about robbers, serial killers or perverted people is a bit of an easy route for a filmmaker. Every movie by him expect benjamin button is about horrible people. There is something inherently attractive to watch movies about people doing bad things so his style of filmmaking enhances that. As good as the movie is, it never feels like an uncompromising vision of a director. It feels like a well made movie that is intended to satisfy the audience and deliver on the promise of what they came to the movie theater for. So in a nutshell, the genre and type of scripts he work on makes his work easier and not the other way around. His movies are consistently good but they are good because all those movies are in his wheelhouse. Your work is cut by half if the script alone can hold audience interest. Mysteries are like that. Very easy for director to make the movie engaging. Many times in the movie I found myself noticing cliches in these kinds of movies.