by KeyserCorleone
posted on 3/10/19
in
Surprise Review!

"This is THRILLER! Thriller night!" 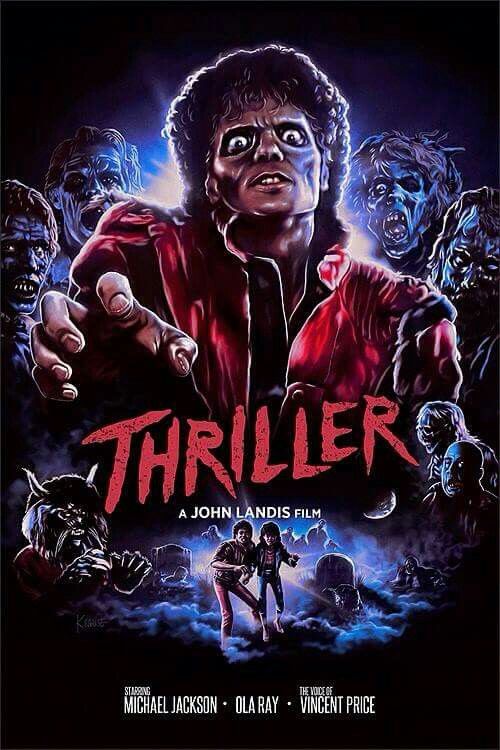 I'm a classic Michael Jackson fan. Believe it or not, I did not "grow up" with him until I was a teenager, and Michael Jackson helped me regain an appreciation for straight-up pop music in a time when pop's been done to death... no Thriller pun intended. So because of the horror marathon I recently went on, I decided to review the 13 minute music video for one of the greatest pop songs ever.

So the 13-minute music video for Michael Jackson's biggest hit tells a simple story about a couple going to see a werewolf movie. When the girl gets too scared of the film and leaves the theater, Jackson tries to show her the glory of horror movies, but end up ambushed by a zombie horde, revealing Jackson is one of them.

Of Michael Jackson's short films, this is the most entertaining because there's more room for the music and dancing as opposed to telling an actual story, which isn't the purpose of a music video. But I'm not gonna judge it for a simple horror movie story because the idea of the movie is to show off Michael Jackson and how he is evolving into more than just a cheesy pop song singer. Now he's here singing about horror movies of all things, and he can get away with it at this point. It's a shame we didn't actually get to see Vincent Price, but some of Michael Jackson's best dancing is in that movie. It takes real skill to adopt the ways in which monsters movie into a dance that doesn't feel as cheesy as the monster make-up, which had the proper cheese.

John Landis of all people directed this one so you can tell where this is going to go if your a Landis fan. He's got a lot of classic material ranging from comedies to horrors to dramas under his belt, but whatever he does you can expect clever camera placement and movement, a good level of humor, and likely something iconic. Classics like Animal House, AN American Werewolf in London and Trading Places are all worth watching but this short film puts those movies to shame in some ways. I'd like to see Eddie Murphy dance like that.

Thriller is both one of the greatest pop songs ever and one of the most worth-while music videos to watch. Michael Jackson could do anything he wanted then, and he wanted to expand his horizons and help the world in many ways. Honestly, if we're to get a Michael Jackson biopic one day, I would also like to see a feature-length adaptaion of this video, cheesy monster effects and all.