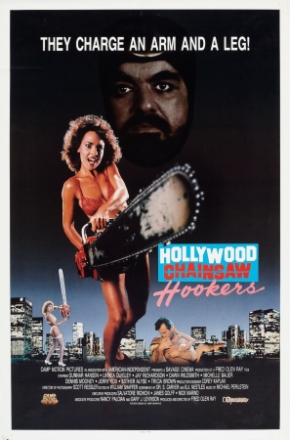 Hollywood Chainsaw Hookers opens with a disclaimer about how the chainsaws used in the picture are "real and dangerous," while also advising viewers not to try any of the stunts at home, "especially if you are naked and about to engage in strenuous sex," so it's immediately clear that the film is in on its own joke, which the hammy performances, ridiculous script and self-aware dialogue further demonstrate as the film moves along during its swift 75-minute run-time.

I wish there had been more Hollywood hookers hooking and chainsawing in place of the private dick dicking around and pretending to be Sam Spade. The few scenes of chainsaw mutilation are pretty comical, with crew members obviously standing off-screen throwing buckets of blood and fake body parts at the actresses. Every chick gets naked at some point, and since it's the late 80's, they all look like they just wandered off the set of a Motley Crue music video.

Leatherface himself, Gunnar Hansen, plays the leader of a chainsaw-worshiping cult, which is genius casting. Scream Queen Linnea Quigley also provides a bit of B-movie star power as a runaway turned stripper turned chainsaw cultist, and in the climax of the film she engages in a chainsaw cat fight, which sounds amazing in theory but is pretty lame in execution. That basically sums up the movie itself, which is only marginally entertaining in a dumb, juvenile sorta way, but never as fun as one would hope based on the title and premise. 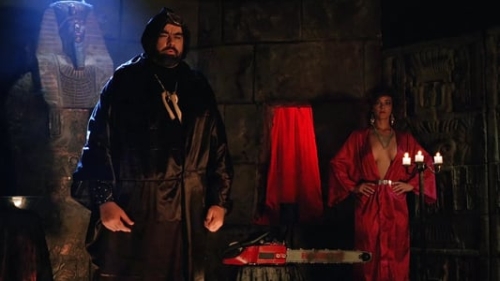 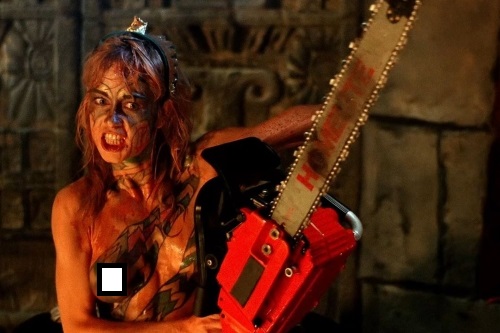