"The path of the righteous man is beset on all sides by the inequities of the selfish and the tyranny of evil men." 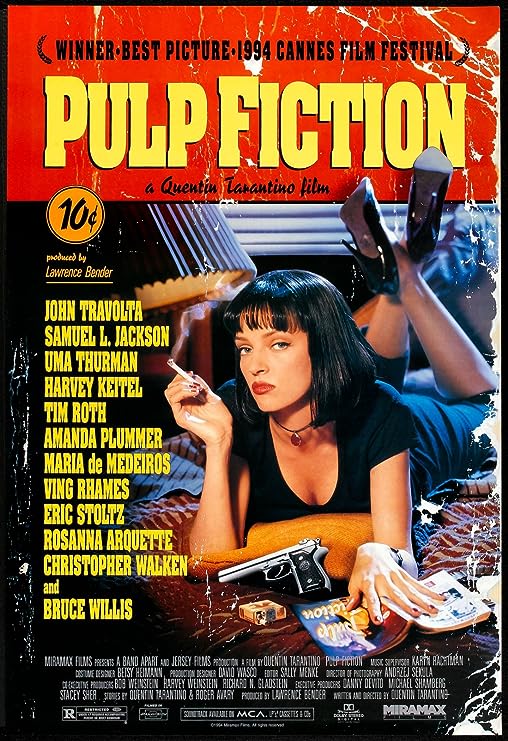 Is Pulp Fiction really one of the greatest movies of all time, and a landmark in modern cinema as well as a stepping stone for the independent industry? Or is it just seriously overhyped by people with a Rated-R fetish for sex, drugs and rock 'n' roll? There are many reasons to consider this a flop. I see criticism of this movie quite often in many common forms. But I have to disagree, because I understood the movie and its hype the first time I ever saw it. Pulp Fiction is easily one of the greatest movies of the 1990's.

Pulp Fiction is an anthology of connected stories involving a day in the lives of everyday ********. You've got (now imagine this to the theme of Gilligan's Island) the black hitman, and his best friend, the big crime boss, and his wife, the boxing man, the pumpkin and his honey bun robbing restauraaaants! Each of these people have their own story to tell, and they're only barely connected in a day in the life of crime.

No wonder there's all the criticism. The stories are all out of chronological order, starting in the middle of the whole story and ending at about the same place. The dialogue doesn't have a bunch of philosophical one-liners or anything, with the most philosophical line being a bible verse that lasts about five sentences long and may be hard to memorize. Jackson drops f-bombs like the army at the beginning of the movie, so there's that.

But there's something people are missing. There's a reason why the mocie's called "Pulp Fiction." That's not a title Tarantino pulled out of his ass, no. The movie is supposed to carry resenbliences to pulp fiction magazines. You know, adult oriented comics that handle "lurid subject matter?" They could have many different unrelated stories. If this were a movie that just had a bunch of unrelated stories, would it be any different from another anthology movie? Would it stand out? Not to mention, the cost of having to hire more and more actors who may or may not even be any good would be a problem. And if the movie was told in chronological order, it would only be worse. It's the responsibility of the audience to pick and choose certain things from each story to hold onto as you progress through the film. By this logic, the story-writing of Pulp Fiction is clever and well-placed. And it stands out from other crime movies. This was the best decision Tarantino ever made in his history as a director.

As far as other strengths go, the acting was extraordinary. This movie was a real comeback for John Travolta, who got to relive a little of his Saturday Night Fever/Grease days by having a dance with Uma Thurman. And Samuel L. Jckson never shined brighter than he did in this movie. I've seen plenty of Jackson films, and this is definitely his best role. His story, like Bruce Willis' story, is about living a morally crappy life and finding the path to redemption, probably indicating a great change in his life. The same can't be said for Vincent Vega/John Travolta. If you've seen the movie, you know what I mean. Excellent mirroring and foreshadowing, if you ask me.

Yes, there's a good deal of f-bombs in Pulp Fiction. But the truth is, some people do talk like that, and the movie isn't flooded with characters like that. It's loosely based on pulp fiction magazines, so expect a more violent and adult approach to the everyday life of a group of criminals, junkies, etc. Plus, there are a lot of quotes to take away from it just because the quotes are things you don't normally hear, and their occasionally funny. I mean, do you really think the only thing on a hitman's mind is murder? If he wants to talk about what big macs are called in Europe, I think anybody can do that.

There are tiny little flaws throughout the movie which barely mean anything if you ask me. For one, you can barely see a bullet hole before anyone shoots in that direction. And Quentin Tarantino's acting is pretty lame, but he only has five minutes of screen time, so it's not like Keanu Reeves' role in Dracula or Sofia Coppola's role in The Godfather: Part III (sorry, Francis.) This little flaws are so minor that I just don't pay attention to them.

Another one of my favorite things about Pulp Fiction is the soundtrack. Everyone who knows cinema knows that Tarantino likes to use classic radio hits in intentional lue of a soundtrack composer, so instead of using music to build up suspenseful moods, you get the realistic approach and have no music at all during these suspenseful moments. I'm a huge music fan myself, so that's something I can easily get behind.

Pulp Fiction is both treasured by the world, and misunderstood. I'm a proud member of the "treasured by the world" scene, as I am with Roots by Sepultura, another polarized piece of art. This movie is unique, unintentionally quotable, memorable, brilliantly acted, and definitely in a league of its own. And I'll add it's actually not quite as graphic as some people have let on. Kill Bill, Vol. 1 is way worse. And to be clear, just so you know I'm not one of those "the bloodier, the better" guys, you can oftentimes find me watching Aladdin just for the fun of it, because I still love kids movies. But if you're over 18 and don't let crime and what not bother you, consider checking this out sometime.