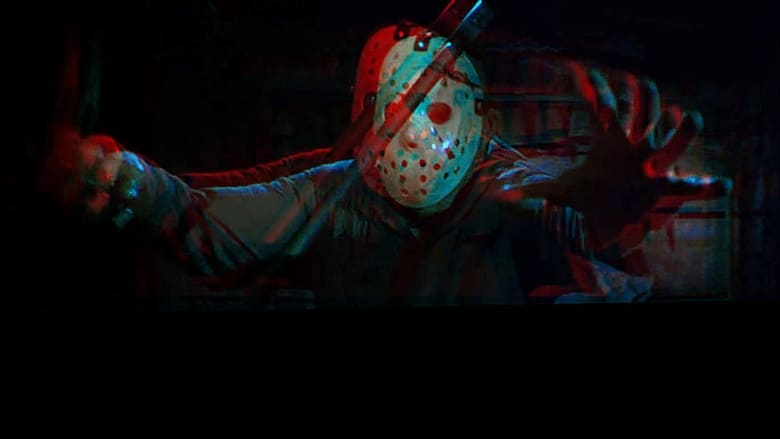 Last night I felt like being motion-and-speechless under the covers, so put on Part III. At first there was a bit of confusion as I could have sworn I just saw it, but I knew I really hadn't. And yet, I JUST SAW THAT BEGINNING!!! And not even because it was the end of Part II again!!! AGSDHJAGSH!!!AND THE OPENING TITLES LIKE...WHOAH 3D!!!! So I put on Part IV, and instantly knew that's not where I was in the marathon!!! What marathon?

So after all that excitement, I relaxed back into Part III. From the beginning.

Jason goes to the farm.

First, let me say that I'm annoyed I've never seen this in 3D. I don't care how bad the effect may be, I just feel cheated that I never got to see all those obvious 3D cues obnoxiously in my face. Also, lady getting poked by Jason. In 3D. So. Cheated.

AND THERE WAS AN EYE POPPING OUT! in 3D.

I know I say this about each part, but this one probably rivals the first for attention as my ultimate fav, even though neither has my favourite Jason kill. It DOES, however, have the superbly efficient and smooth kill (that I didn't get to experience in 3D, in case I hadn't mentioned it) he delivered right after putting on his mask for the first time!!!

, and then just dropping the spear gun casually and sauntering off, like...*mic drop*

Sadly, there's not as much swaying ass in Part III, but pretty sure I saw half a man butt. That'll do nicely! Some classic kills featured in this movie, my fav being either the aforementioned, or the
View Spoilers
WARNING: spoilers below
expert upside down halving of the owner of said man butt. Only just struck me now that it's ironic he got halved.

expert upside down halving of the owner of said man butt. Only just struck me now that it's ironic he got halved.

This is the only film in the franchise where I feel bummed out by Jason's "death" in the end. I don't like seeing him covered with a sheet, like a regular dead guy. He's special.

Technically, I can have both this and the first as my favs as the first wasn't a Jason movie, whereas this one is. This one blatantly ties in with the first at the end in what can be seen as a "rip off" ending, but I prefer to see it as a neat cycle.