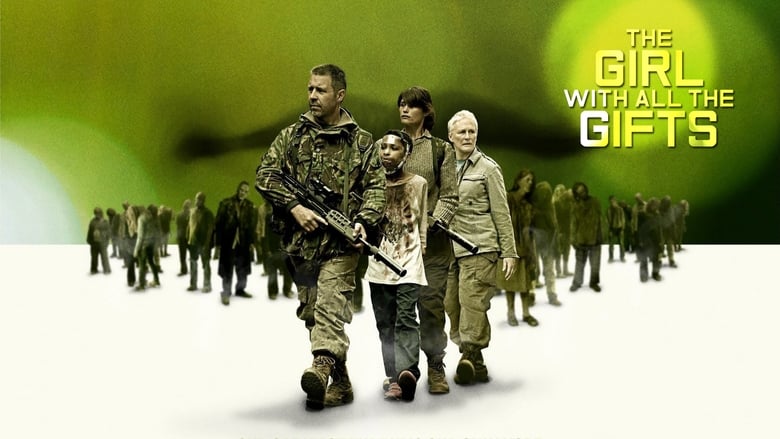 The Girl with All the Gifts

Truly exceptional zombie (or zombie-like, if you prefer) movie, with good characters and depth instead of a an all-out munch fest, which I don't mind either. This one is set after the decimation of most of civilization from a fungal plague, where we see mostly military survivors at a fenced-in camp. Unusual from what you might expect at an army camp, there are several dozen child survivors who are infected with the fungus and given the chance, will attack and kill remaining humans. The difference between the children and the giant hordes of flesh-eating "Hungries" is that they retain the human ability to think and learn. That is, as long as the humans keeping charge of them keep a lotion rubbed into their own skin that blocks the human smell. Without it, the children will start going into a fit, trying to bite their keepers. And make no mistake, the kids are being kept prisoners, wakened rudely each morning by their military guards who keep them strapped into wheelchairs to roll them into a class. Here, they are treated humanely by Helen (Gemma Arterton), who not only teaches them but tells them stories, which they love.

The ranking soldier, Sgt. Parks (Paddy Considine), is very rough and rightfully fearful of the children, referring to each one as an "it." He doesn't like Helen's methods but Helen disregards his rebuke and grows particularly close to a very special child, Melanie (Sennia Nanua), who seems to learn and evolve faster than the other children. Outside the camp, thousands of Hungries keep gathering until they eventually break in, leading Helen, Parks, Melanie, another soldier, Kieran (Fisayo Akinade), and the leading army scientist, Dr. Caldwell (Glenn Close) to all escape, first by military vehicle, then by foot. They make their way to London, where Melanie leads them through the dormant Hungries, who only come awake when they hear noise or smell anything not covered by the odor blocker. This is really where the movie hits high gear, as the survivors have to literally tiptoe through thousands of motionless flesh-eaters, trying to find food and shelter. Melanie is not threatened by the Hungries, as the children are part zombie themselves.

This movie really does have a heart as Helen sees these second generation kids as something more than zombies. Dr. Caldwell understands that Melanie is the smartest and wants to cut her up to work upon a hoped-for vaccine against the plague. Helen protects Melanie against Caldwell, whom she knows will eviscerate Melanie at the first chance, even as they are on the run. The rest of the survivors begin to trust Melanie as she volunteers to go on solo missions to find food, shelter, anything that will aid them in staying alive. If she munches on a stray cat on her errands, oh well, kid's gotta eat. She does so to suppress her need to eat humans. She begins to bond with all of them, except of course Caldwell. There are very tense moments as the group explores a mostly deserted London. Caldwell knows some secrets that she keeps close to the vest. There are other, hidden dangers in London and it really comes down to Melanie to help them make it through. The ending is particularly touching. The cast is all fine, but Sennia Nanua is a revelation as Melanie. The movie succeeds or fails on her performance and I'm happy to say it succeeds greatly.