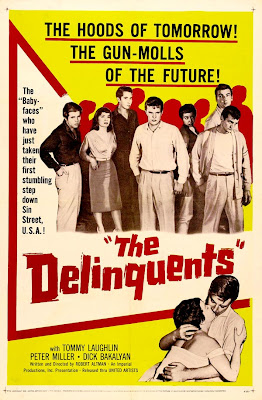 Director Altman's first feature film (he wrote the script in five days) is a foray into juvenile delinquents roaming Kansas City, Missouri, looking for people to rob and abuse. Caught in the middle of their crime spree are good teenager Scotty (Tom Laughlin) and his sweetheart Janice (Rosemary Howard). The couple's problems start when her parents decide that the kids are too serious and forbid Scotty from seeing Janice. Here is where the leaders of the delinquents, Billy (Peter Miller) and Eddy (Richard Bakalyan), make their move to make the couple's life a living hell. The film starts out with a narrated prologue which makes it sound like an Ed Wood flick, but the studio added this against Altman's wishes. In general, the film operates on a higher technical and acting level than those of Wood, and it's reasonably watchable despite the overlit interior and exterior scenes. Altman admits that nobody knew what they were doing, but this, a James Dean docu and his many shorts got him plenty of work directing TV shows for the next decade. It's also fun to see Laughlin one year before he played a naval pilot in South Pacific and a full decade before he did his first Billy Jack role
.
» More about The Delinquents
» More reviews of The Delinquents
» More reviews by mark f