Everyone loves WALL-E, the critics loved it! The fans loved it!..It won an Oscar for Best Animated Feature Film and was nominated for five other Oscars as well. WALL-E has a very high user rating of 8.4 on IMDB. But why all this love?

Myself, I was amazed at parts of the movie. I loved certain aspects of it, I enjoyed it, it was fresh (mostly) and yet there were a few things that didn't work for me...and two aspects of the movie that I out right hated.


What did I love? and hate? and what impressed me? Keep reading.


I loved the...opening scenes on a post apocalyptic Earth. An Earth that seemed to be filled with trash and remnants of some strange future society, now vanished...except for one lone robot.

I like WALL-E the robot. He was personable and charming with his childlike curiosity over the discarded junk of a dead society. He was a bit sad too. Seemingly all alone on a planet void of life. I was so glad to see his cockroach friend. Not so much so that he wouldn't be all alone, but because one lone cockroach gave a glimmer of hope that the world had not become a barren planet void of all life.
I bet you didn't think of that did ya?

World building...The movie did world building, so well! Each frame of the film was full of detail. Even in the furthest corners of each frame, I could see layers of someone's ideas that were put on the screen and yet if you blinked you'd miss them. I love the background sets of films, and this movie was richly designed. The animation was a real joy to behold.

I also loved...the way the first scenes on Earth played out like an old Charlie Chaplin film with WALL-E as the little tramp exploring his world in a Chaplinesque type of way. Gosh I wish the film had went with that idea.

Hitchcock once said that the audience is always one step ahead of the film, anticipating what they will see next. I did this too, and I was disappointed when the film didn't turn out to be WALL-E going about his daily routines and in the process discovering the mystery of what had happened to humanity. I suppose that would be too bleak for Disney, but oh well I can dream can't I. 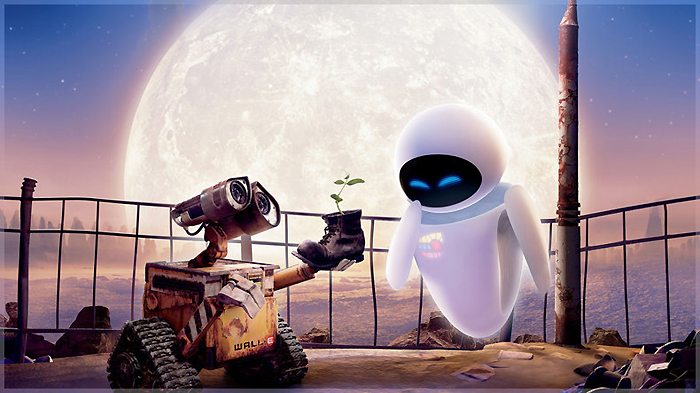 What I hated it...was Eve. I hated the way the robot looked. It had no charm and looked antiseptic and rather cheaply done. It moved like a exile for the cartoon The Power Puff Girls, which I actually like, but I sure didn't like Eve.

Even worse was the voice, which instantly took me out of the film as it sounded like an actresses voice, and not a robot. I bought into WALL-E sounding real, as he was mechanical sounding, but EVE sounded like a person duping their lines in the studio.

I really didn't care...about the romance between the two robots. That was cooked, I didn't buy it, and I didn't care in fact it was poorly done without much character building..By the time they leave Earth and head into space, I was thinking the film was a total loss.

But then it got real good!...when they got aboard the Axiom. Hot damn! Disney has some guts to do what they did with the humans. I couldn't believe they made their social commentary and satire, so blatant. I approve too! I'm talking of course about the humans who had grown grotesquely fat in the distant future after living a sedentary, self indulgent life abroad the Axiom. 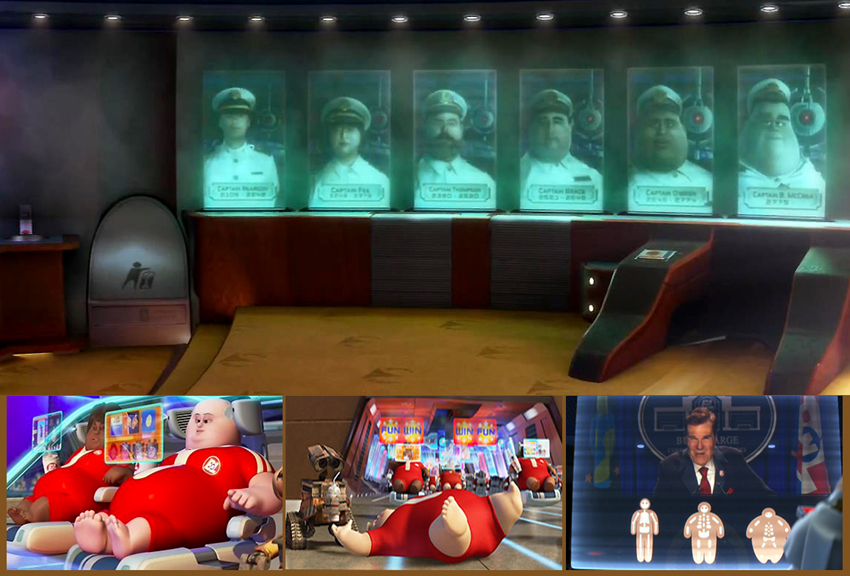 Some of my favorite scenes...Monty Python would've been proud of Disney.


Oh My God! I couldn't believe they showed these people chugging down sugary supersized drinks as they floated on their carts, because they were too fat to walk. Hey, I didn't say that, Disney did!

In one scene a portly human falls out of his cart and couldn't even get up, holly crap, that was bold of Disney! Will anybody take the social message of the film and improve their own life styles? I doubt it, but it was funny none the less.

I doubt anyone got this...but, the Axiom is not a space ship at all, it's a giant cruise ship...complete with a regenerative food buffet none the less, ha. I loved the reference to 'Gopher', I doubt the kiddies got it, but I sure did. I mean all one has to do is look at the ship and see it's a supersized cruise ship. They even had the big pool on the lido deck. So if you've ever been on a cruise you can appreciate just how priceless all that was. Loved this part of it!

But you know what I hated?...The insidious cat-walling of the two robots saying over and over again E VAAA....WALLLL E....E VAAA... Repeat that a 100 times and I got space sick. I mean I literally got a headache over the dumbnumbdaness of it.

I didn't really care about the bad robots vs the good robots...or the Captain vs the AutoPilot, nor did I care that they went back to Earth. I was actually hoping they would stay in space, cause Earth seemed better off without the Humans.