by DalekbusterScreen5
posted on 7/09/17
in
Angry Video Game Nerd: The Movie


It feels like The Angry Video Game Nerd has been around forever. Thirteen years on, it's still one of the most popular series on YouTube - even if videos are a lot less frequent currently. For the show's tenth anniversary, James Rolfe's production company Cinemassacre adapted the series into a cinematic movie, and the result is a long, long way from a success.

Gaming company Cockburn Inc have decided to release a sequel based on the infamously bad Atari game 'E.T.' (here referred to as 'Eee Tee' presumably to avoid copyright infringement), reasoning that the Angry Video Game Nerd's (James Rolfe) reviews of terrible video games has increased interest in poor quality gaming. People want to play bad games now, and Mandi (Sarah Glendening) believes a review from the Nerd will help sell copies. Meanwhile, the Angry Video Game Nerd and colleague Cooper (Jeremy Suarez) are working at the local game shop GameCops; the Nerd is fed up of his fans requesting he review the E.T. videogame, concerned that his review would lead to his fans becoming traumatised after playing the game themselves. A meeting with Mand leads him to reluctantly join her and Cooper on a trip to Alamagordo in New Mexico, the location of the buried E.T. cartridge myth that has generated much of the interest surrounding the game. The Nerd is determined to prove the myth is false, whilst Mandi believes that finding the mythological buried cartridges will spark more interest in the game's sequel, but their investigation leads to a much wider conspiracy involving the U.S. military, Area 51 and a captive extra-terrestrial.

If the plot sounds messy from that description, that's because it is. The plot takes a lot of wild turns, and a lot of the characters' motivations aren't entirely clear. I was so confused as to why Mandi, for instance, actually decides to take the Nerd and Cooper to Alamagordo to explore the E.T. cartridge myth that I had to look it up online afterwards just to complete that synopsis. Even now, I'm not entirely convinced by her so-called motivation. Why would she decide to travel with the Nerd to Alamagordo when all she needs to do is get him to play the game and say it sucks? Why would Cockburn Inc even decide to waste money financing such a pointless trip that would result in the same outcome of the Nerd giving their game a bad review? Not only that but they hire an excavation team to dig for the cartridges (even if it's a skeleton crew of three because of 'budget cuts'). If they believe a not-so-glowering endorsement from the Nerd will encourage his fans to play, then why would they need to go to the bother of digging up old game cartridges and filming the outcome?

And that's not the only thing that doesn't make sense. The U.S. military confront the group because they happen to hear them mention the words 'extra-terrestrial'. Yeah, I'm not joking. Even when the military check the back of the van and discover only video gaming equipment, they still won't leave the Nerd and co alone. What the heck is wrong with these people? Why does General Dark Onward (Stephen Mendel) and his soldiers care so much about a pair of gamers and a gaming company representative when he's got literally no reason to suspect they know anything about the central conspiracy? Does he send his men after anyone who utters the words 'extra-terrestrial'? 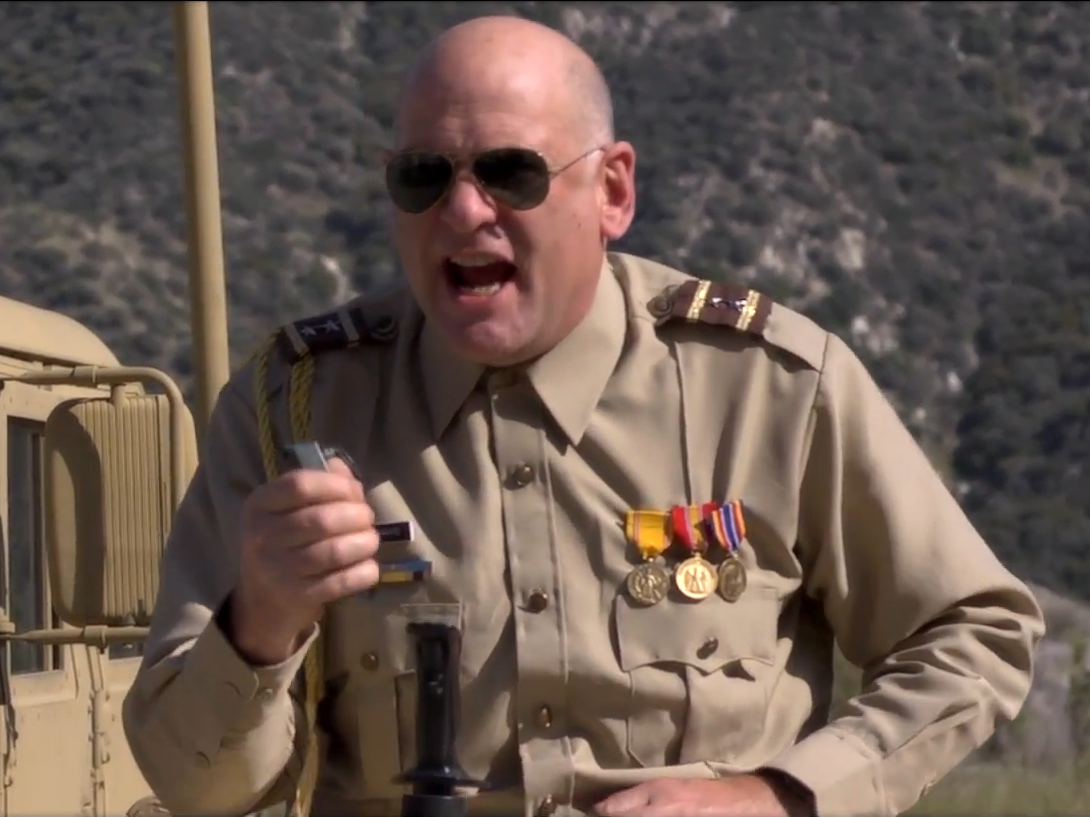 This General seems about as clueless as whoever edited the movie's opening titles. Following the scene where Mandi outlines her 'Eee Tee 2' idea, this consists of a montage of Angry Video Game Nerd reviews and fan messages and is way too long. It seems to drag on forever, and you find yourself wondering if the entire film is going to be one great big montage of Angry Video Game Nerd fans alongside clips from the show. It's also annoyingly self-congratulatory. Don't get me wrong, I enjoy the Nerd's videos but I just find this kind of back-slapping approach excruciating to watch. We get it. The YouTube series has been a big success. No need to bloat about what we already know.

None of the humour in the film is quite up to the standards of the Nerd's YouTube content. The movie largely relies on cheap gross jokes such as vomiting and blood spraying out of where the General's left arm originally was. There are also a number of cringeworthy visual gags related to penises and balls. I don't want to repeat them here as I like to keep my reviews family-friendly, but needless to say they need to be seen to be believed.

If there's one positive thing to say about Angry Video Game Nerd: The Movie, it's that the special effects are charmingly low budget. They have the same charismatic feel to them as the special effects in the classic series of Doctor Who, and it feels appropriate for a nostalgic-based movie to have old-style special effects. There's no CGI here, and it would have seemed out of place in a movie that represents a modern game as having N64-style graphics. It's the same sort of practical effects James Rolfe uses with his YouTube content.

There's some nice cameos too that will please fans of the Angry Video Game Nerd. I was particularly happy to see the Nostalgia Critic (Doug Walker) show up, and there's also a cool appearance from Kyle Justin - who sings an original song for the movie different to the AVGN theme called 'Sacred Ground of the Golden Turd'. It's nowhere near as good as the AVGN theme song, but it's at least catchy and a positive part of an otherwise poor movie. Normally I'd also mention the acting from the movie's stars in a review but there's not a great deal to discuss in that regard. They're nothing to shout about; probably the most positive thing I could say is that James Rolfe is consistent with his portrayal of the Nerd in the YouTube series.

Overall, Angry Video Game Nerd: The Movie is a poor film adaptation of the popular YouTube series with unclear character motivations and cheap jokes. The movie feels way too self-congratulatory, with too many back-slapping moments during the opening titles of the film. It's very hard to sit through and almost makes you want to chuck your laptop (or whatever you're watching it on) out of the window. If you're a fan of the AVGN though you will enjoy the cameos from stars related to the YouTube series and the special effects having a charmingly low-budget feel to them. Largely though Angry Video Game Nerd: The Movie feels like one massive cash-grab, ironically like many of the videogames the Nerd has played on his channel.