La La Land should have won the Oscar for Best Picture. It's one of the freshest ideas for a movie that I've seen in a long time...and it does everything right!

Director/Writer Damien Chazelle really gets the feeling of a classic 1940's Hollywood musical! No, this isn't a period piece, and indeed is set in modern day L.A. The style of film making and especially the visuals, are a love letter to those glamours technicolor musicals of days gone by.

Right off the bat, when I seen the old time logo: Presented in CINEMASCOPE I knew I was in for a modern-retro treat!

The opening scene on a crowded LA freeway, with the cars at a stand still, as the camera pans by them and we hear all the different types of music coming from the cars, firmly planted the film in the modern day.....Then like a 40s musical, the people exit their cars and break into song in vivid color, (a node to old Technicolor filming process)...Loved it! What great staging, and on what looked like a very real crowded freeway, how did they do that? Impressive!

I love the way they have the 'world' of La La Land decked out with icons of past movie stars and styling clues that makes the film seem like a 40s retro piece. We see this in Mia's apartment with the huge Ingrid Bergman poster and in the club that Sebastian plays piano in.

The buildings along the streets have this retro-ness look about them....Even in the way the story is constructed and in the way the dialogue flows, it's all very much styled after a traditional musical. 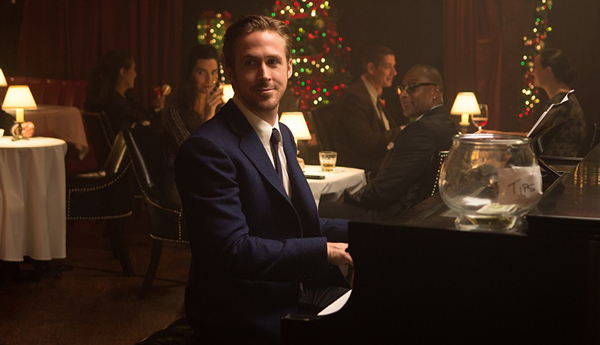 Both Mia (Emma Stone) and Sebastian (Ryan Gosling) had oodles of chemistry together. But not the touchy-feely...gee-we're-in-love type...but a more substantiated relationship, that comes from within the actors. I believed they were a matched pair and as much as they loved each other, they love their dreams more...And that my friends is what La La Land is about...'the price we pay for our dreams'.

And in that regard the film was as poignant as it was gleeful. I loved the scene when after the party they talk a long walk to their cars and have their first big dance number, such a beautiful location and choreography. The dance is simple, and yet beautiful. No wonder that scene was used for the movie's poster. My favorite part of the scene was the kicking of dirt on each other shoes!

The big dancing in the stars number at the Griffith Observatory was very fun to see, and illustrated how their newly found love, gave them wings, and they were literally walking on air.

I liked the ending best of all, I won't spoil it, but I will say it was genuine. It reminded me of another classic movie about Hollywood, A Star is Born.