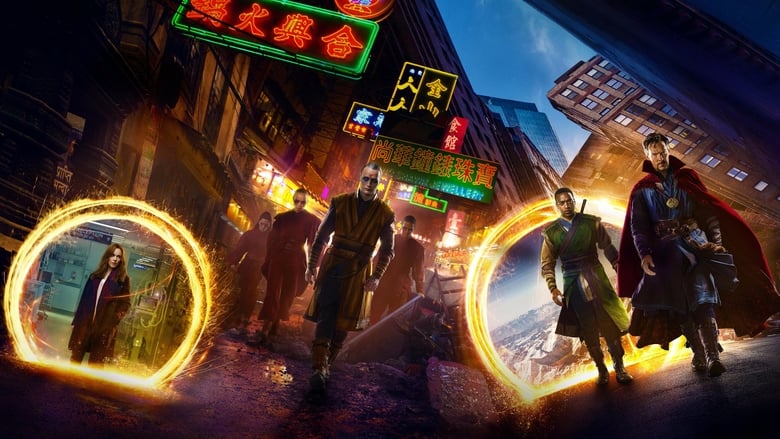 A neurosurgeon who wishes to heal his damaged hands learns of a secret society that is capable of harnessing powerful magic.

Given how much Doctor Strange is concerned with paradoxes regarding time and space, it almost seems fitting that it's the film to really hammer home how much of the Marvel Cinematic Universe is built upon a cinematic paradox. Marvel's elaborate network of inter-connecting films and TV shows have all served as building blocks for a cultural entity that is greater than the sum of its parts, yet this becomes something of a problem when it comes to assessing it one part at a time. Though Marvel obviously tries to court an audience that will return time and time again to see each new piece of the puzzle slot into place, it is understandable that they also want to draw in casual moviegoers who may have little or no interest in seeing the entire enterprise unfold and Just Want To See A Movie. This becomes especially apparent whenever Marvel produces a movie that offers something sufficiently different to their usual superhero productions - the superficial weirdness only ends up drawing closer attention to the conventional nature of the underlying framework. Outwardly unusual films like Guardians of the Galaxy and Ant-Man still depended on some rather straightforward plotting and characterisation - as a result, the measure of their success ends up being how much they succeeded at being different in spite of their underlying sameness.

This brings us to Doctor Strange, which marks the fourteenth big-screen entry in the MCU and definitely feels like it. The MCU has already had at least a couple of vehicles based around a capable yet arrogant protagonist who is humbled by personal tragedy and subsequently undertakes a journey towards heroism - this does effectively summarise the tale of the eponymous surgeon (Benedict Cumberbatch). This does result in a rather tedious first act that establishes Strange, mainly by having him trade some rather barbed dialogue with a no-nonsense colleague/ex-girlfriend (Rachel McAdams) before eventually setting off to cure his career-ending ailment. From there, he must contend with the difficulties of training under a nameless sorceress (Tilda Swinton) and an experienced mentor (Chiwetel Ejiofor). Not only does he have to overcome his stubbornly scientific worldview in order to become a master conjurer, but he must also rise to the challenge set forth by a rogue sorcerer (Mads Mikkelsen) who is carrying out a nefarious plan. The simplicity of the narrative is only reflected by how disconnected the film is from the MCU at large; save for the very occasional reference to the franchise's greater mythology, it is effectively its own film. While this does free up the film to tell its own story rather than depend on an audience's familiarity with the established canon, this also puts greater emphasis on developing a strong story and it never truly feels like it does go beyond some very basic functionality.

Of course, this simplistic approach can be considered acceptable if the movie lives up to the adjective in the title when it comes to everything else. Doctor Strange has the unenviable task of trying to distinguish itself in a manner that only seems to lean into several of Marvel's most criticised qualities. A formulaic narrative is one thing, but that can almost be considered a mere side-effect of the franchise's need to provide visual extravaganzas (especially during the action-packed third acts that can be at odds with whatever has come before). The fact that I could only find 3D screenings of Doctor Strange seems to confirm how much emphasis is being placed upon the visual side of things, though I do wonder if the 3D can just as easily work against the movie. The magic involved in Doctor Strange takes on a variety of forms - conjuring weapons, warping architecture, traveling across dimensions, and so forth - but there are times when the intricacy of these colourful creations can become overbearing and result in sequences that struggle to maintain focus on what's actually happening. It's at the point where I feel like I need to actually watch this in 2D to get a better handle on what's going on, though that doesn't necessarily make the action sequences totally unwatchable either. If anything, there are quite a few strong moments of spectacle that definitely help to distinguish it among this year's crop of superhero movies - even issues with 3D projection aren't enough to completely dilute their power.

Doctor Strange may not be the definitive Marvel movie, but it certainly embodies much of what there is to either appreciate or criticise about the studio's output. Some capable actors do what they can with material that occasionally smacks of inspiration and leads to a handful of solid interpersonal scenes but feels dry for the most part. This is especially true when the film opts to go for thematic substance that reflects its bright and twisted aesthetic (which Mikkelsen seems best at delivering as he explains his motivations) and makes for a sufficient variation on what has gone before, though its existential leanings only go so far as they do result in rare pay-offs. At the very least, Doctor Strange feels like a movie that I actually want to see again, even if it is merely to compare how well it holds up without the distracting level of flashiness provided by 3D projection. It does have some issues distinguishing itself favourably and it does have long stretches where it struggles to stay interesting, but it's got just enough strength to make it kind of work, which is about as much as you can hope for in this case.