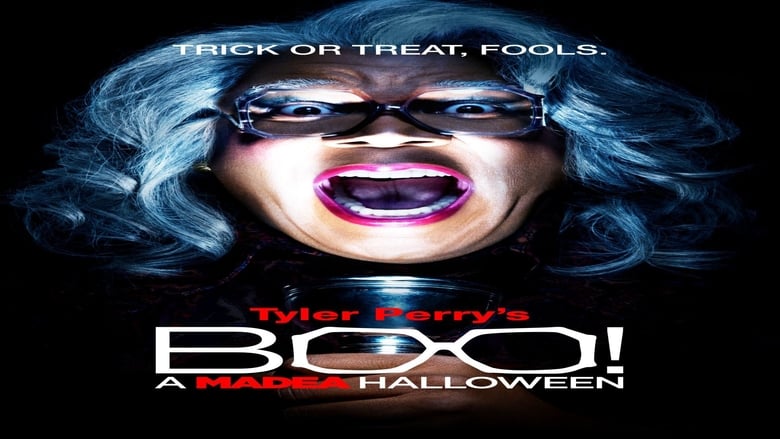 Well, here I am, back from the movies after having watched Boo! A Madea Halloween. It's opening night (even though you could have watched it last night, too.)

You might be surprised (or not surprised) to learn that I didn't exactly enjoy this 100%. In fact, I made fun of it constantly in my mind as I watched it. WHAT I COULD UNDERSTAND OF IT. 'Cause, you see, being that it's opening night at a Madea movie, all the Tyler Perry fans (aka black people) showed up in droves. There were earrings all over the floor. There I was, WHITE AS CAN BE, standing out like a ghost at a Madea Halloween movie. If Madea had been there, she would have punched me right in the face, whether I deserved it or not (some of you might say I do).

These people LAUGHED during the whole damn movie. A fat old black woman who uses two canes gets up off the damn couch -- UPROARIOUS LAUGHTER. The ceiling chips off and eventually falls down on ya. Apparently there was even a theater terrorist -- one of those shooters -- during my screening of Boo! A Madea Halloween. I never knew -- I didn't hear the gunshots. Nobody paid any attention. All eyes were on Madea.

Madea falls down a flight of stairs, you go f*cking deaf from all the laughter around you. Go in a Madea movie, come out Marlee Matlin.

When we first find Madea, she's giving out candy with - I guess it's her friend, but maybe her sister since her name is "Aunt Bam." Aunt Bam is a pot smoking fat old woman who uses two canes, and she just got her card that says she can smoke medical marijuana legally, which she proudly waves around during the movie every chance she can. She also likes to steal candy from the trick-or-treaters (for her munchies) by giving them one piece of candy, while she slips her fat hand in the pumpkin and takes out several pieces of candy already in there. A fat black boy dressed as a cow comes by and Madea calls him "chocolate milk" and he realizes what Aunt Bam has done to his candy stash, but does our moralistic Tyler Perry teach us that it's wrong to steal candy from trick-or-treaters with this scene? Absolutely not. Chocolate milk takes a hoofy hike and Aunt Bam keeps her new goodies.

A PAINFUL scene takes place in a living room soon after, with Madea, Aunt Bam, their friend (or other sister, cousin, step-mother, God knows what) Hattie, and Uncle Joe, who is Madea's equally acid-tongued brother and the only other character besides Madea that's really interesting. This scene goes on for what feels like TWENTY MINUTES (or twenty hours) and it's all about these people ENDLESSLY talking about parents and how they should beat the sh*t out of their children if they misbehave, condoning things like Madea putting her 4 year old son (at the time) on life support because she tried to spank him to death or something. Or she took the chainsaw to him, I don't remember. But the scene goes on FOREVER. It's like realism. It's like you're actually sitting with this insane black family for an entire conversation. Maybe it was supposed to be a homage to the dinner scene from Texas Chainsaw Massacre -- on and on and on. Criterion Collection will be releasing Boo! A Madea Halloween later because of the realism of the boredom you experience. It was so boring that snails walked out of the theater.

But I must say -- as bad as it was, I still had a good time. The theater experience and the audience added to the fun. I've seen a couple of other Madea movies in theaters, but the experience was never like this one, so if you want a true blue Madea movie experience, now's the time to go have one with Boo!

This movie actually started off as an idea in the Chris Rock movie, Top Five, released in 2014, which of course I never saw. As a joke, that movie featured the film Boo!, which was a Madea Halloween movie. Tyler Perry took the joke and made it reality.

Clowns pop up frequently in this movie, as well as ghostly writing on a bathroom mirror ("GET YOUR FAT ASS OUT OF MY HOUSE!"), a dog program on television having interference or something, a zombie invasion with Madea running for her life (while the audience fights for their breath back as they hyperventilate from laughing). There's a whole lotta weed smoking among the senior citizen characters -- to the point that it's like The Golden Girls having conversations NOT about sex (but definitely about almost murdering their children) while they smoke cheesecake flavored weed. Uncle Joe tries to masturbate, but gets interrupted by Madea and Friends running from a clown. And eventually, it turns out that the college frat boys were just playing pranks on Madea -- so she decides to pull a prank of her own as the final word.

Not sure what else there is to say. It's a long movie (about two hours) -- feels almost longer than that -- and it doesn't really have much going for it. I wouldn't exactly call it the definitive Halloween movie to watch every year. Ernest Scared Stupid was scarier (I can only imagine Madea punching Ernest right in the face if they had ever met).

I had a good time, I LIKED IT, but it is what it is -- a stupid Halloween movie with Madea. Didn't blow me away, but it definitely moved me at least some.