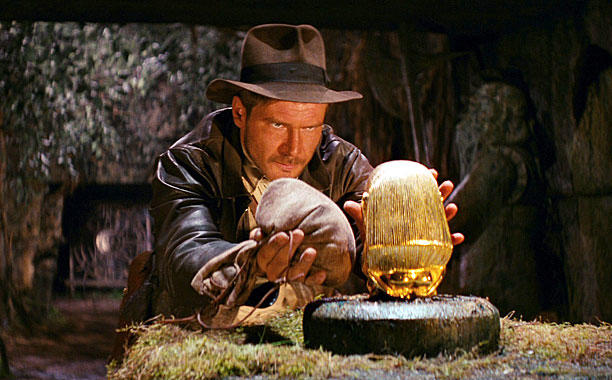 Indiana Jones and
The Raiders of the Lost Ark

Surely no pinnacle of "action", in my opinion, but "adventure"? No movie comes to mind quicker. It's reassessment time and I'm gonna go through the Indiana Jones trilogy and basically ruin them for you.

I'm gonna come right out and get the controversy out of the way: My biggest problem with all 3 of these movies are the scenes involving non-humans. I know a lot of you don't give a **** about them, don't think about it, or probably think I'm totally up my own ass about this sort of thing, but it legitimately spoils movies for me and I don't think any series suffers more from it than the Indiana Jones series.

We got Rats, Spiders, Donkeys, Horses, Monkeys, SNAKESSSSSSSSSSSSSSSSSSSSS, and you can even hear barking in one scene so there might even be Dogs in it, I dunno, what I do know is it ****in' pains me every time I see this sort of thing in a movie. You may have even noticed I make no mention of clothes or catering which undoubtedly feed into the same issue, the thing is I'm wildly desensitized to it all by this point so it bothers me in shades of opacity. It's one thing to for a villain to exploit an animal, it's another thing for that animal to be computer generated, and it's another thing for the movie to stop, refocus the camera, or even dedicate whole lines of dialog to reminding me that they beat some poor elephant in order to act a certain way.

It's by no means a necessary part of filmmaking but my escapism is ruined any time I'm glaringly reminded of how ****in' poorly humanity treats other animals and I instantly distance myself from any viewer surrogate who rides a horse off a cliff, sits down to a chicken dinner, or sets snakes aflame en masse.

THAT'S ME. That's just how I look at these things and it's how I've always looked at these things. It's something that's affected every review of mine so far any will continue to in the future. Not gonna change it, JUST SAYIN'.


That said, I certainly recognize that Raiders is a classic movie and there's no shortage to it's nostalgia in my mind. The opening itself is a memorable send up to old adventure serials in the same way that Star Wars is (perhaps George Lucas has something to do with it?) and while you could easily pick at it for it's cheese (who designed these complicated death traps anyway?), you'd be firmly missing the point of the material.

I myself have a fondness for Dungeons & Dragons (I know, I must be winning so many fans today) so a movie all about hunting down ancient powerful relics across different lands and fighting a rival who aces me every step of the way until the showdown with a transparently evil Big Bad is right up my alley.

Indy is mostly funny and likable in his determined yet "ugh... this again?" attitude, however Token Girl lead, Marion, is well below what I would consider par.

She's certainly not the worst female lead in the series and she at least comes across as a person, but her whole "I was in love" Noodle Incident and the scenes in which she gets cheeky drunk, puts on a wedding dress, and feebly climbs all over Indy only cement her as a just-another limp-wristed female character in an action movie. The makeout scene doesn't help either. The worst, arguably, is simply how many different characters attempt to claim ownership of her.

The movie's plot itself is pretty heavily oriented around build-up and action and while it may be among the most expositional of the movies it manages to keep a strong pace all throughout which is a huge relief after seeing so many martial arts movies which just tend to die standing up between each fight scene.

We get a lot of different locations and setpieces from the temple to the tomb and the events in and around them never seem repetitive. An escape can just as quickly become a chase and a chase can just as quickly become a fight and while the fights themselves are certainly nothing to sneeze at choreographically, the scenarios change rapidly, tension is set to build, and we get some satisfying punchy sound effects to drop some weight on it.

I'm rather averse to the more gruesome and macabre aspects of the movie's visual design, but as others have said post-Crystal Skull, there's an appreciation to be had for the tangible reality of the actual props as opposed to CG. It all looks good and convincing if nothing else (though you will question how it is that dead bodies can scream).

My last point of interest here is simply the Ark of the Covenant itself, the core MacGuffin that drives the movie. I wouldn't really call it a plothole considering how much of it comes across as creative liberties, but it's certainly some interesting Fridge Logic.

First off, we know that the Ark melts the faces of those who open it, but why? Is it because they're Nazis? Belloq isn't a Nazi. Is it because he's not really Jewish or... Christian? How do we know that? Nazism is pretty heavily rooted in fundamentalist Christianity so it would be odd to assume the Ark takes such a specific stance against them. Maybe it can just sniff evil?

Indy tells Marion not to open her eyes and they go unaffected so it can be extrapolated that they didn't die because they didn't gaze upon "the wrath of god". But what's up with that? Just because they don't look at it they're fine? That's an awful big BLINDSPOT in it's design then, isn't it? Maybe it's because they ARE Jewish/Christian, but that's never confirmed and Indy specifically dismisses that sort of thinking at the beginning of the movie. Maybe he NOW believes which is why he's fine? Seems like a wild stretch to me.

How is it that the Ark was even intended to be hefted "before armies" if it would kill the people carrying it as shown in the picture at the beginning of the movie? Maybe their eyes are closed? The most powerful military weapon is a group of 4 guys with their eyes closed carrying around a bin with ghosts in it?

Why are there even ghosts in it? The Ark was supposed to hold the Ten Commandments, just slabs of stone, so where'd the sand and angry dead people come from? 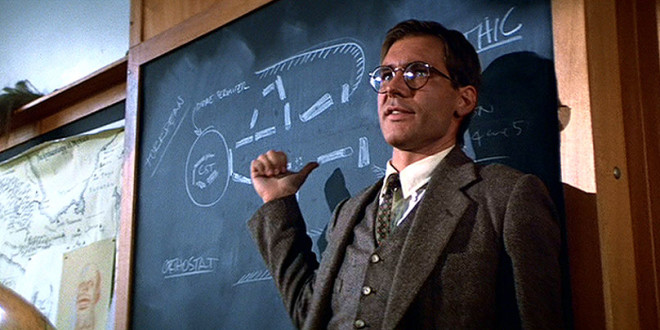 In fact, why is the Ark even dangerous AT ALL? It's a ****IN' BOX! MEANT TO HOLD THE THEN-EQUIVALENT OF PAPER! When the hell did this simple container for holy writ become this CURSED WEAPON OF INCOMPARABLE POWER AFTER MILLENNIA!?

Imagine if this occurred nowadays and God imprinted the ten laws on fax paper and the only thing Moses had on hand was a Tupperware container.

I guess the whole "voice of God" thing kinda makes sense, but it still makes you wonder the catastrophe that could've happen had Indy actually brought it to a museum.

Overall, despite my initial malaise, I still think Raiders of the Lost Ark is a fun memorable movie.