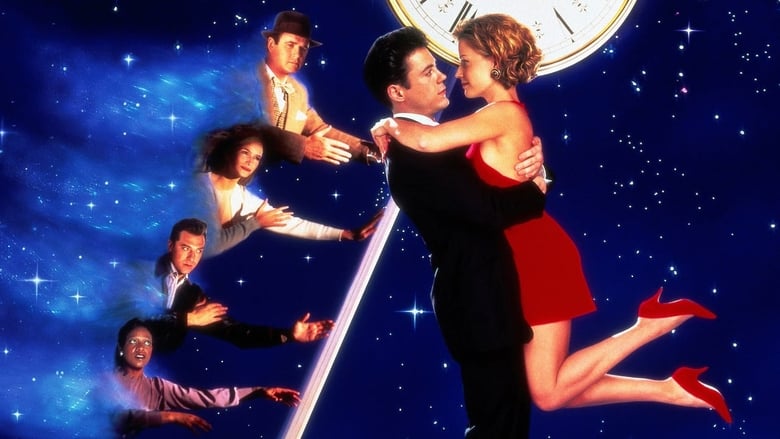 Ron Underwood, whose other directorial credits include Tremors and City Slickers. knocks it out of the park with a richly imaginative, if overly elaborate comic fantasy from 1993 called Heart and Souls, a wonderfully entertaining comic confection that takes the concept of the childhood imaginary friend to an all new and delicious level. One night in 1959 San Francisco, a telephone operator (Alfre Woodard) kisses her sons goodnight to go to work; a two bit thief (Tom Sizemore) fails to retrieve some valued stamps he stole from a young boy; a waitress (Kyra Sedgwick) realizes she made a mistake turning down her boyfriend's proposal; an aspiring opera singer (Charles Grodin) freezes during an audition and walks off the stage disgusted with himself. These four strangers board the same bus, which ends up getting into an accident with a car carrying Bill and Eva Reilly (Bill Calvert, Lisa Lucas), who are on their way to the hospital to have their first child, Thomas. Our four friends die in the accident but find themselves bound to Thomas as proverbial guardian angels whom only Thomas can see and hear.

As Thomas gets older and starts going to school, his guardian angels start to have his parents and teachers questioning his sanity, so the angels apparently have the power to be invisible to Thomas as well, but the inability to leave him. About 25 years later, a grown up Thomas (Robert Downey Jr.) is reacquainted with his angels and learns that he must help them with one final task before they are able to go to their final resting place.

Underwood has undertaken a pretty large task here, thanks primarily to a somewhat complex screenplay by Brent Maddock, S.S.Wilson, Gregory Hansen, and Erik Hansen that presents characters in a very specific and restrictive fantasy that sometimes trap the characters in positions they don't really deserve or understand. It's a little unsettling when we first see the angels with little Thomas and marvel at how they seem to have just accepted what has happened to them. Milo, Sizemore's character, seems to be the only one interested in finding a way out and Penny, Woodard's character, is the only one who seems to speak about her earthly life before the bus crash. I actually found myself getting angry when the angels decided to leave Thomas when he was 7 and the scene of him mourning their departure was heartbreaking, but a little patience was quickly rewarded with a bonus where it was revealed that Thomas still has wounds from the angels leaving him when he was a child.

Underwood has put a great deal of detail in the mounting of this elaborate fantasy, including some really offbeat casting choices that worked...Robert Downey Jr. offers one of the best performances of his career as the troubled Thomas...love the moments where the angels inhabit his body, reminiscent of Steve Martin in All of Me. Sizemore and Woodard are a lot of fun too and loved David Paymer as the bus driver. A warm and winning comic fantasy that left me feeling all warm and gooey inside.
» More about Heart and Souls
» More reviews of Heart and Souls
» More reviews by Gideon58