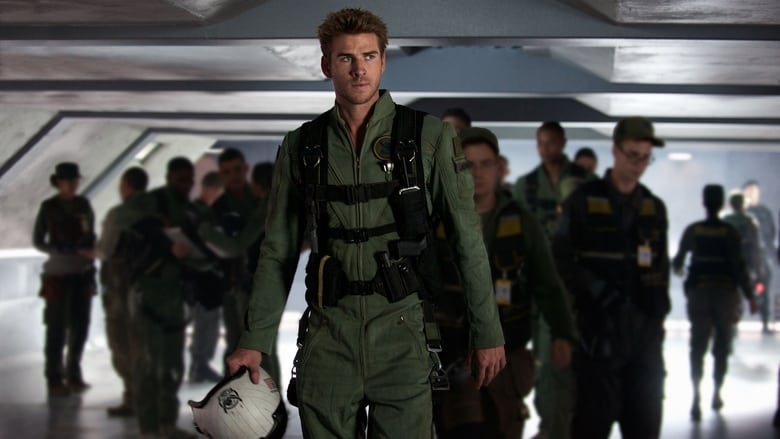 by Sexy Celebrity
posted on 6/24/16
in
INDEPENDENCE DAY:
RESURGENCE

The beauty of the first Independence Day movie is that it's a science fiction movie for everybody, not just science fiction fans. Even though it's unlikely that aliens from outer space are gonna come to our planet in big ships appearing in the sky, and then start to attack us... it's POSSIBLE that they COULD. It's possible that they could. Despite how much we've now seen of outer space, how much we know about it... it's largely all still a mystery to us. Most people believe there ARE aliens out there, and that we're not alone. The chances of it look very likely. We just haven't found the aliens yet. And the possibility that aliens could threaten our existence... that's possible, too.

Unlike ghosts, the spirits of deceased human beings and other animals, aliens might actually exist because we DO have a kind of proof that aliens could exist... ourselves. We know that there are LIVING things in the universe because we, and all the other creatures we exist with, exist! Sooooo... since we know there are living creatures on Earth, there might be living creatures elsewhere in the universe, and if we can be violent creatures, they might be violent creatures, too. They could wipe us out. So, Independence Day wasn't just a science fiction movie. Not on every level, at least. It was a war movie. It was a war movie about one of our greatest fears -- the unknown assassin. The unknown. The threat of our annihilation. The aliens were just another form of death. Independence Day could have been about a deadly cancer or some other disease trying to wipe us out, with the victory being that we defeated it. So that movie, I think, really resonated with us because it gave us death in a unique kind of configuration -- the living creature from another world that wanted to conquer our own world.

And then there's the sequel.... Independence Day: Resurgence.... out twenty years after the original movie, yet they really didn't have to wait that long for this thing. It plays like a bad TV movie sequel to the original. It could have been a 1998 TV movie with a very high budget. It's a total miscalculation and it's absolutely shocking that it even exists. It's the kind of sequel you hear about possibly happening... the director/writer of the original film teases about the plot he has for the sequel in some magazine... it sounds really, really cool... but for some reason, they don't make the movie, and you're disappointed, because you think it sounds like an EPIC film. You're mad at them for not making the movie.

What I found out is... they don't make sequels that sound so good FOR A REASON. And Independence Day: Resurgence is an example of that reason at its finest. Let me say this -- I give mad props to them for doing this movie. Really, I do. This is a bold, ballsy sequel. It's not trying to be like the original movie. It's trying to stay true to the original film, for the most part, I believe. It doesn't repeat stuff, like a lot of other sequels do. It totally evolves from the first film and shows us characters who have aged, who have died, and it shows us new characters, the next generation, because life moves on and new people take over things. It has its heart in the right place.... but as a movie... as the sequel to a cinematic blockbuster... one of the centerpieces of '90s cinema.......... WHAT WERE THEY THINKING?!?!?!

Describing the plot of this movie is complex, confusing and boring. Watching it is even worse. So much happens early on in this movie that... I just didn't really understand what was going on. As I said -- the first Independence Day movie was a science fiction film you could enjoy even if you weren't a science fiction fan. NOT REALLY THE CASE HERE, I felt. The film RELIES on the fact that the 2016 Planet Earth in Independence Day: Resurgence is a TOTALLY DIFFERENT WORLD than the one we know ourselves, which was not at all the case in 1996's Independence Day, which had the world exactly as it was then.

There are moon bases and airplane things that don't even exist. Some of these planes looked paper thin to me, as if Calista Flockhart designed them (gotta do a '90s joke since we're all nostalgic here with this movie today). There are these "tugs" and huge mechanical cannons that are supposed to blast away aliens. In only twenty years, somehow, they've managed to learn so much from the crashed alien UFOs and technology that was recovered in 1996 to the point that they've just... evolved MASSIVELY. Completely gone is the Mad Max wasteland we saw at the end of the first movie. They are now BETTER THAN EVER! In fact, they've even rebuilt the White House and everything. You would think mankind might take a break after the HUGE fight they went through in 1996. A little breather. But NOPE! They have been BUSY, BUSY, BUSY.

And really.... all of that.... somehow can't be forgiven, I feel. This dramatic change in how the planet runs now in this movie.... dramatically changes the feel of the franchise. But let's suppose they could SOMEHOW make that work... they didn't... and why? Because the new characters are sh*t and the old characters are even sh*ttier.

Vivica A. Fox? If you run to the bathroom for a potty break, you might miss her. Hell, you won't be running to the bathroom during this movie because YOU'LL BE ASLEEP! Unless you are a bedwetter (or a theater chair wetter), you won't pee because you'll be asleep. Or, you'll be talking about the film in THE MOFO CHILL CLUB thread, as I was doing during the movie!

Jeff Goldblum? Similar to the way he was in the first movie, but WAY downgraded. His best moments seem to occur with his father, Julius, but they're only together in this movie for like FIVE MINUTES. I'm serious.

Bill Pullman was a JOKE here, but when he does act in the movie, you'll realize right away that he's probably the best thing Independence Day has got going for it, in this movie and in the original movie. I thought that when I rewatched the first film the other day, and I thought that today while watching the sequel. But he's a SHELL of his former self from the original movie. WORSE than a shell, in fact.

And WORST OF ALL?!?! Brent Spiner as the Dr. Okun character, the strange, creepy looking long haired Area 51 scientist from the first movie. He gets a MUCH larger role in this sequel -- AAAAAAND -- HE'S THE NEW GAY GUY! The biggest romance in Independence Day: Resurgence is a gay romance between Dr. Okun and his gay lover, a Dr. Isaacs character, who I believe was also in the first movie. Forget the romance between Liam Hemsworth and Maika Monroe -- that was really nothing -- Dr. Okun and his bearded boy toy are the MAIN romance of the film! 'Cause, see, like, Dr. Okun has been in a coma for 20 years since 1996, and his boyfriend has been taking care of him, and then Okun finally wakes up and immediately sets to grabbing his boyfriend, bending him over the hospital bed and probing him for awhile. You get the picture.

And speaking of pictures -- not a very pretty one! What's happening? Sure, Harvey Fierstein in the original film was no looker, but what a nice little lovable FLAMBOYANT gay he was. When he got engulfed in flames during his death scene, at least the flames matched his personality. HERE, Dr. Okun and his loverboy... Dr. Okun isn't really masculine. His lover kinda was. But they're missing much of Harvey's flamboyance. The flamboyance of Harvey Fierstein has been traded in for two ugly gay guys -- gay Doublemint twins of ugliness. And what a hideous scarf thing Dr. Okun is wearing, too!

ALSO -- how IS IT?! that Dr. Okun had been studying alien technology -- everyone had been studying the crashed alien ship from the 1950's for YEARS in the original film -- and they couldn't build much technology from it -- but suddenly, they know EVERYTHING after 20 years with the new downed alien ships they got to study thanks to the 1996 attack. How does that happen? Thought I have.

Other new characters include the big, burly, black son of an African warlord, called Dikembe Umbutu, who has a lot of experience with killing aliens that crashed on Earth's surface in 1996 and managed to live and roam around for years. There's this new geeky guy -- I don't even know what his name is -- and he's afraid of everything, but he wants to kill aliens like Dikembe does, with the big knives/machete things he's got on his back. At the end of the movie, the geeky guy, I guess, becomes sort of a hero (I think? I was sorta asleep here) and finally Mr. Dikembe turns to him and says, "YOU HAVE THE HEART OF A WARRIOR." I was expecting him to finish with, "But you have the brain of a moron" or something, but it didn't come. NOTHING comes in this movie. Except Dr. Okun and his gay boyfriend.

Probably the MOST annoying new character was this new foreign lady girlfriend for Jeff Goldblum.... totally forgettable. I don't even know what her character name is. All she does is trot around and translate sh*t.

A FRIENDLY alien. And it looks like a big white testicle with a slit in it. That's all I'll say.

Okay, I'm tired of writing this review. Time to turn a bunch of words in it into big colorful words. It's a very disappointing sequel. One of the worst sequels of all time, I think. And yet at the same time.... I do give it mad props for what it tried to do. But I don't think this is the Independence Day sequel we all really wanted. They should have just NOT made the movie, in all honesty.

The last sequel I saw that was this bad was Basic Instinct 2 in 2006.

Oh and one last thought -- another BIG, BIG, BIG problem I had with this movie -- it takes FOREVER for the aliens to arrive on Earth and attack. And when they DO attack, it seems like it's hardly started. Unlike the first movie, which had such GREAT tension -- a great buildup to the moment when the alien ships finally attack Earth -- ALL OF THAT IS GONE HERE. All of it. Instead, the film focuses on getting to know all the new characters. That takes up the first half hour or so of the movie, and it REALLY, REALLY SUCKED, I thought. It sucked so much I threw a $20 bill at the screen and told it to meet me in the bathroom after the movie.

I felt a chill go down my spine when the aliens actually arrived... but I was let down by their whole show.

One really nice thing about the movie? Something that sort of made up for a lot of the bad -- the alien queen. This movie is the Aliens to the original movie's Alien, but without all of the brilliance.

And as for Will Smith's abscence -- nobody's gonna blame him now for not being in this. It's OBVIOUS why he's not in this. He dodged a career bullet. Even though he's been HIT BY MANY OF THOSE BULLETS ALREADY, he dodged a really big one here.

My rating right now after one viewing: