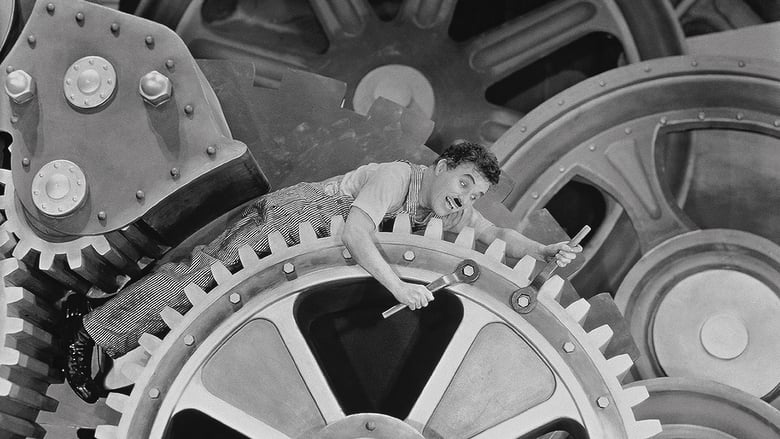 An impoverished factory worker gets into a series of misadventures.

Classic Charlie Chaplin - you can't really write reviews about his films in 2015. Modern Times arguably has the strongest claim to being his best film, but that doesn't necessarily make it so. It sees Chaplin as an ordinary factory worker who tirelessly toils away on an assembly line. From there, he gets into a series of misadventures at the factory that leads to him getting fired and bouncing around between a variety of jobs, homes, and even prison (which he becomes so used to that he co-operates with the personnel and even tries to get himself arrested again after his release). He also ends up crossing with paths with a young woman (Paulette Goddard) who has to resort to petty crime in order to take care of her impoverished family. That's basically all the plot that this movie has as it progresses through a series of tragicomic segments until it decides to just end. Given its comedic nature, I can understand that plot is not the most important aspect. That's where Modern Times falls prey to the same problem I've had with the other Chaplin films I've watched - I just don't find it that funny.

That's not to say that Modern Times isn't completely devoid of mirth because there's clearly a cleverness to the proceedings that helps the film stay somewhat fresh even now. A lot of that has to do with how many of the sequences are derived from Chaplin's concerns with the state of the nation in the time of the Great Depression and even now feel sadly relevant. Something like Chaplin's character being institutionalised by his time in prison is played for laughs, but considering how hard things are on the outside with unemployment and whatnot, it seems somewhat plausible that going to prison isn't something to be avoided at all costs but actually sounds like a valid way to survive such a screwed-up world. There's also a satirical bent to a lot of the sequences even if they don't elicit much in the way of actual chuckles. The most obvious instance would be an early scene where an inventor creates an automated feeding machine designed to make workers more efficient by making them eat faster and waste less time on lunch; this obviously gets played for laughs when Chaplin is strapped into the machine and it naturally starts going haywire. Of course, not every gag in the film requires some sort of analytical subtext to pay off and are sometimes just nothing more than Chaplin and Goddard trying to find a moment of joy amidst their difficult existences (most memorably in a scene where they try on roller-skates in a department store where there's a conspicuous absence of guard-rails...).

Arriving after the advent of talking pictures, Modern Times does attempt to balance speech with silence but it doesn't exactly work. The film initially seems to rely on speech when it comes to having the factory boss address workers or in having a recording that describes the feeding-machine to the factory boss, but it all but abandons that conceit as the film wears on and it starts relying on title cards like a regular silent film. The gags are pretty sporadic in terms of quality, with a lot of the usual slapstick that does veer into surreal territory at times, especially when it involves factory machinery (including one gag where Chaplin falls into a conveyor belt and travels through a cross-section of the machine) - and, this being a silent comedy, there's also a fantasy sequence or two. The emotions on display may be broad, but they admittedly work as the unlikely bond that forms between Chaplin and Goddard over the course of the film still carries some genuine emotional weight. Between the solid emotional core and the cleverness of the writing, Modern Times may not prove to be a laugh riot and it does have moments that don't really work (such as that whole sequence where Chaplin and Goddard must work in an upscale club/restaurant) but it's a fairly dependable little film. I do have to wonder if the reason Chaplin's films are considered great is because there's nothing about them that is obviously great - they're just these films about this funny-looking little fella getting into mishaps without ever losing heart. That heart is a vital component that guarantees a certain dependability to Chaplin's films that adequately compensates for any shortcomings.