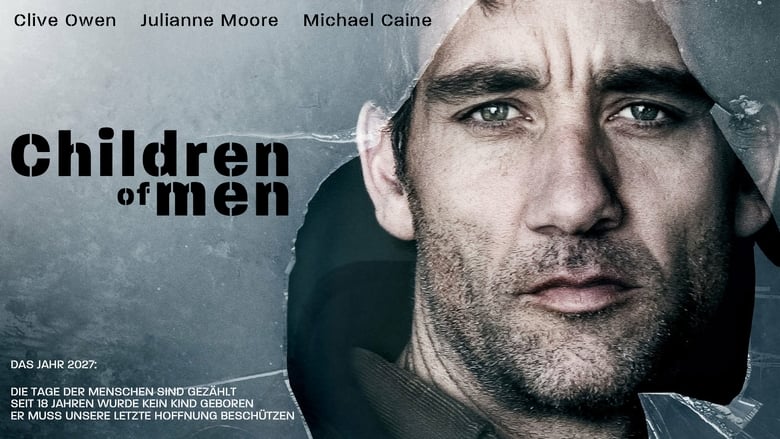 by CiCi
posted on 9/01/15
in
There's a few days left of my summer holidays, I've been in denial over the amount of work I've got left to do for sixth form starting again, so I really need to buckle down and start doing it. In other words, my "review output" will be slower from now on for the time being. But, I promised MM I'd review this, and linking it back to sixth form again, I actually studied this for Film Studies for British vs Hollywood sci-fi films post 2005. So, I'll review the 2006 Children of Men.

The plot follows a disillusioned, middle aged man named Theo (Clive Owen), one of many people who has developed such a negative attitude towards life since the entirety of the world has become infertile. However, Theo's life regains purpose once he discovers a young immigrant, Kee (Clare-Hope Ashley) who is the world's first pregnant woman for over 18 years. This revelation causes untold havoc, and Theo must do everything he can to protect her and help her flee from a corrupt and nightmarish Britain.

Positives
It's such a powerful narrative, and it's a brave adaptation. I basically say that whenever a film diverts from the original story yet still produces something just as beautiful and striking as its original form was, and this was a spectacular film to say the least. The dialogue was thought provoking, and the characters were extremely authentic. These people were heroic, yet they weren't caricatures of infallible comic book heroes who contain no flaws either. Additionally, I don't think a film has displayed how precious and gorgeous life truly is, and the reactions of people upon seeing a new born baby was unusual but overwhelmingly heart warming too, a war ceases upon the hearing the cries of a single infant! It was a simplistic thing to implement when you think about it, yet it was so incredibly imaginative and thought provoking too. I'll put the scene here, because it's too beautiful to be ignored, and it sends shivers down my spine every time I see it.


Emmanuel Lubezki is probably the greatest cinematographer working at the moment, and this film perfectly proves why. The long takes were enchanting, and once again thoroughly proves as to why a moving camera is better than a static one, the camera managed to capture subtle, yet important details and references, to both works of fiction and to real life events that further illustrate the terror of an apocalyptic and totalitarian Britain. For example, 1984 is referenced via the institution Theo works at. Abu Ghraib is referenced as well (pictured below, it's a blink-and-you'll-miss-it moment, so it's easy to miss), once again to enforce how sadistic and relentlessly strict the British government has become.

This film tackles numerous topics that are extremely relevant at the moment too, such as religion, and one point this film made that I loved, with its stance on immigration. The immigrants fleeing into Britain (the only country left functioning) are treat like dogs, and are spoken to as such, and as Britons will know, a certain political party that de-humanises immigrants has gained notoriety recently, despite their disgusting attitudes and beliefs towards them and, ironically, working women/mothers. Yet this film exemplifies how we all experience the same hardships, and how, essentially, we are all the same regardless of race, gender or nationality. Additionally, all of these points are delivered in a subtle manner, nothing is ever shoved in your face, and we as viewers are left to figure out certain details on our own, and it's refreshing to have a mainstream(ish) film actually acknowledge that people are capable of possessing more knowledge than a cabbage.

The documentary style of the film is also particularly terrifying too, for the sole aspect that this film is not too far removed from reality. Had that group got into power, this is what Britain would probably end up looking like in the near future, and that's a petrifying thought, because this sort of treatment is happening currently throughout the world too, and it's impacting to say the least, and I think this was one of the points this film was trying to deliver. This also meant that its portrayal of violence was realistic too, and the result was bleak, but gripping and magnetising too, and all of this is featured within a single scene, that I'll put below!

I'm from the North East of England, in a city not too far from Newcastle, yet for a city so big, it's quite rare for the infamous accent to pop up, so I quite liked that aspect! Although I do not pity anyone who needed subtitles for what he was saying, especially when he sung that song!

Julianne Moore was exceptional, but was sadly barely in this film, I'm glad she attained dual citizenship, because it's difficult to imagine anyone else in her role. I also loved Pam Ferris, such a lovely woman who finally appeared in something that hasn't just been seen on these shores, she deserves every bit of exposure she can get, and her performance here was brilliant, considering she could have over-acted an information dump part way through the film.

Finally, the soundtrack, like many aspects of the film, was subtle, but so gorgeous too, and I was taken aback, because it truly was so exceptional!

Negatives
This isn't a negative by any stretch, but the acting on the whole wasn't as brilliant as every other element of the film. Clive Owen was okay as the lead, but nothing more, and the same applies for Clare-Hope Ashley (what happened to her actually?).

Conclusion
A gorgeous yet equally terrifying parable about the darkness of humanity and what awaits should we become so heartless and compelled by false conceptions regarding our peers. This film is a beautiful tale about the compassion of mankind, even in the face of danger. Far and away, this one of the greatest British films ever recorded, and it certainly should not be missed.