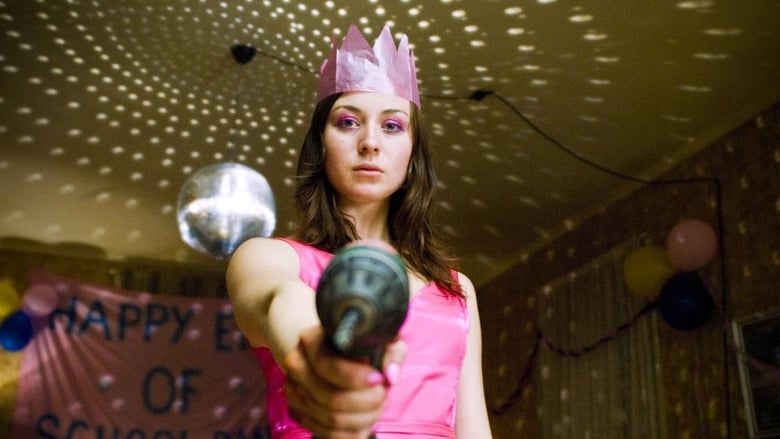 Australia have produced some controversial films in recent times, most notably Wolf Creek which seems to be of a similar ilk to the 2009 hit, The Loved Ones. Also, I absolutely adore Australian accents, so I decided to check this one out! And thanks to Cole for recommending it!

The Loved Ones follows the disillusioned teenager, Brent (Xavier Samuel), who finds himself at the mercy of Lola (Robin McLeavy) and her 'Daddy' (John Brumpton) simply because Brent rejected Lola's offer to take her to the prom because he was already going with his current girlfriend, Holly (Victoria Thaine). Nevertheless, Lola creates a sinister plot to exact her revenge.

Robin McLeavy was fantastic in portraying Lola not only as a psychopath, but as an immature and emotionally vulnerable young girl, effectively creating a broken human being who simply cannot navigate herself around any difficult circumstances and realities that confront her. This, despite her sadistic tendencies, allows us to sympathise with her somewhat, because she comes across as a young child who was raised in an awful environment which also explains why she simply can't handle it when she is told 'no'. Additionally, when it's quickly established that Lola is a social outcast, we can't help but pity her a tiny bit, because a lot of her flaws have been created due to the actions of others, and creating a murderous psychopath who we can sympathise with is extremely difficult, so not only is Ms.McLeavy to be praised, but, the writers are as well for their co-operation with one another produced something fantastic.

The torture scenes were particularly brutal, even though we never actually saw very much explicit content really, so Sean Bryne (the director and writer of the film) did very well, especially considering this was his first feature length production. In particular, a scene involving a power drill sticks in my mind the most. However, not showing too much gore actually works massively in the film's favour, because when we eventually see the aftermath of certain events, it's hard hitting and certainly impacting in several places throughout the duration of the film.

Sadly there are quite a few of these. To start with, there was a significant sub-plot involving this odd romance that ended up having a minimal amount of relevance to the main story. It was so pointless, and I can't understand why so much time was dedicated to it. The characters involved as well, Mia and this other boy that's so stereotypical he might as well have not have been granted a name (I can't remember it anyway) are so dull, I couldn't really find anything likeable or charming about them really, and those sequences were extremely boring. It was so bizarre, I just can't get my head round why it was there.

Another thing in consideration to the writing that I didn't enjoy at all was how they had to give Brent a tragic background, why TV shows and films constantly feel obligated to create protagonists who have been scarred by some traumatising event in the past is always lost on me, because it seems to imply that people have to be given some sort of far-fetched reason to want to achieve justice, when that's not the case. Any ordinary person would have done the same thing Brent did, and it would have made the while film feel far more authentic and real.

The acting by most of the cast was pretty mediocre as well, although the performances delivered by some of the main cast were quite weak. To start with, Xavier Samuel has the weirdest scream known to mankind, I don't know how to describe it really, if you've seen The Descent then you'll probably remember the cave dwellers? Well if you remember the weird noises they made, then you've pretty much envisioned what his scream was like, it was a weird screech that sounds absolutely nothing like an ordinary scream or vocalisation of pain, and I found it really off-putting. Mr.Samuel also shared no chemistry with his supposed girlfriend, so I had to suspend my disbelief a little bit there too. A part from that though, the acting really is okay.

I also didn't find the sadistic family dynamic very scary, and I think it's because it's been done several times before, most notably in the original Texas Chain Saw Massacre. And in recent times, it was done in Great Britain just several years prior to the release of this film, in the film Mum & Dad, which I think worked better in this particular aspect. Also, considering there are only two people threatening Brent, it feels a little bit underwhelming (don't get me wrong, it creates some magnificently wicked scenes, like the drill and kettle one) but they didn't feel so threatening, and I think it may have worked better if Brent had even more people to overcome.

Finally, the soundtrack. In the first half hour or so, there is literally always a song playing in the background, and I'm not talking about a faint, distant soundtrack, I'm talking about heavy metal, rock or pop songs blasting for a good while, and I found it really distracting, because it didn't really fit the emotion of the scenes it was paired with. However, this isn't so much of a major put off, because after this first half hour, it's nowhere as prominent or distracting at all.

It's difficult, because many of the positive aspects of this film were counter-balanced by major flaws too. However, Robin McLeavy was a real find, for her acting was amazing here. I want to like this film, because there's a lot of things to really like, but there are also a lot of things that put me off hugely, so I'm just going to have to go halfway and give it: