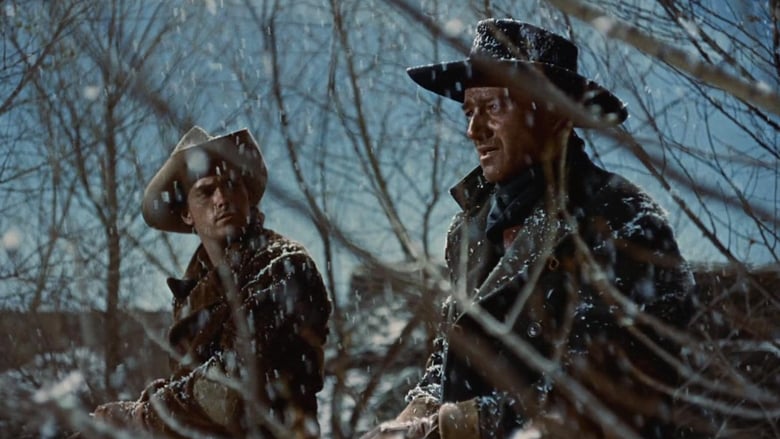 I am going to start off this review by saying that I think John Wayne is one of, if not the most overrated actor of all time. He always gives a stilted performance, he stumbles through his lines, and he delivers them with no emotion. But even though I don't like John Wayne, that doesn't mean I don't find his films enjoyable.

The Searchers is about a Civil War veteran who returns home to his family, only for them to be murdered soon after. He and his adopted nephew then go on a mission to find his kidnapped niece. What follows is the greatest cowboys vs indians tale ever put to film. One of the greats things about this movie is its use of landscape. Almost every single shot is absolutely breathtaking, and it is by far the most beautiful Texas has ever looked in a film. Even though the dialog can be awkward at points, I still think it is a very good screenplay that has moments of genuine humor and heart. Most of this heart comes from the love B-story that occurs in between the scenes of action. So while the landscape and cinematography made The Searchers a great western. The screenplay kept it from being boring.

The biggest problem I have with this film is no doubt the acting. I already told you that I hate John Wayne, but everyone else also gives a below par performance. The acting was either way too serious, or way too comedic and silly. For example, Jeffrey Hunter (Martin) gave a very over the top performance, while Ward Bond (The Rev.) gave such a silly performance that I couldn't take him seriously even when I was supposed to.

I used to think that once you've seen one western, you've seen them all, but this film proved me wrong. It was unique, entertaining, and most importantly, fun. If you like westerns, watch this film, luckily John Wayne didn't ruin it.