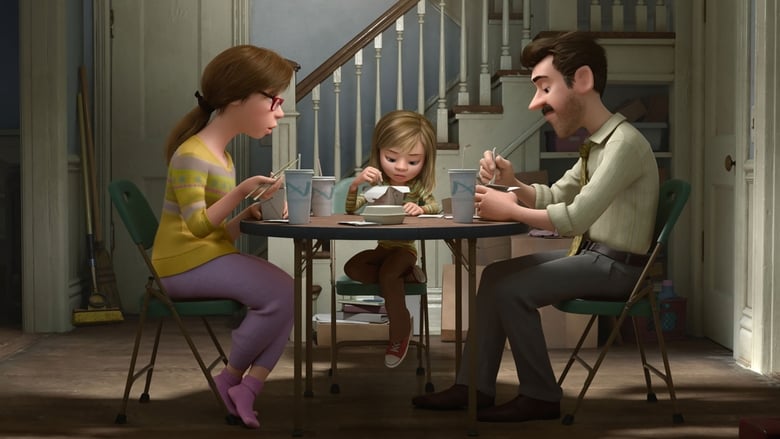 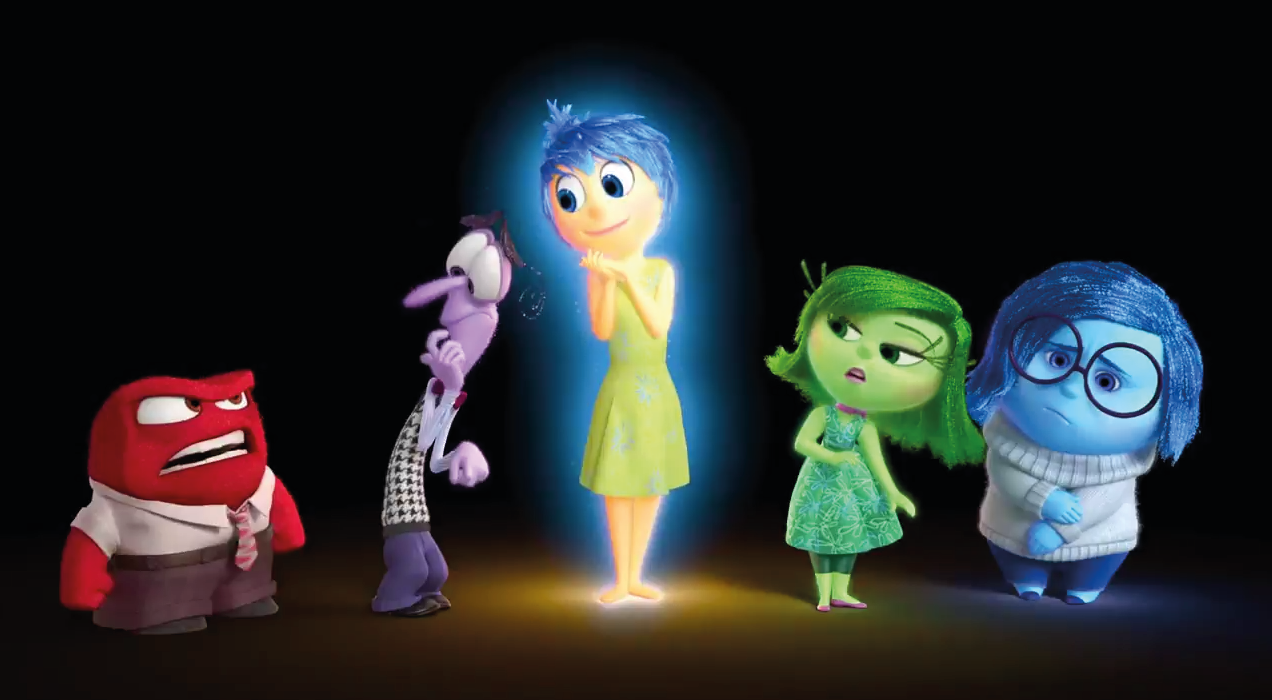 Joy tries to get things organized by group hugging.

One of the greatest strengths and redeeming qualities of Pixar studios is that their films have a magical, sincere ability of unifying generations of movie-goers with pulsing, bright ideas and superb writing. It also usually takes night of living toys, superheroes, monster in a corporate world like ours, but this time around, it's entirely human-based, exploring characters remarkably similar and relate-able to us, while throwing in psychological insights, because who knows, what if our brain is really controlled by minuscule voices deep inside the core?

The plot is pretty much the most simplistic one Pixar has ever devised. It is a comedy-adventure, and a memory related disaster film revolving around Riley (Kaityln Dias), a girl living in Minnesota with her mom (Diane Lane) and dad (Kyle MacLachan), happy as can be alongside a best friends and a passion for hockey, until disaster strikes. Riley's dad sets up a new business, and as a result, the entire family is forced to move to San Francisco, a literal death sentence full of broccoli pizza and traffic congestion. What's worse, instead of Riley trying her best to fit into a new place, she keeps reminding herself of what she doesn't have anymore.

This story begins from not the moment of new arrival, but from the very beginning. As Riley is born, receiving a blinding operating room light, so are her emotions. Joy (Amy Poelher) is the first one to emerge, but in order, suddenly Sadness (Phyllis Smith) pops up, and then Fear (Bill Hader), Disgust (Mindy Kaling), and Anger (Lewis Black - great casting choice btw). But these five are not solely attributed to their names that describe them. In this film, in place of humans, they are the most human aspect of this film. They are not limited to a certain emotion or personality, and it makes them similar to us, diverse, flamboyant, and dynamic, not static, individual that each has a role in society, but in this case, Riley's thoughts and actions. Because of our differences, we bicker and fight over each other's opinions, but in the end during a time of happiness or oppression, we are united, and slowly friendships start to happen. The emotions in Riley's obviously want to tear each other apart, but it shows signs of caring for one another and a real, benevolent bond.

Nothing can be perfect though, as there is a level of class among the fantastic five. Joy is the clear leader, she is always bright and energetic, a workaholic whose only purpose in being active all day is to keep Riley a jubilant being. Fear, Disgust, and Anger are in the middle, and Sadness is a noticeable bottom rank, an outcast. She keeps ruining Riley's happy memories by touching them, due to obvious instinct, thus she is mostly in quarantine, away from the control panel.

When Riley arrives at San Francisco in an unsatisfactory mood, the five emotions try to do anything they can to cheer her up, But a chain of events leads to core memories being contaminated by Sadness' touch, and Joy and Sadness are sucked into an outside area, inhabited by islands representing Riley's personality, and rows of shelves containing illuminating balls of memories are endless.

The animation is a whole new level of greatness, as always, but at first it is not easily noticed. The world of Inside Out takes place in an incomplete, premature, unstable, and brightly surreal atmosphere looming over various "lands". Therefore, the animation is not crystal clear and Joy and Sadness feel out of place, because they are somewhere that shouldn't be accessible to them. Graphics are also cleverly used to give off a mystifying, endless feel with bizarre objects surrounding in no particular order, the order is spontaneous and sporadic, placed whenever Riley gets caught up in something new, or crumbles down when she loses interest. When we get to explore an abstract thought processing room, high quality technology is used to create one dimensional geographical shapes that could have easily existed 20 years ago. Sometimes less is more, proven in this film.

The humor comes from (1) an immense amount of content anyone can sympathize with and (2) twisting and toying around with the existing, Pixar-esque creativity at it's finest. Inside Out is about the voices inside our head, but it is also a casual, poignant, and warm look at the progression of life and growth. One example is a young Riley refusing to eat peas, behind that is Fear, Disgust, and mostly Anger. The build-up to the joke is great, and it leads to a satisfying finale, but it certainly is a bit predictable. Then later one comes a running gag, a consistent pop-up of an annoying but helplessly addictive gum commercial. Is there anyone who can't react to that without a slap on the knee and laughter? Amusement comes from the very basic piece of life which is yes, sadly, flashy ads. Second, twisting the old comes from mostly "ImaginationLand" and the outskirts. Areas similar to ImaginationLand has been portrayed countless times in animation, but never has there been a conveyor belt and a mini factory next to it that produces imaginery boyfriends (they have a striking resemblance to Justin Beiber!), shouting "I'll die for Riley!". And a train of thought, that expression, becomes an actual "train of thought".

As the perilous journey of Joy and Sadness continue, they meet a variety of characters, the main one being Bing-Bong (Richard Kind), Riley's old imaginary friend. For years he has waited and wandered, maintaining his own silly and naive self, hoping that one day Riley would remember him again. He still keeps a rocket that Riley once made with Bing-Bong, now only existing in mere faint fragments of the mind, but complete as an imagination, which runs of song power, and can take people to the moon.

Just the presence of Bing-Bong is bone-crushingly heartbreaking. It reminds me of the song 'More Than a Feeling" by Boston (which was in fact used in the trailers, excellent choices of music). Actually, it may describe the entire film. Bing-Bong can, "still recall as I want to know" (lyric from the song), but Riley no longer has interest. On the flip side, Riley can remember all the wonderful, spotless things about Minnesota, but reality doesn't allow her to go back in time. Inside Out is a film that can be described as a sparkling, energetic collision of emotions and memories, they crumble, and then are shaped in a different form, improved, as we grow up and enter chaotic society, and when we look back, "the faces fade as the years go by", but the experiences, the touching moments and the heart-pounding thrill rides of bonding and separating, ceaselessly beating back and forth under a lonely night view remain inside us, and complete us. It is obvious that the writers studied actual psychology, instead of movie versions. Inside Out captures the sublime beauty of all of the above in simply 102 minutes.

All the forgotten experiences, according to the film, are chucked into a dark, deep pit to vanish into smoke, a pit located in the middle of everything, like a black hole. Joy and Bing-Bong end up in there, and inside Joy realizes the importance of Sadness, and how it plays a role in giving perfect birth to spotless Joy. It is one of the finest twists in recent movie history, a twist I can only describe as plain brilliant. In enter your trembling throat and travels deep into your heart and melts it down, and know it all makes sense. Suddenly, old memories tucked deep inside rows of spherical fragments of life, started to ignite, and like of series of classroom lights turning on in order, from back to front, kept advancing towards me in a blazing, hope-filled craze and hit me in a weak point, and I broke down and started crying.

(Spoilers in the below paragraph only)

I also cried, yet again, when things come to full circle, and Riley lets down everything she kept from her parents. There is a moment of silence, both on screen and with the audience, and i wanted to smack the idiot who kept consuming buttery popcorn. Riley's parents have their moment of silence too, then embrace with impeccable, absolute paternal love, the three seemed to be shielded by an invincible air of pure love and care. I broke down, but this time it was a bit different. i tried to hold back my tears a bit the first time, but on the second touching moment, it was after the film taught me the virtue of possibly the most disliked emotion. I let it all out. But it was not the type of tears flowing when let's say, your pet dies. rather these tears were a mix of every emotion to ever exist, a bundle of transcendence. It was filled with pure joy, thankfulness, and it felt exceptionally good. The holding back of tears and sadness, a common teaching by the unforgiving reality, had made me forget how good it is.

A quick note to parents before i end my review: When your child seems down in the dumps. don't try to interfere with endless amounts of evident-less enthusiasm. Instead, sit down next to him/her an ask what's wrong, and try to understand, hug and cry together. Sadness, anger, disappointments, and even a short run-away from home (I'm an expert on that), a sign of independence and maturity. It is what forms a well-rounded, emotionally sturdy person, I am so lucky to have gone through all that, and it didn't turn me into a regular criminal who raids houses for crack.

Btw, even if you didn't like the film, don't leave in a hurry, because there are some amusing scenes venturing into the mind of various people and even animals. My favorite one is the teacher one, probably because I'm one myself.