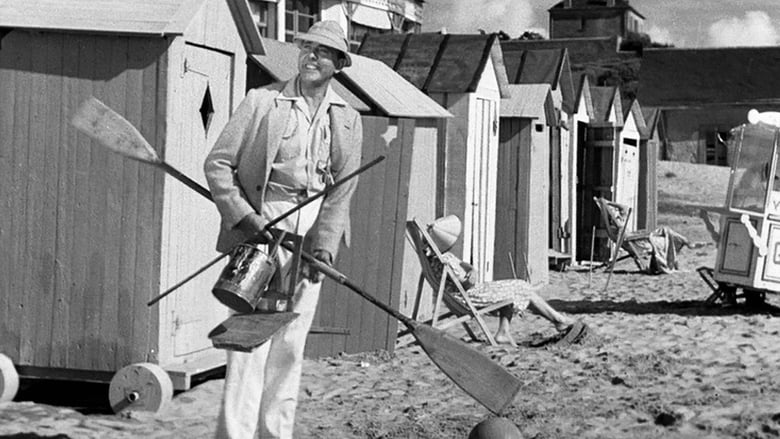 
There are people who just can't handle vacation. Case in point: the people in Tati's Mr. Hulot's Holiday cheerfully arrive at the beach, yet ironically complain about the scorching sun and have a boring sense of fun. To them the point of vacation is chatting in the dining room all day long. Then arrives our titular hero, for the first time in cinema, to expose and satire the behavior of typical stuck-up, and frolicking people who have self-centered mannerisms, by being himself. Thankfully, his brilliant character doesn'trealize how much he bothers others a lot, and not please a lot (mostly only a friendly old lady) so we can enjoy a bunch of cleverly constructed physical and sight gags. I'll get to them later.

Many regard this film as a gateway to Tati, and I agree. The film is extremely laid-back, quiet and peaceful, a great way to sink your teeth into him. For these reasons, the film is literally feels like an actual vacation. As all great vacations should be, it isn't forced or rushed, or even very active. Most of the 2 hours takes place only on the small beach and the fortifications surrounding it, with an exception of a couple of scenes. Yet they never feel boring. They are explored with such cautious timing, preciseness, and looking at ordinary things in a new way, as if Tati is a pioneer trying to dig up the hidden treasures contained in components of average life. And he succeeds immensely at every moment.

Mr. Hulot's Holiday is a "comedy" but only when categorized by solely film genre, but it isn't t at all. This film has a genre of its own. It's a visual comedy, but doesn'tt have any similarities to for example, Edgar Wright's work. It is a comedy about the things we are missing in busy urban life – simple minded joy, leisure, and good fun. The characters are looked upon on a pure child's point of view, a child that can see clearly The Emperor is not wearing any clothes.

So from that point of view, explores the boundaries of comedy, often venturing beyond them and often altering them too. In usual comedies, we are first given the huge bang, the punchline, as fast as possible, and then move on to whatever plot needs to be discussed. In Mr. Hulot's Holiday, the gags are built up and planned from such miniscule clues and minor triggers. As the build-up continues, so do the characters, but only to a non-excessive point. There is no need for separate exposition or even any dialogue at all. Every moment in the film is a climax and a natural, cleverly daft observation of the people who roam around in the beach and hotel.

Such joys come from the power of details hidden in simplicity and pairing with a little, repeating tune (which does an excellent job of telling you that something fun is about to happen). Consider the annoyingly hilarious sound of the door in the dining room whenever somebody exits. Or the dog that is a car-cist and only sleeps in the middle of the road when a more low-quality car passes by. When Hulot passes by, the scene takes 3 minutes to finish, which gives you an idea of how broken-down and comical his car is, without having to explain it myself. These details float in together in an endless sea of creativity, colliding and separating, then colliding again, in the process providing fuel for the entire 2 hours of the film to roar out with so much subtle energy and brilliance.

I mentioned above that the film literally feels like a comfy vacation. In a world full of only facts, answers, and flashy news articles, Mr. Hulot's Holiday is an easily accessible escape hatch. Tati constructs his films with "how", "why" or "maybe"- the essential questions - and bright, rustic ideas illuminating dreamily. For this reason, I believe the film has no specific "answer" to it. Why does the door keep making springy sounds? Why does the dog a car-cist? They don't need to be answered, and never should be. Everything is part of the flow.

My advice when watching the film is to sit back, relax, and enjoy. The simple-minded joys for me came when I discovered a couple of sight gags in the background and became a bit proud. Let it all sink in. After all, you're on a sweet, nostalgic vacation.