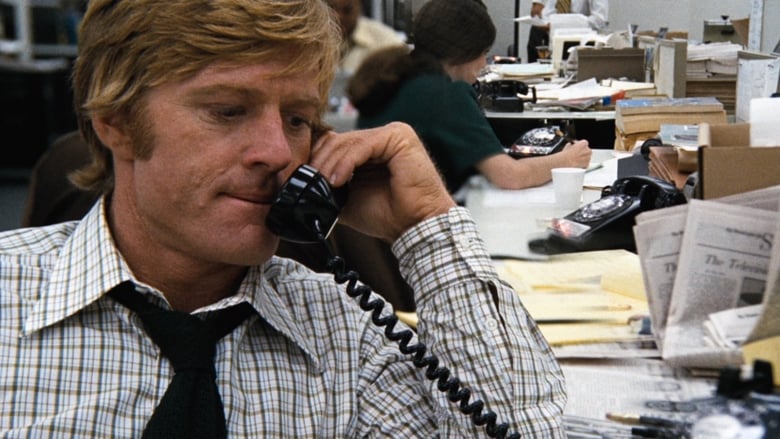 Based on the true story of Bob Woodward and Carl Bernstein, two journalists who work to uncover the conspiracy behind a hotel burglary that would eventually be known as the Watergate scandal.

It's not often where you think of a film as a screenwriter's film (excepting the many instances where the director is also the screenwriter, of course) but when I think of such a well-regarded screenwriter my first thought is William Goldman. This instance is different in that he is working off existing material - namely, the book of the same name written by Woodward and Bernstein. Goldman, of course, is capable of giving the material his own spin with a tightly written tale about the struggles in trying to uncover and deliver the truth behind the notorious break-in, which often involves a lot of unco-operative civilians and officials both inside and outside the press itself. The cast and directing naturally rise to meet the challenge set by the strong writing. Robert Redford and Dustin Hoffman make for great leads as Woodward and Bernstein respectively - I thought it was a nice touch that they never had any initial conflict upon being paired together and that their in-universe personalities weren't simplified for the sake of creating contrast for the sake of contrast. The supporting cast is solid - Hal Holbrook gets very few scenes as the infamous informant "Deep Throat", while Jason Robards does rather well as Ben Bradlee, the editor who encourages the two leads to keep fighting the good fight through a crusty, world-weary exterior. Good though he is, I'm still not sure he quite gives off the kind of captivating performance that would guarantee an Oscar win, but seeing as I've seen the rest of the year's nominees I guess he makes for a sensible choice. Other actors of note are scattered throughout the film in various small parts - though they get small roles, it's a testament to the writing how even the small roles work well.

Stylistically, this is very well-done with some stylish cinematography courtesy of The Godfather's Gordon Willis that perfectly evokes feelings of isolation, paranoia, and fatalism. Despite being over two hours long and having its fair share of quiet scenes, it never does stop being interesting, but conspiracy thrillers rooted in truth are always interesting at least (or at least I haven't seen any films that'd contradict that hypothesis yet). All the President's Men is just as great as I've been led to believe and I strongly recommend it to people who want a good classic thriller.