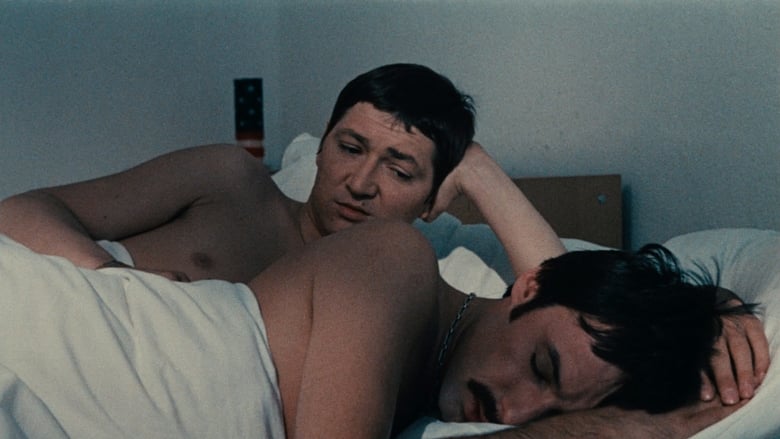 Fox and His Friends

Fox (Rainer Werner Fassbinder, who also wrote and directed the film) is a gay carnival worker whose boss, and lover, is arrested at the beginning of the film for tax evasion. Fox is a blue-collar worker that has very little education and absolutely no refinement whatsoever. He’s also rough around the edges and doesn’t prove to be all that sensitive of a man. One thing that he really loves is to play the lottery. The day that his lover is carted off, he meets a distinguished gentleman who wants to spend some time with him alone. On the way to their interlude, Fox begs the man to stop at a convenience store so he can buy his lottery ticket. The next thing we know, we are with Fox and his new socially elite friends celebrating his winning $500,000.

The person he likes most out of this new group of friends is Eugen (Peter Chatel), a handsome, young, gay man that lures Fox to himself. At first, Fox thinks he is the dominant man in the new relationship, and tries to take control of Eugen by intimidation. In time, Fox learns that he really is only a sheep in a den of elite wolves. They know the difference between salad and dinner forks, they can speak French, and know how to dress. Fox finds his self-esteem shrinking all the time, but seems incapable of doing anything about it other than watching himself in disbelief.

Fox and His Friends is an ironic title, because none of these people care about him. He is being fleeced and he seems more than glad to help them do it. If he tries to stop them, he only shows his ignorance, and that ignorance is what he is most ashamed of.

I felt for Fox, and could relate to him after a fashion. I’ve personally been in situations that were over my head by being with serious gangsters with guns. You seem them smirk and can tell that the private joke between them is all about you, but fear stops you from saying anything. It just might start something that you’re afraid of, and all hell can break loose. The acting by all concerned in the film is spot-on. They had the looks between themselves and it was obvious that Fox could see it, but was afraid to acknowledge it. He could only play along in a game that everyone was aware of and wasn’t about to disrupt.

Fox and His Friends isn’t a fun film, but rather a depressing tale of a loss of ones self. It also shows what can happen to a person that isn’t used to the white-collar wolves that inhabit our world, and who will surround you when you gain means quickly. At first, I didn’t like Fox, but could tell quickly that he was all an act. He was king of the mountain in his world and he figured that his rough and arrogant attitude would transfer itself easily into the new world he was so quickly thrust into. Unfortunately, he had no clue what he was in for.
» More about Fox and His Friends
» More reviews of Fox and His Friends
» More reviews by LordSlaytan