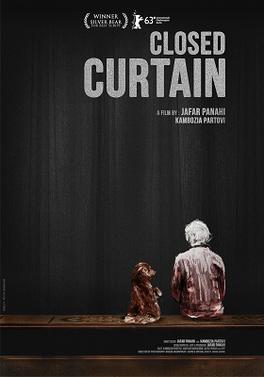 This film has thus far been neglected by the critical population at large. It's as though people have assumed that his 2011 masterpiece, This Is Not a Film, was his final, all encompassing statement. In fact, Panahi has only widened his gaze, and increased the complexity of his already formidable cinema. This Is Not a Film is reaction, outcry from someone who has just lost something. Closed Curtain is the deep, slow longing, and yearning of someone who is attempting but failing to come to terms with what his life is now.

But, we must not forget, Panahi is making a film, his second since his ban from filmmaking. His third is currently premiering in festivals in Europe. This means he's living with paranoia, which is heavily and poignantly expressed in the film (the only film I can think of that expresses it better is Out 1). But the fact of Panahi's continued success is also a statement of privilege. Here, he seems to realize this, that his filmmaking is now a privilege and thus a responsibility. And he struggles with this thought. His cinema is now the voice of many people, of those who cannot express like he who has been given the fragile privilege to express. His cinema is now the cinema of the oppressed. But what can his cinema do, confined to the space of a single (and notably large) home, a singular canvas?

Like his mentor, Abbas Kiarostami, Panahi attempts to express the realities of his world, of the Iranian world, of our world, via the off-screen space in the frame. The power (or a power) of cinema is not in its ability to express, but in its ability to withhold expression. If This Is Not a Film was depressing in its expression of personal anguish, Closed Curtain is depressing in its stark and emotional (but logical) conclusions. The final statement of the film is simply that film is not enough.
» More about Closed Curtain
» More reviews of Closed Curtain
» More reviews by bluedeed