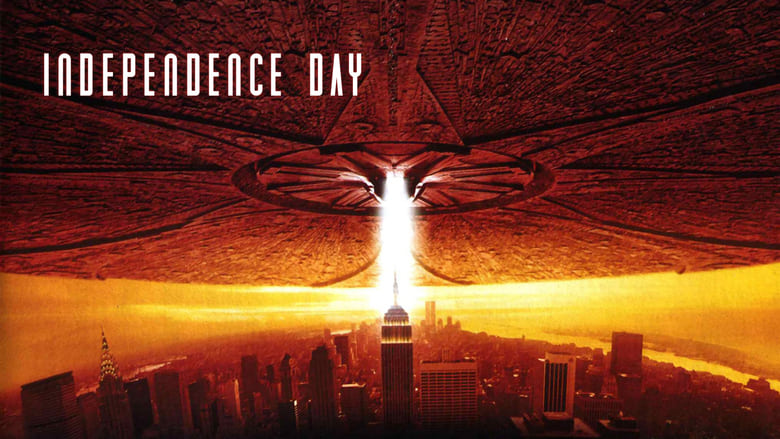 by The Rodent
posted on 6/05/14
in
Independence Day

A huge alien craft takes orbit around Earth and drops hundreds of city sized saucers onto the Earth that take their place hovering above all of our major cities.
Called into action is USAF Pilot Will Smith and scientist Jeff Goldblum to save the day, teaming up with the US President Bill Pullman.
Hence lots of Dogfights between Smith and the alien fighters and a big finale on the alien mothership.

It’s another simplistic alien attack movie and a disaster movie to boot. Emmerich basically made his name with ID4 and he really deserves the credit.

The plot is simple, the dialogue is even more simple and the writing is even more simplistic but, the way the movie is played out on screen, mixed with absolutely top notch effects makes a perfect popcorn no-brainer effects laden disaster epic.

Emmerich’s usual stereotypes of other non-USA cultures is present again and their dialogue also hits unintentionally funny but it’s still lots of fun.
Some of the dialogue reaches cringe-worthy at times, coming close to the olde saucer-film speeches.

The CGI and miniature work is bang on the money though. The good thing with ID4 is that there are practical effects involved, rather than Hollywood’s recent attempts at all out CGI.
The aliens too are a welcome addition. They’re very well designed and really quite spooky at times.

The action is also top notch, the dogfights between alien craft and USAF fighters is really exciting.

Will Smith as USAF Pilot Hiller is at his usual, loud, fun and energetic self. He’s lots of fun and you can tell he had fun during filming.
Jeff Goldblum is another plus point. His ‘cable repairman’ and scientist David Levinson is engaging and funny and he really hits the serious notes when needed.

All in all, another no-brainer CGI laden disaster movie from Emmerich but unlike all of the others of his that I’ve reviewed on here, this one really hits all the right notes. Fun, loud, brash and needs to be watched with sugary drinks and snacks.
My rating 88%