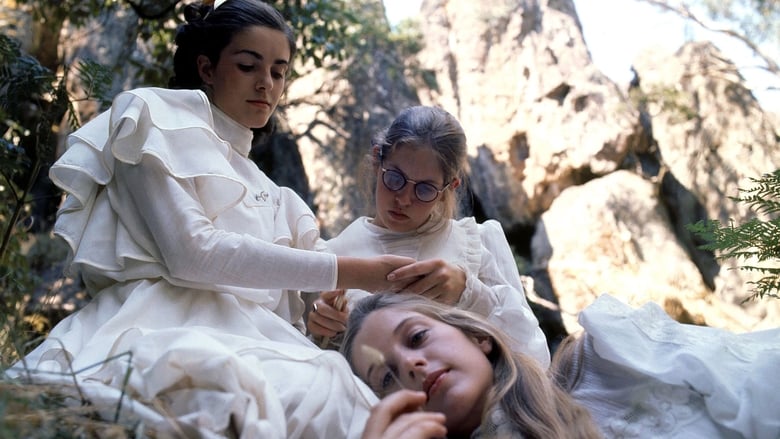 
I saw the Director's Cut version, where Peter Weir eliminated around 7 minutes of play from the original theatrical release. I read several opinions from people who deplored such move because they judged it harmful to the original quality of the movie, I don't know if this is why I failed to connect or to feel engaged in the experience... a shame. Shame because in retrospective I realise that Picnic at Hanging Rock was one of the most enriching cinematic experiences I ever had, I'll explain why in a bit.

Picnic at Hanging Rock reminds me of Caché from Michael Haneke and L'Aventura from Michelangelo Antonioni, 3 films where we are haunted by unsolved mysteries, but each one with a different premiss. The australian film seems to be the one that truly focuses in exploring the emotional and psychological effects that the elements of mystery and the inexplicable have upon the human subject and does it in a very sagacious manner. This movie plays an admittedly manipulative game with the viewer, the less attentive might be led to believe that the depicted events actually happened in real life (like me in the first view). The mystery is about the disappearance of 4 people, 3 young girls and 1 woman, in the whereabouts of a geological formation known as Hanging Rock and the movie depicts, up to a certain point, the efforts that the local community goes through to find the missing ones and the influence the tragedy exerts upon certain characters. But a more careful look reveals that we are in fact observing a work of pure fiction with possibly another layer of meaning underneath the main coating and there are even some prophetic revelations before the impossible disappearance phenomena. Right at the beginning the premiss of this work is conveyed through a voice over citing a beautiful phrase inspired by a poem from Edgar Allan Poe in which the keyword is "Dream", the gist is to make us experiment a surreal universe where the convoluted logic of the reality is reminiscent of dreams with everything it brings as emotional and psychological imprint. This is not done in a literal way ŕ la David Lynch. Instead in a subtly evocative fashion because the bizarreness is not immediately obvious to the viewer, it is suggested and unraveled little by little while the depicted world never departs from its realistic and coherent appearance at the surface even if frustratingly hermetic for those expecting or hoping to see the mystery solved.

Until we arrive at the scene which, in my opinion, is the culmination of Picnic at Hanging Rock, it was this instance that made the "click" in my head where I really understood the premiss of this film - the out of nowhere and unexpected collective hysteria in the dance class demanding explanations to a key piece of the mystery that had been rescued alive but makes no attempt whatsoever to clarify about what happened. Seems like Peter Weir deliberately wanted to repress and frustrate our impetus to know the truth throughout the movie so that he could forge this brilliant scene where, in a way, he gives us what we really want to see after so much ceremony but where at the same time he truly assumes the exploitive and dreamlike nature of this work, it's clear to me because what happens here is highly unlikely in reality so there has to be a second meaning. I loved this cinematic execution because it was something new, I never experienced this before in cinema, at least not in this way so subliminally alluded by the plot itself. In this scene (which has made its way to my favorite scenes list and seems carved out of a Lynch masterpiece) the film becomes self-evident to me - here several key characters of the story are developed in ways that allude to the perspectives (role and intent) of the public (us viewers) and performer (director) through their actions and the way they are treated. This is where the film basically tells us that it is performing a perverse exploitation of our own feelings and attention, so it becomes self-evident. What impresses me is the amount of thought and craft put into it to work so well, it's genius. Perverse exploitation because the film makes it clear that it won't give us any satisfaction, this is a game where the director is in dominant position, it's his film so he dictates the rules. One might think that he "plays dirty" because he's only flirting with us and we remain in the blind (as if tied to a wall from where we cannot move) about the mystery leaving us all the more vexed... or not because it's now obvious that the movie is not at all about what happened to those vanishing girls. The game is practically over now, the film ends shortly after this scene. Not everyone will make the same reading as I do since this film is relatively open to interpretation and those who do might not go well along with this exploitive agenda and think that Weir is being unfair and arrogant, but not really because this movie is actually based on a novel and with such reaction one could fail to notice the extraordinary cinematic feat, in my opinion, from Peter Weir. I can't help but grin every time I watch this scene, it's so revealing and even hilarious that I can only contemplate in wonder.

There's one or two sub-plots whose significance or symbolism I don't feel comfortable discussing yet, but I believe all of it serves to support (or possibly illustrate) the movie's main perverse agenda. This movie has substantial thematic depth, nature is portrayed as an hermetic and potentially dangerous world to Men, the Hanging Rock, one of the main characters of the movie, is often presented in a sinister and haunting tone, animals are constant appearances even in the most improbable places and yet they are as much strange and oblivious to us as we are to them, plants can move, etc... It's apparent that the intent is to show nature as a world impossible to understand, not governed by the same rules as those of the world which humans have built for themselves to evoke the fear of the unknown and incomprehensible, specially around Hanging Rock. Maybe it could be said that Picnic at Hanging Rock is a Psychological Horror movie, and there are indeed a few creepy and disturbing moments, it has elements of Drama, Mystery and Horror. In my opinion, it's above all a self-evident manipulative endeavour intending to engulf us in a pseudo-dreamlike experience and doesn't reduce itself to any particular genre.

So why didn't I feel engaged in this movie? If I see it again (I saw it 2 times before writing these impression) maybe it will have a better grip on me but I doubt... It wasn't the pseudo-dreamlike experience it was supposed to be, I didn't find it boring to watch but I didn't enjoy it either... I think my main issue is with the overall style of the movie and lack of polishment in some acting subjects, it seriously distracts me sometimes. I never manage to extract anything appreciable, or beautiful, or interesting while I watch it (except for that brilliant scene and a few creepier moments), I've seen a lot of praise for the cinematography but I honestly didn't care. The notable soundtrack works to build the singular feel of the movie as much as it does to enervate and distract me often. I will certainly give it another go and try to tune into it, there's a lot to love and admire here and I want to have the complete package by fully engaging in the experience, but I will also search for the theatrical version which many say it's better.