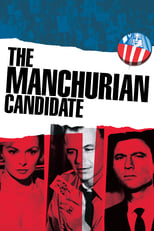 Release: Oct. 24th, 1962
Runtime: 2 hours, 6 minutes
Near the end of the Korean War, a platoon of U.S. soldiers is captured by communists and brainwashed. Following the war, the platoon is returned home, and Sergeant Raymond Shaw is lauded as a hero by the rest of his platoon. However, the platoon commander, Captain Bennett Marco, finds himself plagued by strange nightmares and soon races to uncover a terrible plot.

TheUsualSuspect It was pretty early on in the film where I figured I was going to like The Manchurian Candidate.
READ REVIEW

Iroquois She definitely becomes a defining presence in an otherwise male-dominated film (even Janet Leigh's presence as Sinatra's companion seems rather inconsequential), though it's not like Sinatra and Harvey don't put in sufficiently wide-ranging performances of their own.
READ REVIEW
View All (5)