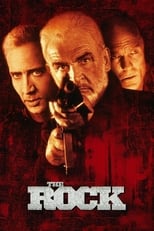 Release: Jun. 6th, 1996
Runtime: 2 hours, 16 minutes
FBI chemical warfare expert Stanley Goodspeed is sent on an urgent mission with a former British spy, John Patrick Mason, to stop Gen. Francis X. Hummel from launching chemical weapons on Alcatraz Island into San Francisco. Gen. Hummel demands $100 million in war reparations to be paid to the families of slain servicemen who died on covert operations. After their SEAL team is wiped out, Stanley and John deal with the soldiers on their own.

Gatsby Sure, the plot about Alcatraz and our heroes trying to do something with typical scientific weaponry and theories in most 90s action films is already laughable and drags the film down, but it isn't Transformers where the story treats itself like a sci-fi semi-existentialism film.
READ REVIEW

JayDee That film was The Rock, a film that actually shares many of the same elements as his other work - loud explosive action, buddy relationships, half-hearted attempts at romance etc; elements that have generated numerous disappointing entries in Bay's catalogue of films.
READ REVIEW