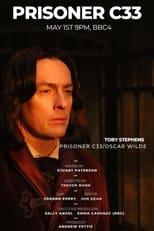 Release: May 1st, 2022
Runtime: 1 hour, 10 minutes
In 1895, in cell 3, floor 3, in Reading Gaol, we find Prisoner C33. Starved, thin, and with his hair crudely hacked short, he is confined alone in this dark cell, denied water to wash himself with and refused access to a toilet. Prisoner C33 – real name Oscar Wilde – is a dramatist of genius, poet, wit, novelist, husband, father of two children and, until recently, the darling of London society. He has been imprisoned for the crime of having...

We didn't find any linked discussions for this film. Here are the results of a quick search of possibly related threads:
2 AMC The Prisoner (2009)
I'm curious if anyone remembers this series from AMC? I just stumbled upon it (the series name) after having been passively looking for the title for the better part of a decade. All I could remember ...
0 Wooden tooth used by prisoner?
What movie did a prisoner eat with a homemade wooden tooth? I thought Dustin Hoffman did it in original Papillion but just watched it and not there. I seem to remember it took place in a pit....
126 Harry Potter and the Prisoner of Azkaban
Directed by Alfonso Cuaron, the third movie in the Harry Potter series is going to hit screens 2004. This time, the cast adds another of my favorite actors, Gary Oldman. (This is in addition to Ala...
5 Odd semi-pornographic prisoner of war film
Hello folks, I've been given the task of trying to find out the name of a film, but I only have certain bits of information. From what I've been told, two soldiers (of undisclosed nationality) a...
0 Prisoner gets bad treatment from prison guard
A prisoner is subjected to cruel behaviour from prison guard/warden. Eventually prisoner gets transferred to another jail thinking his problems are behind him only to find the same prison guard/warde...