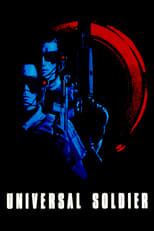 Release: Jul. 10th, 1992
Runtime: 1 hour, 42 minutes
An American soldier who had been killed during the Vietnam War is revived 25 years later by the military as a semi-android, UniSols, a high-tech soldier of the future. After the failure of the initiative to erase all the soldier's memories, he begins to experience flashbacks that are forcing him to recall his past.

7 Universal Soldier: Day Of Reckoning
...
5 Universal Soldier reboot
"Universal Soldier will receive a modern update from The Equalizer writer Richard Wenk. Universal Soldier is a 1992 cult action film pitting Jean-Claude Van Damme against Dolph Lundgren. The...
65 Universal, HD-DVD and Blu-Ray
Universal is so freaking stupid. See HERE. ADMIN NOTE: this discussion originally took place in The Shoutbox....
13 Universal loves ya! and thanks to all!
Remember when I asked everyone to give me their suggestions for DVD sets and menu special features? Well, I got a letter from the DVD Division at Universal in regards to your ideas. Here it is, in p...
1 Universal Solierd
It`s upcoming, it`s downcoming, it`s already here? I don`t know. DVD premiere in Germany is in May. Found no thread about it. Looks good. ...

Iroquois I can understand why the military might want to use deceased soldiers as the guinea pigs for experiments designed to yield a more powerful commando, but you'd think that there would then be an explanation for why they're using dead soldiers from the Vietnam War despite taking place in the film's ear....
READ REVIEW

JayDee And yes perhaps there is something to that, but as you may have gathered from the reviews in my Van Damme season thus far I actually like Van Damme and so don't really feel the need to take shots at him.
READ REVIEW

The Rodent Jean-Claude Van Damme Vs Dolph Lundgren, both on 'supersteroids' is really exciting, especially after the successful character build up and the connections they have to the audience.
READ REVIEW