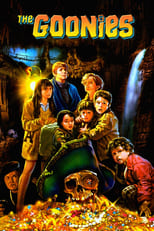 Release: Jun. 7th, 1985
Runtime: 1 hour, 54 minutes
A young teenager named Mikey Walsh finds an old treasure map in his father's attic. Hoping to save their homes from demolition, Mikey and his friends Data Wang, Chunk Cohen, and Mouth Devereaux run off on a big quest to find the secret stash of Pirate One-Eyed Willie.

We didn't find any linked discussions for this film. Here are the results of a quick search of possibly related threads:
2 Goonies 2
Has anyone else heard about this? They are proposing to do a sequel to one of the best kid action/humor films ever! I don't know...I mean even though the Goonies is one of my favorite films ever, ther...
19 Goonies 2
It pains me to use TMZ but this is a thing. I find it incredibly interesting. Any thoughts on a Goonies sequel?...
1 Goonies DVD Commentary Questions
I'm the new thread King today!! In the Goonies DVD commentary, I was wondering if anyone had an explanation for the absence of Sean Astin halfway through the movie. About 20 minutes into the fi...

Gideon58 Spielberg and Chris Columbus' screenplay is overly intricate, offering perhaps a bit too much detail, resulting in the film's over length and multiple endings which are hard to endure because the story works so hard at making us love these characters that we know there's only way for the story to en....
READ REVIEW

The Rodent Upon stumbling around in the attic of Mikey and Brand's (Astin and Brolin) house, the group find treasure maps and an old doubloon artifact that seems to point the way to an olde local Urban Myth called One Eyed Willie's Treasure.
READ REVIEW