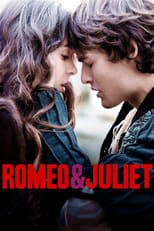 Release: Sep. 12th, 2013
Runtime: 1 hour, 58 minutes
In Verona, bad blood between the Montague and Capulet families leads to much bitterness. Despite the hostility, Romeo Montague manages an invitation to a masked ball at the estate of the Capulets and meets Juliet, their daughter. The two are instantly smitten but dismayed to learn that their families are enemies. Romeo and Juliet figure out a way to pursue their romance, but Romeo is banished for his part in the slaying of Juliet's cousin, Tybalt.

3 Romeo + Juliet SE DVD-ROM problem
I tried to access the script to screen however I cannot seem to find a play button to play the video. I can view the script/play though. Can anybody tell me where the buttons are? And how do I sto...
1 William Shakespeare's Romeo + Juliet
I'm a big Baz Luhrmann fan now. Moulin Rouge was so great, it made me seek out Strictly Ballroom, which is even more extraordinary. But my relationship with Baz started on a sour note with his versi...
7 gnomeo and juliet
i just watched gnomeo and juliet. it was a great movie! ( i'm a fan of animated films!)...